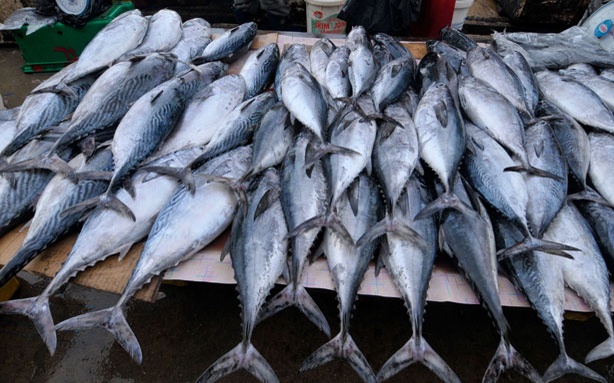 The World Wildlife Fund released a new report on biodiversity and human interaction with the planet, but there’s one map in particular, highlighted by The Washington Post, that shows just how much damage we’re doing. The map below, taken from the annual Living Planet report, demonstrates how much fish we’re pulling out of the ocean today compared to the middle of the previous century.

As you can see, the amount of fish we harvest each year has skyrocketed (from 19 million tons to 87 million tons), but with improved techniques and increased production we’re now in danger of depleting fish stocks all around globe. Some major commercial fish, like the bluefin tuna are being pushed to the brink of extinction and many others are near “collapse,” which means a catch dropping to less than 10 percent of peak catch. We’re eating them faster than they can replace themselves and our propensity to harvest fish at the top of the food chains, trickles down to affect the entire ecosystem of our water.

Targeted fishing of top predators has changed whole ecological communities, with increasing abundance of smaller marine animals at lower trophic levels as a consequence of the larger species being removed. This in turn has an impact on the growth of algae and coral health.

The overall theme of the report is that we’re burning through our food resources at an unsustainable rate. (The WWF says we’re consuming the equivalent of one and a half Earths every year.) The good news is that it isn’t too late to reverse the trend, without cutting out fishing and eating fish altogether. The bad news is that attempts to place strict quotas on fisherman have been undermined by lobbying efforts and a lack of international consensus. No one wants to slow the speed with which we harvest the oceans, but if we’re not careful, the oceans will do that job for us.