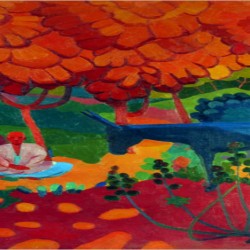 MOSCOW — Later this week moviegoers in New York will learn the strange story of Igor V. Savitsky, an obsessive collector credited with saving tens of thousands of avant-garde artworks from Soviet authorities who forced artists toward Socialist Realism in the 1930s. 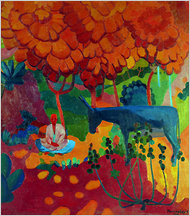 “Crimson Autumn” (1931), by Ural Tansykbaev, at the Nukus Museum in Uzbekistan. The museum is the subject of a documentary, “The Desert of Forbidden Art,” opening on Friday 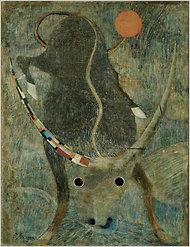 The Nukus Museum in Uzbekistan houses one of the world’s largest collections of Russian avant-garde art, deemed decadent and bourgeois by the Stalin regime. Paintings there include “The Bull,” by Vladimir Lysenko. 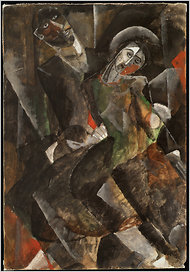 Lev Galperin’s “On His Knees.”

“The Desert of Forbidden Art,” an American-made documentary, will try to draw international attention to Mr. Savitsky’s life’s work: a museum in the parched hinterland of Uzbekistan that is home to one of the world’s largest collections of Russian avant-garde art. Until now the museum has been known chiefly to journalists and art lovers who returned from the remote city of Nukus with a dazed look and a remarkable tale, as if they had stumbled into Ali Baba’s cave.

It would not seem the time for an official crackdown.

But late last year Uzbek officials abruptly gave the Nukus Museum 48 hours to evacuate one of its two exhibition buildings, so staff members ended up stacking hundreds of fragile canvases and paper works on the floor of the other space. The building has since stood empty, its fate unknown, and more than 2,000 works are no longer on view at the museum, more formally known as the Karakalpakstan State Museum of Art. The museum’s director, Marinika M. Babanazarova, who has fiercely guarded the collection for 27 years, was not permitted to travel to the United States for a trip that was to include a screening of the documentary at the National Gallery of Art in Washington.

And over the last year Ms. Babanazarova’s staff members have undergone 15 government audits, in which they have repeatedly been asked to explain their travels overseas and the nature of their contacts with foreigners, she said.

“We have to prove that we are doing something good for the country, that we are not a gang of bandits,” said Ms. Babanazarova, 55, who has run the museum since Mr. Savitsky’s death in 1984. “It’s a great satisfaction that we are getting international recognition. On the other hand, it complicates our lives, to be honest.”

Officials from the Foreign Ministry and Culture Ministry in Uzbekistan did not respond to written questions submitted last month by The New York Times.

In the 1990s, when Western journalists and diplomats first happened upon the museum, it seemed like the beginning of an art-world fairy tale. Hanging in crude frames were vivid, saturated works that ran the gamut of early-20th-century styles, from Fauvism and Expressionism to Futurism and Constructivism. The Savitsky collection promised to fill in a missing chapter of art history, chronicling mostly forgotten Soviet artists who were exploring new directions before the early 1930s, when the Stalin regime condemned “decadent bourgeois art” in favor of idealized paintings of factory and farmworkers.

Some of the artists complied; some were locked up as dissidents; their work wound up in attics and storerooms. It might have remained there except for Mr. Savitsky, who persuaded their families to entrust him with the canvases and carried them back in massive rolls to Nukus, the city he made his home after visiting it as part of an archaeological expedition.

“It’s an extraordinary collection because it really does tell the story of the twilight zone of the Russian avant-garde,” said John E. Bowlt, director of the Institute of Modern Russian Culture at the University of Southern California in Los Angeles. “It’s a kind of diary, and a very sad one.”

The outside world took notice of the discovery. In 1998, after The New York Times ran a lengthy article about the museum, a group of 85 artists and scholars chartered a flight from New York to see the collection. Curators in Germany and France arranged to exhibit parts of it in Europe, and museums in the United States and Russia seemed to be next in line.

“The collectors from the West started to come in their private planes, bringing bags of money, showing this to us,” Ms. Babanazarova told the filmmakers. “Of course, they had very good taste, we understood this immediately — they wanted the best pieces.”

Her friends urged her to sell a few paintings, if only to provide better conditions for the rest of the collection. But Ms. Babanazarova refused, partly out of fear that one sale would prompt the government to auction off the best works.

More than a dozen years later the collection remains intact. But it also remains hidden from the public. After exhibitions in Germany and France in the 1990s, the Uzbek Ministry of Culture has consistently refused invitations to display the collection overseas, Ms. Babanazarova said. (One exception was three paintings now on view in the Netherlands.)

There has been no clear explanation for this policy, but it may reflect Uzbeks’ lasting ambivalence toward Russia’s imperial influence. Independent since 1991, Uzbekistan vigorously promotes native art forms like weaving and engraving. The works in Mr. Savitsky’s collection — many made by ethnic Russians — have no place in that campaign.

“Despite all the publicity, it’s dormant,” Mr. Bowlt said. “It’s a shame — there are so many extraordinary paintings by virtually unknown artists that deserve to be talked about, written about. It hasn’t happened.”

Uzbek authorities have shown bursts of support for the collection. In 2003 President Islam A. Karimov himself came to Nukus to inaugurate a new museum building, which Ms. Babanazarova called “one of the best buildings in the country,” and Mr. Savitsky received a posthumous state honor. And last year the Foreign Ministry of Uzbekistan financed its own documentary on the Savitsky Collection, which will be shown in Uzbek embassies in a bid to attract tourists to Nukus.

Nevertheless, one day last November when Ms. Babanazarova was out of town, officials backed up trucks to the museum’s old exhibition building and ordered workers to remove all the artworks, saying the building, which dates to the 1950s, would be demolished as part of an urban renewal project. David Pearce, chairman of the Friends of the Nukus Museum, a nongovernmental organization, said a deputy minister of culture assured him late last year that the state planned to build new space to replace what was lost, and that it would be ready by this fall. But months have passed with no evident progress.

Museum supporters — who include current and former Western diplomats — say they have no idea what the government is planning. Some suggested that Ms. Babanazarova had run afoul of officials because of her fierce defense of the collection or her independent contacts with foreigners.

“I think it’s sort of ignorance and circling the wagons, it’s fear,” said Amanda Pope, a director of the new American documentary, with Tchavdar Georgiev. “No one will explain.”

“The Desert of Forbidden Art” outlines various threats facing the collection, including the fear that the best paintings will disappear into private hands, but it does not include the most recent developments. The directors said they especially worried about what would happen without the efforts of Ms. Babanazarova, a tenacious woman whose grandfather served as the leader of the region. They also hoped that their film would revive efforts to exhibit the works in the West.

But on the eve of the film’s New York release on Friday at Cinema Village, in Greenwich Village, officials in Uzbekistan were questioning Ms. Babanazarova repeatedly — asking her “to prove that we are not doing anything bad,” as she put it.

Asked what prompted the scrutiny, Ms. Babanazarova said she had no idea. But she speculated that officials’ wariness might simply reflect the nagging strangeness of the Savitsky story — the sequence of events that resulted in a collection of extraordinary value being housed in the middle of nowhere.

“They don’t believe it — that some oddball Savitsky put it together, and then a new group of oddballs are preserving the collection,” she said. “Something about it doesn’t make sense to some officials.”