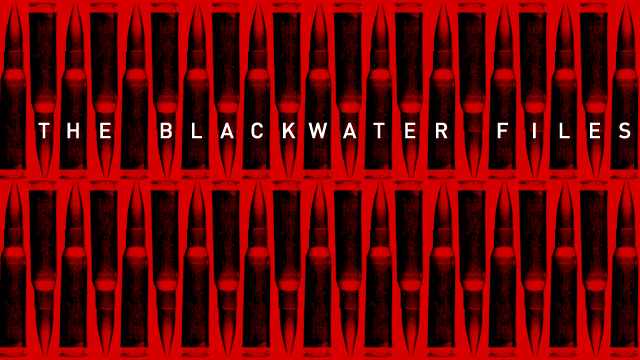 Every time a Blackwater centurion discharged his weapon in Iraq, the company filed a written report with the U.S. State Department. Blackwater shot Iraq to shit. Here are the reports.

Blackwater, the private mercenary firm that became synonymous with Bush-era war profiteering and reckless combat-tourism, announced yesterday that it has changed its name to Academi (after a previous incarnation as Xe Services) in a bid to distance itself from its history of wanton lawlessness. We’ve obtained a 4,500-page record of that history in the form of State Department incident reports documenting every time a Blackwater guard shot at an Iraqi between 2005 and 2007.

We got them in response to a Freedom of Information Act request we filed four years ago. They come from the State Department’s Bureau of Diplomatic Security, which was charged with overseeing and monitoring the contractors hired by State to secure its diplomats and other VIPs in the war zone. While firms like DynCorp and Triple Canopy make frequent appearances, the reports are dominated by Blackwater, which was paid roughly $1 billion between 2004 and 2009 to provide “worldwide protective services” for State Department personnel. (It continues to surreptitiously weave its tentacles into various government contracts; hence the name changes.)

In Iraq, Blackwater’s “protective services” consisted in large part of preemptively shooting any car that drove near its convoys. Page after page of the reports feature drivers (and occasionally boat pilots) who were fired upon simply because they drove “aggressively,” attempted to pass, or didn’t heed warnings to keep their distance. There was no routine mechanism for following up with the drivers to determine if they were injured or were actually hostile. Blackwater (and DynCorp and Triple Canopy) guards roamed Iraqi cities and highways, ignoring traffic rules and shooting at other drivers literally at will, and driving on. According to a 2007 investigation by the House Committee on Oversight and Government Reform, between 2005 and 2007 Blackwater operatives fired on Iraqis at least 195 times, or an average of 1.4 times per week. That included an infamous Baghdad firefight at Nisour Square that killed 17 civilians.

Much of what these files contain has already been reported—the authors of the Oversight Committee report appears to have had access to them, and various reporters have covered some of the incidents they record. But as far as we can tell, the documents themselves have never been published in their entirety. We have only been able to read a few random slivers of the 4,000 pages—we’re posting them here for readers and researchers to pore over and help us find untold stories—but here’s some of what we’ve been able to find.

Shot at for Using a Cell Phone

On February 19, 2007, a Blackwater motorcade carrying a dignitary to a local juvenile prison was attempting to make a left turn when a parked white four-door sedan entered oncoming traffic. “The lead [vehicle’s] rear gunner…noticed that the lone occupant had a device in his hands,” reads a report on the incident. “Suspecting that the vehicle may be a Vehicle-Born Explosive Improvised Device, [redacted] fired one round from his rifle into the grill of the suspicious vehicle…. The impact of the round caused the driver to bring the vehicle to an immediate stop. He raised his hands in the air revealing that he held a cell phone.” The same Blackwater team fired on cars three other times that day.

“Any Disciplinary Actions Would Be Seen as Lowering Morale”

In February 2005, a Blackwater team fired hundreds of rounds at two different “aggressive” cars during an operation in Baghdad. Team members subsequently told State Department investigators that 1) one of the cars’ occupants fired on them, striking a vehicle in the motorcade, and 2) one of the cars was on a Be on the Lookout (BOLO) list as a suspected insurgent vehicle. Both were lies. Investigators later found that bullet holes in the Blackwater vehicle had been caused by friendly fire and that none of the Blackwater guards involved could recall the make or model of the car that was allegedly on the BOLO list, making it impossible for them to have known such a car was on the list. (The team’s leader told one investigator that he always claimed that cars he fired on were on the BOLO list, whether they were or not. Indeed, the vast majority of shooting reports claim that the target vehicles were on the BOLO list.)

State Department investigators came to the conclusion that the Blackwater team was unjustified in firing on the cars, coordinated their stories to avoid suspicion, and lied about it later. So what it it do? “[Investigating agents] concluded that several of the…individual [sic] involved in the shooting provided false statements to the investigators as well as failed to justify their actions. When investigators briefed [the State Department Regional Security Officer] on their findings and inquired about what disciplinary actions were to occur, RSO informed the investigators that any disciplinary actions would be deemed as lowering the morale of the entire [personal security detail] entity.” No one knows if the occupants of the targeted cars were injured of killed. USA Today has previously reported the incident and lack of disciplinary action.

“Well Gentleman, We Shot a Judge”

On July 16, 2007, a DynCorp (not Blackwater, but still) convoy traveling near Erbil fired five shots at a red Isuzu because it was driving “at a fast pace” toward the caravan and failed to heed warnings to keep back. According to an after-action report filed by one of the shooters, the driver pulled over, “got out of the car,” and “appeared to be OK.”

In fact, he was shot in the leg. And he was an Iraqi civil affairs judge. The incident resulted in a $2,500 payment to the judge for damage to his vehicle and formal letters of protest from Kurdistan’s minister of justice and the Kurdistan Judges Union. But not an apology: The State Department determined that shooting at judges for driving too fast in their own country is “within the established Department of State policy for escalation of force.” One State official wrote in an email to his colleagues that the DynCorp guards did exactly the right thing:

Well gentlemen—I met with the Director this morning; as such, I am convinced that we shot the re-colored SUV driven by [redacted], a civilian affairs judge in kaler [sic] court, who was transported to the emergency room with a minor bullet wound to the leg.

I am certainly not questioning the judgment of the PSD members involved in this incident; in fact, the contrary. Based on my review of the reports… the PSD members did exactly what they should have done and we should hope they react similarly if presented with the same scenario in the future.

The judge case is illustrative because the initial reports in almost all of the shootings we looked at included language along the lines of “the driver did not appear to be injured” or “the driver appeared to be OK.” In the Erbil shooting, obviously, that wasn’t true. Since there was almost never an effort to track down the victims of contractor shootings—which in effect means Blackwater left hundreds of presumed insurgent suicide bombers on the streets after disabling their cars with shots to the engine block—it’s impossible to know how many were actually injured or even killed.

A July 2007 email from one State Department official to several colleagues—apparently in reference to the judge’s shooting—openly worried about contractor teams indiscriminately shooting their way around Iraq:

When was the last time we…looked into all the other contractor PSD elements running around Iraq? I’m hearing stories of quite a few PSD elements moving from Mosul to Irbil firing up to 50 rounds per move and using bullets like we use hand and arm signals, flashers, or a water bottle. [Security teams would often toss plastic water bottles at the windshield of a suspicious car to get the driver’s attention—Ed.]

It doesn’t appear that anyone wrote him back or addressed his concerns.

“Several New York Times reporters were saddened to learn that their favorite dog had been shot.”

Shortly before Christmas 2007, a Blackwater team went to the New York Times compound in Baghdad to conduct a security sweep it in advance of a dignitary’s visit. They encountered a stray dog that the Times‘ security team had raised from a pup. And (as Reuters reported at the time) shot it.

The dog became aware of [Blackwater’s K-9] and became extremely aggressive, lunging at the K-9 and prompting the k-9 handler to place his body between the two dogs and draw his pistol. The K-9 handler and another [personal security specialist] assigned to cover him shouted at the stray dog, kicked it, and struck it with a [redacted] muzzle to try to repel it, but the stray dog would not back off. [T]he PSS member shot the stray dog with two [redacted] rounds.

After killing the “stray” dog, the Blackwater team learned that it was in fact was a pet and “basically a mascot…. Several New York Times reporters subsequently came out of the residence and were saddened to learn that their ‘favorite’ dog had been shot. [Redacted] spoke to [redacted] and the reporters and did a good job smoothing things over and de-escalating the situation.”

All 4,500 pages of reports are embedded below. As we mentioned previously, we haven’t read them all, but they don’t appear to include some high-profile events, like the Nisour Square shootings (presumably because the State Department considers them to still be under investigation and exempt from the FOIA).

We’ve uploaded them to Document Cloud, an excellent service that allows readers to search and annotate documents and send around links to specific pages. So we encourage you to peruse them and flag any interesting incidents worth following up on.