The return of Vladimir Putin

The once and future president

It may bring clarity over who is in charge, but it will still be bad for Russia 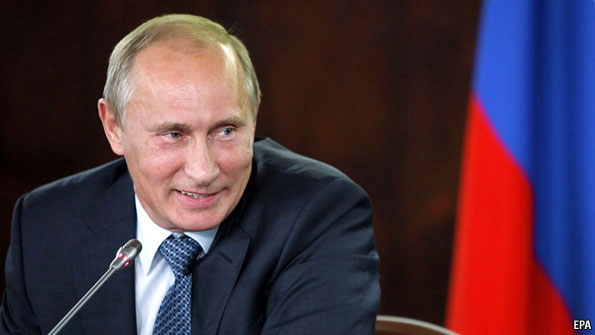 IT WAS hardly a surprise when Vladimir Putin told his United Russia party conference on September 24th that he would run for the presidency next March. After all, he had put Dmitry Medvedev, the incumbent, into the job in 2008 only because the constitution sets a limit of two consecutive terms. Mr Putin likes to cite the precedent of Franklin Roosevelt, who was elected American president four times. After the Medvedev interregnum, he could have two further terms, staying in power until 2024 (see article). That would make him his country’s longest-lasting leader since Stalin.

There is no doubt that Mr Putin will win the election. Russia’s “managed democracy” keeps television under tight control and suppresses genuine opposition, allowing only sham candidates to run. Besides, Mr Putin’s popularity rating remains high, thanks to the stability and growth he claims to have delivered and his tough-guy defence of national interests. The only surprising part of his announcement was the plan to make the ineffectual Mr Medvedev his prime minister—news that led to the grumpy resignation of Russia’s veteran finance minister (and fiscal hawk), Alexei Kudrin, which upset the financial markets (see article).

Mr Putin’s return to the Kremlin will have one clear benefit: ending any doubts over who runs Russia. Indeed, it should dispel all illusions about the regime. Plenty of optimists hoped in 2000 that Mr Putin would bring not just stability but also reform. When they were disappointed, many placed naive faith in Mr Medvedev after 2008. He was a more palatable interlocutor for the West than Mr Putin had been. And, although Mr Putin as prime minister was still the real boss, Mr Medvedev pleased liberals by speaking out on the need to rein in corruption (even in Mr Putin’s circle), strengthen the rule of law and modernise the economy. But talking is not acting. Under Mr Medvedev, Russia’s system of crony capitalism, entrenched corruption, a powerful security service and the absence of any rule of law has continued unchecked.

This dire combination seems sure to persist through Mr Putin’s next presidency too. But his rule will not be trouble-free. Putinism has been propped up by high and rising prices for oil and gas, which have underpinned high economic growth and rising living standards. With the gloomy outlook for the world economy, this is unlikely to last. Russia’s sharp recession in 2008-09 was a shock. A resumption of capital flight and the depressed mood of middle-class Russians, not least because of corruption, are added warning signs. Abject failure to modernise or liberalise the economy in the past decade has left it vulnerable to further and bigger shocks in the next one. Such weaknesses may make Russia unstable and nationalistic, which will make it harder for foreigners to deal with.

There is not a great deal that the West can do about this. It is ultimately for the Russians to improve (or one day replace) their rulers. Moreover, the West needs to engage with any Russian government on issues ranging from arms control to nuclear-weapons treaties, and from Iran to Afghanistan. It is thus worth persisting with the Obama administration’s “reset” policy, albeit without illusions. Equally, efforts to get Russia to join the World Trade Organisation should be stepped up, as its rules would usefully trammel the atavistic impulse within the regime to slide towards protectionism.

A bear with a face-lift can still eat you

Now that the idea that a conciliatory approach strengthens liberals (and weakens hardliners) in the Kremlin has been exposed as a myth, the West should take a tougher line on Russia. In foreign policy, that means supporting countries close to Russia, notably Ukraine, that want to escape its shadow. But one particular area where the West could be stronger (and ethical) is finance. It should hold Russian companies wishing to raise money in international markets to the same standards as Western ones, forcing them to say for instance who really owns them. It should refuse visas to dodgy individuals, however well-connected. The fact that Russia is so obviously being looted is no excuse for helping the looters.