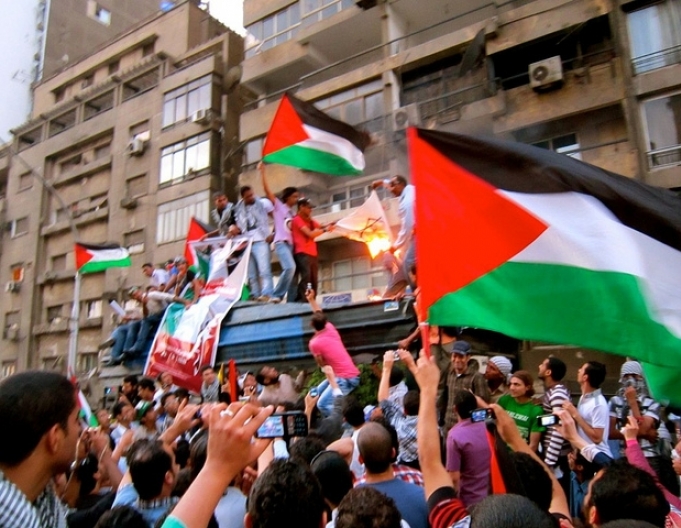 Thousands of Egyptians stormed the Israeli embassy. The ambassador had to be flown to safety in a military aircraft. In Ankara, too, Israel’s representative was driven out – by the government of Turkey, the host country. The Arab Spring has segued into an incandescent Arab Summer now threatened by a cold snap. New Arabia has slammed up against the old Middle East conflict — and the epoch-changing times in the Arab world could find themselves getting trapped in the well-worn trenches of the Israeli-Palestinian conflict.

It was to be expected that emotions in Egypt and other Arab Spring countries would roil as soon as there were no more autocrats and club-wielding police to hold such displays in check. For decades, differentiated debate about the Middle East conflict was not possible in these countries due to lack of freedom of the press, but also because of anti-Israeli Islamist propaganda. Peace talk rhetoric never reached Egypt. A cold peace ordained from the top down prevailed with Israel, which has clung to it even after it was clear Mubarak had lost power.

The assault earlier this month on Israel’s embassy in Cairo and the Eilat attack that killed eight Israeli soldiers in August confirm the fears of Benjamin Netanyahu’s government that Israel could be the loser in the new Middle East. And the situation is not helped by the fact that the intensity of the latest demonstrations in Cairo is rooted in several different causes including frustration at the stalled revolution and unkept promises of democracy and economic upturn.

This is fertile ground for radical agitators. In the days of the anti-Mubarak uprising, anti-Israeli rhetoric played no role; protesters knew what they wanted – the fall of the dictator. Now Mubarak, strapped to his hospital bed, is being tried, but Egyptians are still waiting for the payback for their efforts to overthrow him.

Into this vacuum marches a self-described adviser who used to lay stock in coming across as a model of democratic virtue – the Turkish premier. Only now, Recep Tayyip Erdogan plays hothead in the hopes of getting approval from the Arab side. War ships from his country will patrol the eastern Mediterranean more often, and aid convoys headed for Gaza will be protected. And now his trip to Cairo, where he’s hoping to win popular approval. Ankara has made assurances that NATO member Turkey is not forging any new flotilla plans against Israel’s Gaza blockade. But the relationship between Turkey and Israel has been so damaged that simple appeasements don’t count for much.

Responsibility, however, also lies heavily with the government in Jerusalem. To this day it is refusing to apologize for the death of nine Turks killed by the Israeli navy in May 2010 on the Gaza aid ship Mavi Marmara. A bit of the responsibility lay with both sides, but hardliners have prevailed in Israel and no admission to that effect has been made. A fatal error, because right now – post-Mubarak — Israel needs every friend it can get in the region.

The cold war with Jerusalem is a disaster for Turkey, too. Nothing remains of Ankara’s shining foreign policy role. And yet reasonable diplomats and credible negotiators are urgently needed. In a few days’ time, the Palestinians will carry their wish to have their own country to the UN table. They can expect a “no” vote from the United States — President Barack Obama, on whom the Palestinians formerly had pinned high hopes, is no longer supporting them. The Europeans are struggling to keep a united front so that discord doesn’t destroy what little remains of their joint foreign policy.

In this charged atmosphere the worst thing would be for the people of Gaza and Ramallah to be frustrated again. Anger could also grow in Egypt and elsewhere in the region if the Palestinians are refused what the Arab revolutionaries are fighting for in their own countries: autonomy, freedom, dignity.

A blind veto on the part of Israel or the United States will not bring the goal any nearer, and the Palestinians will have just as little success if they try to use pressure at the United Nations. Only real peace negotiations bring real peace. If Turkey and Egypt want to continue to play a credible role in this epic conflict then they too have to play by the rules. The first step should be to ask Israel’s ambassadors to return.