A revolution can take many forms and methods to achieve its objective. Usually, dissenters could use anarchy to hammer down a point, or initiate an armed struggle to wrestle power from the government.

Either way takes great effort to launch and succeed.

One Chilean just used a matchstick to wipe out all students’ debt. This practical approach should be replicated all throughout the world especially in America where the student debts have reached $1.2 trillion as of 2014, and is still growing.

It’s not uncommon to hear that the growth in student loan debt is like a time bomb threatening to blow up the U.S. economy. Now, you can watch it tick.

The outstanding balance of the nation’s student loans is growing by an estimated $2,726.27 every second according to the clock above developed for MarketWatch by StartClass, an education data site. As policymakers and pundits debate ways to tackle Americans’ $1.2 trillion in student loan debt, this student-loan debt clock provides a window into the growing risks to the economy as well as to student loan borrowers and their families.

Chilean activist and artist Francisco Tapia, also known as ‘Papas Fritas,’ has stolen and burnt $500 million worth of “pagares,” or debt papers. He then uploaded the video onto social media, claiming he had “freed” students by setting the papers alight.

The artist made his claim in a video that went viral on May 12, where he says that debt owed to the Universidad del Mar is now worthless.
The ashes of the burnt legal papers were later confiscated by police after they were displayed at the Centro Cultural Gabriela mistral (GAM) exhibition.

“It’s over, it’s finished. You don’t have to pay another peso [of your student loan debt]. We have to lose our fear, our fear of being thought of as criminals because we’re poor. I am just like you, living a shitty life, and I live it day by day – this is my act of love for you,” Tapia says in the five minutes of the video, parts of which were translated by the Santiago Times.

The theft and subsequent destruction of the documents happened during a ‘toma,’ or student takeover, of the campus.

Authorities began closing down Universidad del Mar last year due to financial irregularities, and while most of the students had to find an alternative school, the university is still collecting student loan payments. Now the owners of the university will have to sue each of the individual students – a very time consuming and costly process. 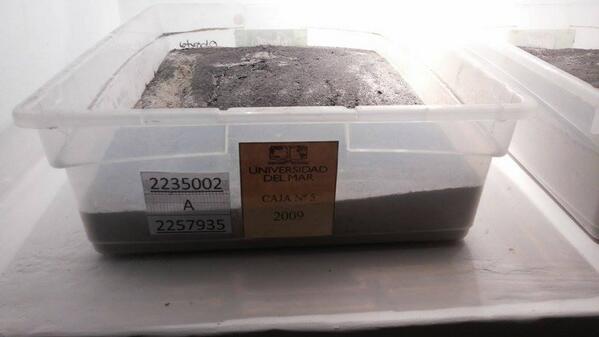 Papas Fritas’ video comes after tens of thousands of students protested outside the National Comptroller’s Office of Chile (General Accounting Office). It also follows a petition by the National Association of High School Students which demands that Nicolas Eyzaguirre carry out his legal responsibility to sniff out and sanction educational institutions that are making a profit.

There have been widespread protests in Chile since 2011, with students calling for reform of the university system and for free, high quality education. Newly elected President Michelle Bachelet waged an election campaign promising widespread change to education – but two months on, tens of thousands of students have again taken to the streets demanding she follow through on her promises.

Eyzaguirre is under pressure to put an end to profits being made in public education establishments. Although profit-making in education is outlawed by law, more than half of Chile’s students now attend publicly subsidized universities, which are privately run and for-profit, making Eyzaguirre’s task all the more difficult.

Seven institutions are already under investigation by the education ministry and Eyzaguirre will soon reopen probes into four more, El Mostrador newspaper reported.

On Thursday, several students from Arcis University stripped down to their underwear and jumped into a fountain outside the presidential palace in protest that their university was heading down the same path as Universidad del Mar, where the debt papers were stolen from.

Students from Universidad del Mar may actually get away with not repaying a single peso, as attorneys representing them will argue that the contracts were fraudulent in the first place. And Tapia may also get away lightly, as a clause in Chilean law means that because he has admitted what he did, he may get a suspended sentence and serve zero jail time.

The educational system today is being used to train slaves on the right way to run the machines that enslave them. Worse, they have to pay for it for years after graduation… with interests.

We can end this madness through non-participation. Get a piece of land, study permaculture, generate our own food, and live off grid.

Or, use a matchstick.

Indeed, achieving freedom is not that complicated.

Aside from the fiat monetary scam and bloodsoaked petrodollar, another significant source of funds for the Nazionist Khazarian Mafia is the “healthcare” industry which registered a whopping $3.09 trillion in 2014, and is projected to soar to $3.57 trillion in 2017, in the US alone. We believe that this is just a conservative figure.

We can avoid using drugs, defeat any viral attack and scaremongering, like the Zika virus, easily by knowing how to build our own comprehensive antiviral system.