9-11 and the United States’ Empire of Language and Ideas 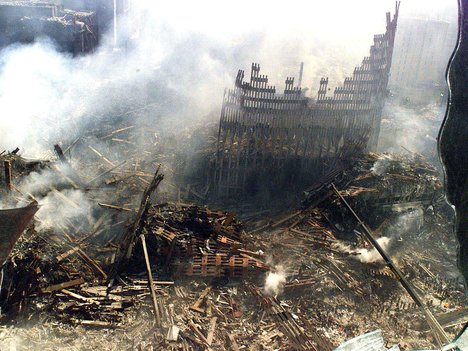 photo: US Coastguard / PA2 Tom Sperduto
Article by WorldNews.com Correspondent Dallas Darling. When it was reported that al-Qaeda was preparing to launch its first online newspaper, it reminded me of what Nicholas Ostler wrote in “Empires of the Word, A Language History of the World.” (Since words and phrases, along with their meanings, are usually defined and then redefined again by empires and their hegemonic discourses, I am leaving out the propagandistic adjective “propaganda” that the New York Times placed right before the word “online”, and the phrase “a move that could help the terror group recruit inside the U.S. and Europe” which followed the word “newspaper.”)

Ostler, who has spent most of his life researching languages, explains how it is language and the words people use that makes them human, even superhuman.(1) He believes that human thought is also unthinkable without the faculty of language, and once language and words are learned in a human community, it provides access to a vast array of knowledge and belief. Such assets empower communities when they think, when they listen, when they speak, read or write, and when they interact with others.(2) Ostler thinks “language communities,” especially the most powerful ones, are the real players in world history.(3)

Because of this, language not only binds communities together, but it can either guard or enlighten the mind. Still, languages and words provide meaning, especially through the context of a communities stories or narratives. On a cultural level, they provide people with a world-view and over time help mold perception. With technological revolutions in communication systems, like telephones and cell-phones, films and television, computing and the internet, and books and the print media, English-speaking America has projected its language, along with its culture and world-view, across the world to parts untouched even by the British Empire.(4)

Even more so, and thanks to the British Empire, the United States’ global entertainment industry and electronics network-backed by hundreds of overseas military installations and corporations, a majority of students in the world now learn to speak English. With eighty percent of four billion websites in existence using English, it is also the first language of the internet. Surely, U.S.-dominated word-meanings, values, perceptions, and neologisms-new words and phrases that lead to new ideas and new ways of speaking, dominate much of the world’s thinking, dialogue and debate.

Evidently, al-Qaeda has started producing “Inspire,” an online edition with animated graphics. Officials, (Once again, I am omitting “counterterrorism” and “terror analysts” that appears right before and after officials.), claim it will be run by al-Qaeda’s branch in Yemen, which was linked to the failed Christmas Day bombing of a U.S.-bound airliner. (The article did not recall Yemen’s years of ongoing civil and religious strife, U.S. attacks against alleged al-Qaeda villages leading to the deaths of hundreds of civilians and causing thousands of refugees, or President Obama’s orders to assassinate a U.S.-born citizen and cleric living in Yemen.)

The report claimed al-Qaeda’s new publication was clearly intended for the aspiring jihadist in the U.S. or United Kingdom who may be the next Fort Hood murderer or Times Square bomber. (This source, of course, was the sordid CIA. Notice too the highly charged emotional baggage to such wording.). The article concludes saying until now, al-Qaeda has relied on Arabic websites to carry its message, but it appears to be capitalizing on its recent success recruiting inside the U.S., and that by using the Internet the group has been able to attract Americans that have been radicalized. (I left out “propaganda on” before the word Internet, and “terrorist” that appeared before the word “group.” )

In the wake of the attacks on the Pentagon, World Trade Centers, and the potential attack against the White House or Congress (all symbols of U.S. militarism and hubris), President George Bush told Congress that the enemy was “heir to all the murderous ideologies of the twentieth century…following in the path of Fascism, and Nazism, and Totalitarianism” and such a terrible foe called for nothing less than a campaign to “rid this world of evil.”(5) He also widened the attacks to include the “Axis of Evil,” or Iran, Syria, and North Korea. The Bush Administration later used the attacks as an excuse to launch a series of preemptive wars too, that have now turned into lengthy and bloody occupations.

The problem with a single world-wide dominating language, like English, is that instead of unifying people, and depending on how it is used and who uses it, it can discourage and even sabotage creative attempts to think creatively and to act in certain ways for healing and reconciliation to occur. Depending on how words and phrases are used, or which ones are omitted, they can deprive the mind of other words and meanings, which are necessary for democracy and vital to security. Language and words, along with their meanings, can, and again it depends on how they are used and who uses them, can become totalitarian-like, even to the extent of either manipulating or controlling the recipients and users.

Aside from objecting to the use of militant retaliation and redemptive violence, both of which the United States Empire and al-Qaeda are guilty of, Inspire will at least challenge Americanization and its totalitarian nature. And just as the lion finally became the hunter, at least for one day, Inspire will continue to force the hunter to reflect on his own words and language and meanings, and how they might dehumanize and demonize people, even reducing them to commodities and abstract thoughts. Meanwhile, there are other animals in the jungle and other non-hunters who live at peace with each other. In the midst of lions and a superior hunter, they must write their own books and stories and narratives.