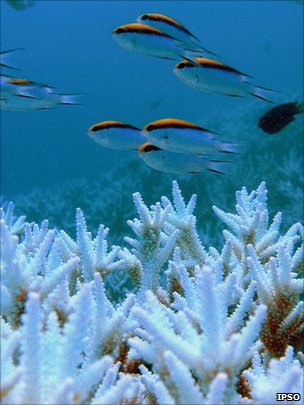 The oceans are in a worse state than previously suspected, according to an expert panel of scientists.

In a new report, they warn that ocean life is “at high risk of entering a phase of extinction of marine species unprecedented in human history”.

They conclude that issues such as over-fishing, pollution and climate change are acting together in ways that have not previously been recognised.

The impacts, they say, are already affecting humanity.

The panel was convened by the International Programme on the State of the Ocean (IPSO), and brought together experts from different disciplines, including coral reef ecologists, toxicologists, and fisheries scientists.

Its report will be formally released later this week.

“As we considered the cumulative effect of what humankind does to the oceans, the implications became far worse than we had individually realised.

“We’ve sat in one forum and spoken to each other about what we’re seeing, and we’ve ended up with a picture showing that almost right across the board we’re seeing changes that are happening faster than we’d thought, or in ways that we didn’t expect to see for hundreds of years.”

These “accelerated” changes include melting of the Greenland and Antarctic ice sheets, sea level rise, and release of methane trapped in the sea bed.

“The rate of change is vastly exceeding what we were expecting even a couple of years ago,” said Ove Hoegh-Guldberg, a coral specialist from the University of Queensland in Australia. 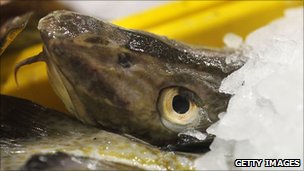 “So if you look at almost everything, whether it’s fisheries in temperate zones or coral reefs or Arctic sea ice, all of this is undergoing changes, but at a much faster rate than we had thought.”

But more worrying than this, the team noted, are the ways in which different issues act synergistically to increase threats to marine life.

Some pollutants, for example, stick to the surfaces of tiny plastic particles that are now found in the ocean bed.

This increases the amounts of these pollutants that are consumed by bottom-feeding fish.

Plastic particles also assist the transport of algae from place to place, increasing the occurrence of toxic algal blooms – which are also caused by the influx of nutrient-rich pollution from agricultural land.

In a wider sense, ocean acidification, warming, local pollution and overfishing are acting together to increase the threat to coral reefs – so much so that three-quarters of the world’s reefs are at risk of severe decline.

The challenges are vast; but unlike previous generations, we know what now needs to happen”

Life on Earth has gone through five “mass extinction events” caused by events such as asteroid impacts; and it is often said that humanity’s combined impact is causing a sixth such event.

The IPSO report concludes that it is too early to say definitively.

But the trends are such that it is likely to happen, they say – and far faster than any of the previous five.

“What we’re seeing at the moment is unprecedented in the fossil record – the environmental changes are much more rapid,” Professor Rogers told BBC News.

“We’ve still got most of the world’s biodiversity, but the actual rate of extinction is much higher [than in past events] – and what we face is certainly a globally significant extinction event.”

The report also notes that previous mass extinction events have been associated with trends being observed now – disturbances of the carbon cycle, and acidification and hypoxia (depletion of oxygen) of seawater.

Levels of CO2 being absorbed by the oceans are already far greater than during the great extinction of marine species 55 million years ago (during the Paleocene-Eocene Thermal Maximum), it concludes.

The report’s conclusions will be presented at UN headquarters in New York this week, when government delegates begin discussions on reforming governance of the oceans. 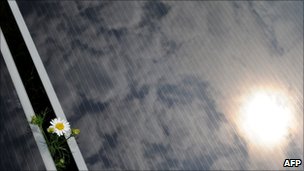 In the long run, greenhouse gas emissions must be cut to conserve ocean life, the report concludes

Carbon dioxide levels are now so high, it says, that ways of pulling the gas out of the atmosphere need to be researched urgently – but not using techniques, such as iron fertilisation, that lead to more CO2 entering the oceans.

“We have to bring down CO2 emissions to zero within about 20 years,” Professor Hoegh-Guldberg told BBC News.

“If we don’t do that, we’re going to see steady acidification of the seas, heat events that are wiping out things like kelp forests and coral reefs, and we’ll see a very different ocean.”

Another of the report’s authors, Dan Laffoley, marine chair of the World Commission on Protected Areas and an adviser to the International Union for the Conservation of Nature (IUCN), admitted the challenges were vast.

“But unlike previous generations, we know what now needs to happen,” he said.

“The time to protect the blue heart of our planet is now.”