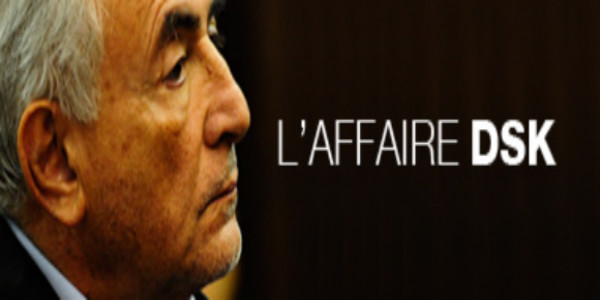 A Photo Tour of DSK’s New Luxury Townhouse Below

PARIS  — Anne Sinclair is sacrificing millions of her family’s fortune on her husband’s bail and house arrest. Dominique Strauss-Kahn declared his love for his wife in a public letter, and blew her a kiss across a New York courtroom where he was charged with trying to rape a hotel maid.

As the trial of IMF chief Dominique Strauss-Kahn unfolds before the world’s eyes, the French are likely to focus their attention on his celebrity wife Anne Sinclair (pictured), who already endured a previous sex scandal in 2008.
By Joseph BAMAT (text)

Just a few hours after Dominique Strauss-Kahn, the International Monetary Fund’s managing director, was slapped with criminal sex charges and handcuffed on Saturday, his wife Anne Sinclair said she didn’t believe “for a single second” that her husband was guilty. In a statement to French journalists she said she had “no doubt that his innocence will be proven.” On Monday, Sinclair left Paris on a plane headed to New York to be close to her scandal-hit spouse.

The words in support of Strauss-Kahn sounded familiar to the French. Two years ago, when Strauss-Kahn was embroiled in another sex scandal – albeit minor in comparison – the IMF chief found a loyal and forgiving wife by his side.

However, for the French, Sinclair’s words are not just those of an ordinary wife who sticks by her man.

Anne Sinclair, 62, is a household name in France. From 1984 to 1997 she hosted TF1 channel’s “7 sur 7”, one of the most successful political talk-shows in French television history. She is remembered for interviewing the emblematic political figures and international celebrities of the day. Her guests included French president François Mitterrand, US president Bill Clinton, Soviet president Mikhail Gorbachev, as well as Madonna, Paul McCartney and Mother Teresa.

While Sinclair may not be well-known internationally, in France she is part of a select pantheon of influential public figures that comprise politicians, intellectuals and media personalities. While she no longer features prominently on television screens, her blog about life and politics in the US remains one of the most read in France.

In recent months, French journalists and observers combed her website daily for any clues on whether her husband, who is also a prominent member of France’s Socialist Party, would join the much-anticipated 2012 presidential election race. Now, as the world tunes into Strauss-Kahn’s impending trial, French eyes will inevitable focus on Sinclair for a hint of frustration with her husband, or proof of his innocence.

Dominique Strauss-Kahn is Sinclair’s second husband, while she is his third wife. By her own account, Sinclair quit her high-profile television programme in 1997 to avoid any conflict of interest when he was named France’s finance minister. In a similar move, Sinclair dropped her professional projects in 2007 to follow Strauss-Kahn to Washington, where he would direct the IMF.

Less than a year later, in October 2008, Strauss-Kahn was discovered to have had an affair with Hungarian economist Piroska Nagy, and the IMF began an internal investigation to find out if its top man had abused his power. Sinclair reacted by saying she would “serenely” wait for the results of the IMF probe. She added however, that she and Strauss-Kahn had “already turned the chapter” on the extra-marital affair and confessed to loving him “as if it were the first day.”

The IMF eventually cleared Strauss-Kahn of any wrongdoing, finding only that he had shown “poor judgment”. Sinclair, who had once drawn comparisons to American TV and radio host Larry King for her important interviews, was likened to Hillary Clinton in the wake of the affair. Both women decided to stand by their politician husbands after very public scandals.

Sinclair’s unrepentant devotion to Strauss-Kahn in the face of the 2008 IMF affair has perplexed many in France, but her notoriety has remained mostly untouched. The journalist won top ratings and reporting awards before she met her husband, and even from Washington, continued to drive public opinion in France.

Sinclair currently works as a freelance journalist for the private French TV channel Canal+, covering American politics. She also wrote about the 2008 US presidential campaign for the French weekly Le Journal du Dimanche, and according to her blog, is currently writing a book on American political life.

Sinclair’s loyalty to her husband has been proven in the past, but it now faces an unprecedented challenge. The French are known to be tolerant of their leaders’ private lives, but the gravity of the charges Strauss-Kahn faces in New York has left them stunned.

In the following weeks and months, as Strauss-Kahn’s lawyers plead his innocence, not just under the gaze of the courtroom but the international media, Anne Sinclair’s image and reputation among the French will also hang in the balance.

From The Rikers Island To LUXE Diggs

To the delight of the city’s tabloids, Dominique Strauss-Kahn has moved from his temporary apartment at 71 Broadway to a four-bedroom, 6,800 square-foot, $50,000-a-month townhouse in TriBeCa to sit out his house arrest while the attempted rape case against him moves along. Also, The New York Times reports that the Manhattan District Attorney’s Office added two senior prosecutors to the legal team prosecuting the case.

Both tabloids got in some classic “perv” puns (the Post: “Chez Perv,” the Daily News: “Just Pervect”) in their headlines announcing Strauss-Kahn’s new digs. And some digs they are. The property has been on offer from Town Real Estate (which supplied the photos) for an asking price of nearly $14 million to buy or $50,000 per month to rent. In addition to its four bedrooms and four-and-a-half bathrooms it has a movie theater, a steam bath, a jet tub, a terrace with “Japanese paper glass wall and wolf natural gas grill,” wide-plank flooring is made of antique French oak, and top-of-the-line kitchen appliances. No word on a bowling alley, but we’ll keep you posted. Not bad for someone who one week ago faced the possibility of spending the next few months at Rikers Island. To top it all off, the Daily News reported Strauss-Kahn and his wife, Anne Sinclaire, enjoyed a $242.79 steak dinner from nearby Landmarc for dinner last night.

And of course, the movie theater: