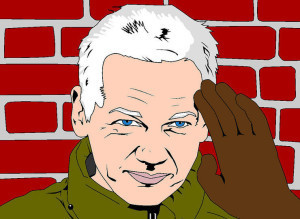 New York Times Executive Editor Bill Keller and Guardian Editor in Chief Alan Rusbridger say they will stand with WikiLeaks founder Julian Assange if prosecution is brought against him.

At a Thursday night panel, hosted by Columbia University Graduate School of Journalism on the future of WikiLeaks and its effects on journalism, Jack Goldsmith, a prominent Harvard law professor and former assistant attorney general, said there is an “enormous amount of political pressure” to bring charges against Assange by the U.S. Department of Justice. At first, Goldsmith expressed the difficulty of extraditing Assange to the U.S. He then noted the many legal hurdles the department faces because, in the legal sense, Assange would be characterized as a journalist and defended as such.

“My sense is there is a lot of political pressure from the top, certainly from Capitol Hill,” Goldsmith said.

But despite the department’s long restraint when it comes to going after journalists and issues involving the First Amendment, he concluded that some kind of prosecution will be brought about. “But I also don’t think it will be successful,” he said.

Emily Bell, the moderator and director of the Tow Center at the journalism school, then turned to the Times and Guardian editors, both of whom worked with Assange and WikiLeaks on the Iraq War documents and the leak of U.S. State Department cables, and posed a question about the possibility of Assange’s prosecution.

Though the Guardian‘s relationship with Assange has soured somewhat, Rusbridger — almost without hesitation — said if Assange was brought to court, he would be “completely side-by-side with him in terms of defending him with respect to what he’s done.” He said Assange deserves the same protections given to journalists when it comes to publication of secret government documents.

Keller was initially a bit more reserved in his response. “I think the Times‘ lawyers would prefer I not declare what I’d do in a court of law,” he said. “It’s very hard to conceive of a prosecution of Julian Assange that wouldn’t stretch the law in a way that would be applicable to us.”

“Whatever anyone thinks of Julian Assange, certainly American journalists, and other journalists, should feel a sense of alarm at any legal action that tends to punish Assange for doing essentially what journalists do. That is to say, any use of the law to criminalize the publication of secrets,” Keller said. “I think we do stand alongside him.”

Both of the editors also discussed the possibility of building their own WikiLeaks-like platform that would enable readers to upload large amounts of data anonymously. Keller said the Times is still considering it, but there are a lot of challenges and difficulty in vetting such material. Meanwhile, Rusbridger said they are having similar conversations at their paper about how to make it work.

“We haven’t decided whether we would ahead with our own WikiLeaks, but technically it’s not that difficult,” Keller said.