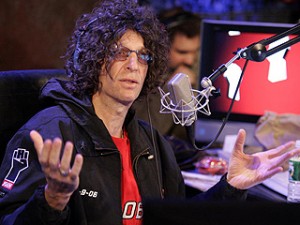 If you’re not a regular listener to Sirius XM radio host Howard Stern, you probably wouldn’t think of him as the patriotic type.

However, in an interview on Tuesday’s airing of CNN’s “Piers Morgan Tonight,” Stern revealed his affection for America, and surprisingly — for politicians.

“You know, I’m not one of these people gets on the radio and knocks every senator,” Stern said. “I happen to think there are a lot of intelligent senators out there. I hear them speak and I’m proud to be from this country and I’m proud of our politicians. There’s a lot of good people out there. And I would have run for office. And I’ll tell you why. Because I’m not serious enough and I’m not serious enough about helping people.”

Stern explained politicians should take their jobs seriously as service men and women are overseas working with their lives in danger.

“I think, listen, when you got guys over in Afghanistan and Iraq, you need some serious people who are going to – I don’t want to see guys on endless vacations,” he said. “I want to see guys working. I want to see politicians taking the job seriously.”

“Bill Clinton was a great president,” Stern said. “Why was he a great president? Because he was into the job. This guy was on the job all the time. He loved it. He lived it. He breathed it. And he — and before he got you in a war, he made sure he thought things through. I was a big backer of Hillary Clinton. I think she would have been the same way.”


But he credited the freedoms in the United States for his success, particularly freedom of speech.

“I think America is the greatest country in the world. And I don’t just say that to, you know, to

to — I love this country,” he continued. “I hate leaving this country. I just went to that Turks and Caicos. I want to go hang myself. They have so many ants over there, I was going to throw up. I get in my room. I’m — I’m deluged with ants. I was paying a couple of grand a day. I love Americans. I love America. I love our freedom. And nowhere could a guy like me, a schlub like me have success with — where would I get this freedom of speech? They don’t allow this anywhere.”

However, earlier in the show, Stern didn’t speak as highly of NBC “Tonight Show” host Jay Leno – a feud that goes back a few years.

“Jay is insane and Jay is a crook,” Stern said. “And the whole world knows exactly what he’s up to. He steals a tremendous amount of material. He’s not fit to scrub David Letterman’s feet. Yes, I don’t know why he’s beaten David Letterman in the ratings. It’s beyond my comprehension. America must be filled with morons who at night lay in bed — the ones who are watching him, they must be in a coma.”

Stern explained that some of the ill-will he feels toward Leno stems from how he handled his return to late night talk in 2009 – by unseating Conan O’Brien from the same time slot.

It isn’t just business according to Stern. It’s a personal animosity between he and Leno.

“I don’t like Jay personally,” he said “Jay was one of the greatest stand-up comics, in my opinion, when he was younger. But I do not like how he has behaved with me personally. I’ve done his show many times in the past. I won’t do it again. And you know what? I’ve let go of all of that, even though I’m ranting and raving like a lunatic for your show.”