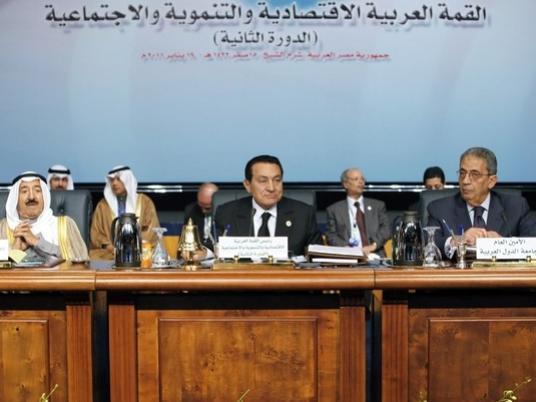 The secretary general of the Arab League on Wednesday linked the upheaval in Tunisia to deteriorating economic conditions throughout the Arab world, warning Middle East leaders that their people’s anger has reached unprecedented heights.

In impassioned remarks, Amr Moussa told an Arab economic summit in Egypt that “the Arab soul is broken by poverty, unemployment and general recession.”

“This is in the mind of all of us,” Moussa said in his opening address to the 20 Arab leaders and other representatives of Arab League members gathered in the Red Sea resort of Sharm el-Sheikh.

Weeks of protests fueled by joblessness and other economic woes in Tunisia forced its president to flee the country Friday after 23 years of iron-fisted rule.

The unrest has helped inspire similar protests around the Arab world and calls for political change, though activists face the reality of vast security forces heavily vested in the status quo backing hard-line regimes ready to crack down on dissent.

“The Tunisian revolution is not far from us,” Moussa, who has not ruled out the possibility that he might run for Egyptian presidency, warned. “The Arab citizen entered an unprecedented state of anger and frustration.” He called for an Arab renaissance to lift people from their frustration.

The meeting in Egypt had been intended as a platform to discuss trade, business and investment, but was overshadowed by the events in Tunisia and their reverberation around the region.

Mindful of those events, Arab leaders at the summit committed to a proposed US$2 billion program to boost faltering economies that have propelled crowds into the streets to protest high unemployment, rising prices and rampant corruption.

Thousands have demonstrated in Jordan, Egypt, Oman, Libya and Yemen recently over the economic situation, some explicitly in solidarity with the Tunisians.

The idea of the fund was first suggested by Kuwait during the economic summit in the Gulf emirate in 2009 but has been slow to get off the ground like many Arab League initiatives requiring members to pledge money.

Arab diplomats said oil-rich Saudi Arabia and Kuwait have promised to pay US$500 million each and, after the economic-related unrest in Tunisia, additional pledges are pouring in.

The 82-year-old president, who is widely believed that he will run for a sixth term in September’s presidential election, also said investment in the Arab youth will bring future rewards.

“The most precious of all our resources and wealth,” Mubarak called them. “The issue of employment will remain at the top of all challenges.”

Saudi commentator Turki al-Dakhail, writing in the al-Watan daily, called for the Arab regimes to end the “starvation” of their nations.

“The systematic starvation against people in Tunisia led to an uprising and anger of the people,” al-Dakhail wrote. “Starving your dog, will force him to eat you up.”