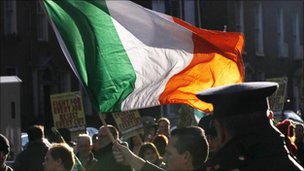 Among the spending cuts and tax rises are a reduction in the minimum wage, a new property tax and thousands of public sector job cuts.

The government is also negotiating a bail-out package with the EU and IMF, expected to be worth about 85bn euros.

It said it wanted to protect health and education spending as far as it could.

The government also said it would maintain the country’s low level of corporation tax at 12.5%. Many commentators in the run up to the plan said raising this rate could be an easy way for the state to increase revenues.

Finance minister Brian Lenihan said the government would also introduce a property tax, called a site value tax, which will cost most homeowners up to 200 euros a year by 2014.

He added that the spending cuts would be concentrated in areas of highest spending – pay, pensions and social welfare.

“It is important to understand these are key drivers to expenditure and will be curtailed,” he told a press conference.

The plan will cost Irish taxpayers 20 euros a week, he said.

In total, the spending cuts will amount to 10bn euros while tax rises will bring in a further 5bn euros.

As if the Irish haven’t sacrificed enough, the Irish government has announced that it will create a new four-year ‘Solidarity Bond’ so that the Irish people can lend to their government”

The 15bn euros equates to about 9% of the country’s total economic output, which is similar in percentage terms to the 8% budget cuts the UK coalition government has recently announced.

However, the Irish government has already implemented 15bn euros of cuts since the onset of the global financial crisis.

Taoiseach Brian Cowen said he hoped the plan would “bring certainty to our people to make sure they have hope for the future”.

“We can and will pull through as we have in the past. We love our country and we want to make sure our children have a future here too.”

He added that the plan was also “about growing the economy and identifying those sectors of the economy that are proving to be successful”.

There have been criticisms that the government is focusing too much on spending cuts and not enough on stimulating economic growth.

However, Mr Cowen said the rationale behind the recovery plan was job creation. He pledged to reduce unemployment below 10% by 2014.

But Mr Lenihan said drastic cuts were needed to reduce the budget deficit to 9% next year, from 11.7% this year.

Much of the content of the plan had been flagged up before the announcement, but analysts said more popular unrest was inevitable, following recent protests at the government’s handling of the economy.

“It looks vicious, predictably vicious. There is going to be enormous social uprising against this one, undeniably,” said David Keeble at Credit Agricole.

Opposition parties have also been vocal in their criticism of the government, particularly its denial last week that it would need to seek financial assistance from the EU and IMF.

There have also been calls for an immediate general election in protest at the government’s handling of the economy.

Mr Cowen refused to answer questions about an election, which is expected early next year.

Instead he stressed again the need for parliament to pass the budget, which incorporates the austerity measures, on 7 December.

“Then, whenever we have that completed… the people can decide who they want to govern the country,” he said.

The government’s tenuous position is undermining the credibility of the recovery plan and contributing to instability in financial markets, analysts say.

“I’m not sure [the plan] is really going to convince markets,” said Ben May at Capital Economics.

“The whole political uncertainty at the moment means that people aren’t 100% sure that they will even be able to pass the budget. Even if they do, there’s probably going to be a new government early next year.”