The first time Essam Al Erian, went to jail, he was 27. Last Sunday, he left prison for the eighth time at the age of 57.

The medical doctor’s crime for each incarceration was belonging to the Muslim Botherhood, Egypt’s most influential and best-organized Islamist opposition movement and long feared by President Hosni Mubarak, Israel and the United States.

Egypt’s courts have repeatedly rebuffed the Brotherhood’s requests for recognition as a party on the grounds that the constitution bans parties based on religion.

Now the world could not look more different to the past three decades when Brotherhood members were repressed, arrested, tried in military courts and shunned by the Egyptian government.

After the last tumultuous days of popular revolt against Mubarak, it is now the government that is seeking out the Muslim Brotherhood to discuss Egypt’ future.

Mubarak’s Vice President Omar Suleiman met opposition groups on Sunday in talks joined for the first time by the Brotherhood.

The once outlawed group is finally well-placed to play a prominent role as Mubarak’s government struggles to survive after 30 years in power.

“I’ve been in and out since 1981,” said Erian, a leading figure in the Brotherhood. “I have seen all forms of torture. I have been suspended by ropes, beaten, electrocuted and left outside in the cold for hours. I must say the treatment improved along the years and because of my age.”

“All this only increased my resolve,”said Erian. “The Mubarak regime exists to monopolize not only power but wealth.”

Erian was among 34 Brotherhood members who walked out of Wadi Natroun prison last Sunday after relatives stormed the jail, overcame the guards and freed the prisoners during protests which spilled out of control across the country.

Erian, rounded up last month during preparations for the protests, went straight from jail to Tahrir Square, the epicentre of anti-Mubarak protests.

Power through the ballot?

His group has been active in the uprising. But decades of repression have taught the Brotherhood to take a backseat and it is anxious to maintain the impression that the Islamists are one part of the wider protest movement.

“We’re not seeking power but our participation is a duty under a democratic and independent process. Our goal is to make sure the identity of society is Islamic,” Erian said.

“It is the right of everybody to compete and if people like us then where is the problem? We have sacrificed a lot…It is our right to win a majority as in any country, like Turkey.”

The popular uprising against Mubarak sent off alarm bells in Israel and the United States. They fear the Islamist movement might end up in power through the ballot and would eventually achieve its ultimate aim of implementing Sharia law in Egypt.

The Muslim Brotherhood is certainly hostile to Israel and the United States’s policy in the region. It has historic links with the Palestinian Islamist movement Hamas and shares its belief in armed struggle against Israel.

But unlike the groups that fought Mubarak’s rule in the 1990s the Brotherhood has an overwhelmingly lay leadership of professionals with modern educations – engineers, doctors, lawyers, academics and teachers. The core membership is middle-class or lower middle-class.

The government’s willingness to talk to the Brotherhood is a political shift with historic proportions and testimony to the perseverance of a movement seen by analysts as playing a long waiting-game.

Western governments have until now avoided direct contacts with the Brotherhood, for fear of angering the government. But they have not been able to brand the group, which renounced violence in the 1950s, a “terrorist” organisation.

In such a disfigured political environment it is impossible to judge the real popularity of the Brotherhood. In parliamentary elections in 2005, the first stages of which were relatively fair, the Brotherhood won 88 of the 165 seats they contested. In the latter stages police stopped people voting.

The crackdown failed to dent the movement’s drive to expand its popular base through charity and social work.

Brotherhood ideology steadily seeped into schools, households, the media, bookshops and even clothing shops. Much of this Islamic resurgence stems from social dislocation, economic hardship and political frustration.

Arab defeat in the 1967 war with Israel, the political vacuum opened after the collapse of President Gamal Abdel Nasser’s secularist pan-Arabism in the 1970s, and a sudden peace with Israel after years of enmity gave impetus to Islam as a competing and substitute ideology.

But for the Islamists the issue goes beyond the immediate future to a political landscape in which they believe they are steadily dominating by seeding the terrain with people of faith.

Many Brotherhood leaders, most of whom have been jailed for years, believe that the future is for Islam as long as they are patient, determined and resolute.

They are confident that Islam and Sharia (Islamic law) will eventually rule and they are working to achieve that goal.

The Brotherhood, founded in 1928, wants democracy, except governed by the main principles of the Sharia. It had for long-demanded greater political freedom, freedom of expression, free and fair elections where people of all trends are represented.

Supporters also dominate most of Egypt’s main professional syndicates, have strong presence at universities and run thousands of charities providing healthcare and education.

But perhaps the most novel element in its manifesto is that it advocates “ijtihad”, innovative interpretation of the Koran to bring Islamic law in tune with the demands of changing times. 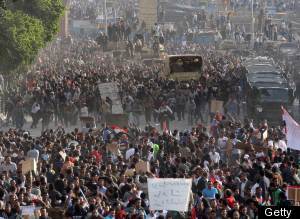 Liberals involved in the uprising are also worried about the Brotherhood’s ambitions – that they will capitalise on an uprising, launched by a mixture of political and secular forces, to emerge on top as happened in Iran during the 1979 Revolution.

Analysts say the dynamics of Egyptian politics have changed from the 1990s when the Brotherhood versus the government was the only game in town.

The January 25 uprising has revealed a diversity in liberal movements which could see the creation of new political parties.

“The situation cannot be compared to the past. I don’t think the experience can be repeated or compared with Iran in the same way but of course there are fears,” Diaa Rashwan, an expert at Al Ahram Centre for Political and Strategic Studies, said.

“Nobody can predict the future but the uprising was against a dark regime. We could have something better, but we could also have chaos as something may happen to spoil and sabotage this uprising”.