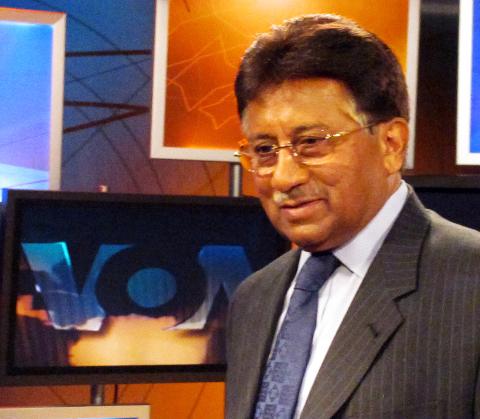 Former Pakistani president Pervez Musharraf discounts allegations that his country’s powerful intelligence agency has been backing the Taliban. But he also says the Inter-Services Intelligence directorate, or ISI, must counter what he says are Indian plots against Pakistan hatched in Afghanistan.

In an interview at VOA in Washington, Mr. Musharraf deflected charges that the ISI is backing the Taliban. “ISI has been attacked by the Taliban umpteen number of times.  Their offices have been attacked, bombed, suicide bomb attacks, they have had about 300 operatives killed.  Now on the one side, the Taliban are attacking and killing them. On the other, we think they are supporting Taliban. There’s a mismatch somewhere.  So we need to analyze what is really happening,” he said.

Mr. Musharraf said he does not subscribe to the concept of strategic depth, advanced by some Pakistani military thinkers, that looks to Afghanistan as a place to blunt Indian influence in the region.  But the former general and ex-president went on to accuse India of fomenting terrorist actions against Pakistan out of the Indian embassy in Kabul and consulates in Kandahar and Jalalabad.

“ISI is expected to protect Pakistan’s interests. That doesn’t mean that they are doing this through Taliban. I don’t even know what they are doing against (the threat), (and) how they are doing it. But the United States and our allies in Afghanistan must be conscious of the sensitivity of Pakistan, and they must help Pakistan in countering anything that India is doing (to Pakistan) by stabbing us in the back,” he said.

India has accused Pakistan of backing groups like Lashkar-e-Taiba, a Kashmiri armed organization which intelligence agencies have linked to the Mumbai terrorist attack two years ago that killed nearly 200 people. But Mr. Musharraf denies any government link to it or other militant groups.

As an army general, Mr. Musharraf took power in a bloodless coup in 1999.  He stayed in office until 2008 when, faced with the threat of impeachment, he resigned.  Now he seeks to re-enter politics with an eye to running again in 2013.  He is in the United States on what he says is a combination lecture tour and political campaign among Pakistani émigrés.

During his tenure, Mr. Musharraf was sharply criticized in the United States and other countries for his attempts to strike peace deals with pro-Taliban tribal leaders in the Afghan border areas. He still defends the deals, all of which fell apart, as part of a strategy to woo ethnic Pashtuns away from the Taliban, and says the U.S. is now trying the same thing.

“Are you not talking of now dealing with moderate Taliban, or the Taliban themselves?  When I was doing this in 2002 or ’03, that I was trying to wean away Pashtuns, everyone thought I was double-dealing.  Are you double dealing now that you want to talk to the Taliban?  Wasn’t I better off that seven years back I was doing exactly what you are trying to do now?,” he said.

Asked if any talks can reach a political accommodation in Afghanistan without Pakistan’s input, Mr. Musharraf said it would be difficult – and that the ISI could play a positive role. “ISI knows the environment, ISI knows the people, ISI understands the environment, much more than anyone else. So therefore ISI can contribute towards anything that we want to do,” he said.

The former president dismissed the notion that the Pakistan army has not been sufficiently aggressive in trying to clear out al-Qaida and Taliban sanctuaries in Pakistan’s tribal areas.  He also accused the U.S. of failing to trust the Pakistan Army and the ISI.