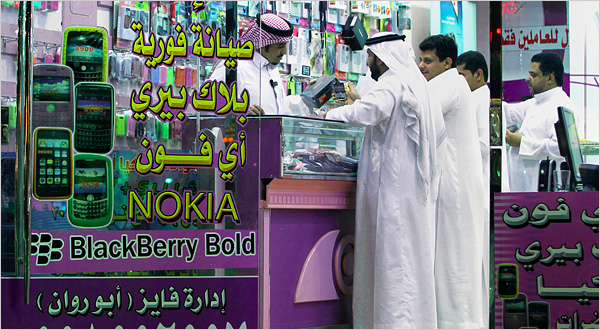 The Saudi government backed away Tuesday from a threat to shut down the BlackBerry corporate messenger service in the country, citing progress in talks with operators and the maker of the device, Research In Motion, over the ability to monitor encrypted messages for national security reasons.

In a statement released through the state-run Saudi news agency, the Communications and Information Telecommunications Commission said it had obtained unspecified commitments from operators and R.I.M. that would aid in the country’s plan to monitor encrypted traffic on BlackBerry smartphones.

“In light of the positive developments in completing part of the regulatory requirements from the service providers, the regulatory authority has decided to allow the continuation of the BlackBerry Messenger services,” the ministry said.

R.I.M. and the three mobile operators in Saudi Arabia — Saudi Telecommunications; Mobily, owned by Etihad Etisalat of Abu Dhabi; and Zain KSA of Kuwait — had faced a deadline of midnight Monday to comply with the regulator’s request or have a service used by 500,000 people in Saudi Arabia curtailed.

The regulator said it would continue working with the operators and R.I.M. to fulfill other requirements, but it did not elaborate. R.I.M., which is based in Canada, declined through a spokeswoman in London to comment.

Governments in Saudi Arabia, the United Arab Emirates and India have recently expressed concern about R.I.M.’s reluctance to provide them with access to its encrypted e-mail traffic — an information flow that R.I.M. itself says it has no way of decoding.

The governments, which are fighting domestic terrorism, have accused R.I.M. of using a double standard by denying them access that it routinely grants to governments in North America and Europe.

The United Arab Emirates has threatened to curtail BlackBerry’s corporate service in October unless an agreement is reached.

R.I.M. executives have denied that the company has cut any deals or would compromise the security of its system. A former BlackBerry executive, who did not want to be identified because the person was not authorized to speak for the company, said last week that R.I.M. had never disclosed encrypted contents of communications to any government in the Middle East or elsewhere.

Nick Jones, an analyst in London with Gartner, said it was more likely that R.I.M. had provided legal intercepts of its encrypted information to certain governments but had not helped the authorities to decrypt the information.

“Most governments reserve the right to access communications,” Mr. Jones said. “But it would be difficult for R.I.M. to decrypt and disclose private communications and then lie about it, because security is everything to R.I.M.”

The situation has brought unwelcome public scrutiny to R.I.M., the world’s second-largest maker of smartphones, after Nokia. The company’s success in corporate e-mail is largely built on the security features of its delivery system. The traffic is encrypted and travels primarily through R.I.M.’s own data centers in Canada, Britain and around the world.

European governments generally require operators to provide them with “legal intercepts” as a condition for doing business, said Paul Conway, the director of compliance operations at ComReg, the Irish telecommunications regulator.

But the requirement does not oblige an operator to decrypt confidential information, said Mr. Conway, who is an alternate member of the board that oversees the European Network and Information Security Agency, a group based in Greece that advises the European Commission.

“I think such a requirement would actually violate European data privacy law,” Mr. Conway said, by disclosing the communications of E.U. citizens.

Alberto Pamias, a managing partner in charge of Middle East business at Delta Partners, a telecommunications advisory and investment firm based in Dubai, said he thought the negotiations between R.I.M. and Saudi Arabia could produce a model for the region, averting the widespread shutoff of BlackBerry services.“Saudi has been very strict with its demands for compliance of legal interception,” Mr. Pamias said. “Nothing makes us believe that other regulators in the region will be stricter than the Kingdom of Saudi Arabia.”