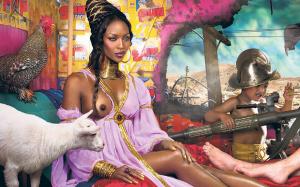 Supermodel Naomi Campbell testified at the war crimes trial today of former Liberian strongman Charles Taylor that she accepted a gift of uncut, dirty stones — possible “blood diamonds” — after attending a 1997 dinner with the dictator at Nelson Mandela’s home in South Africa.

But Campbell stopped short of calling the stones diamonds, and said two strangers — not Taylor — delivered them to her. Prosecutors subpoenaed Campbell to testify against the former Liberian president, and had hoped she would directly link Taylor to contraband.

He’s accused of receiving diamonds from rebels in neighboring Sierra Leone, and using them to buy weapons on a 1997 trip to South Africa. Taylor is on trial for crimes against humanity during the 1992-2002 civil war in Sierra Leone, during which up to a quarter million people died. Taylor calls the allegations “nonsense.”

“Blood diamonds” are stones mined in war zones and linked to corruption, killings and conflict. About 75 countries have signed onto a voluntary pact to ban their trade. Prosecutors hoped that Campbell’s testimony might prove that such diamonds were in Taylor’s possession, and that he gave some of them to the British supermodel as a gift.

Campbell’s testimony today at the Special Court for Sierra Leone, near The Hague in the Netherlands, detailed what happened after she attended the 1997 dinner at Mandela’s home. She said she was awoken in the middle of the night by two strangers knocking on her door.

“When I was sleeping, I heard a knock on the door,” Campbell said in testimony carried by several news agencies. “Two men gave me a pouch and said ‘a gift to you.’ I opened it the following morning. I saw a few stones; they were very small dirty-looking stones.”

Campbell suggested it wasn’t unusual for her to be presented with such gifts, and that she didn’t know who had sent her the stones, which she refrained from calling diamonds.

American actress Mia Farrow was also visiting South Africa at the time, and Campbell testified today that it was either Farrow or her former modeling agent, Carole White, who told her at breakfast the next morning that the uncut stones were probably a gift from Taylor. The model said she gave them to a friend who works for a children’s charity in South Africa.

Farrow and White are scheduled to testify next week.

Campbell, 40, arrived at the courthouse fashionably late this morning, wearing a conservative cream-colored suit, with her hair pulled back in a bun. She had fought against testifying, and told a prosecutor during questioning today: “I didn’t really want to be here. … I just want to get this over with and get on with my life.”

No stranger to a courtroom, the supermodel herself has a criminal record. In 2008, she pleaded guilty to cursing, kicking and spitting at police at London’s Heathrow Airport because of lost luggage, and was sentenced to 200 hours of community service. A year earlier, she served a week of community service in the U.S. after pleading guilty to assault for throwing a mobile phone at her maid over a lost pair of jeans. And in 2000, she pleaded guilty in Toronto to beating up another assistant who also said she’d been struck on the head with a phone. 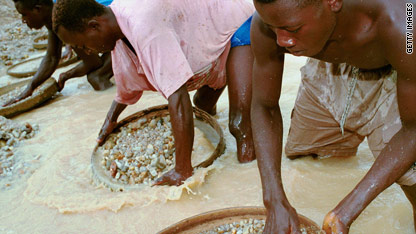 Before ruling the west African country of Liberia from 1997 to 2003, Taylor headed the National Patriotic Front of Liberia, an armed group that allegedly fought to control neighboring Sierra Leone’s profitable diamond mines and terrorized civilians there during a bloody 10-year civil war. He has pleaded not guilty to 11 counts of murder, sexual slavery and enlisting child soldiers.

The brutality in Sierra Leone was depicted in the 2006 movie “Blood Diamond,” starring Leonardo DiCaprio and Jennifer Connelly.

Taylor, 62, was arrested in Nigeria and transferred in 2006 to The Hague, where the U.N. and Sierra Leone set up a court to prosecute war crimes during the conflict there. Eight other defendants have already been sentenced to jail terms. The court is due to close down after Taylor’s trial.