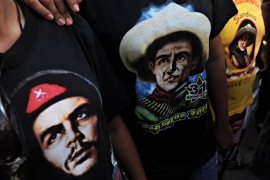 Nicaragua — Nicaragua’s exponential export growth to Venezuela has its government singing the praises of Hugo Chavez’s socialist alliance. But, economists warn, once the wonderment ceases, Nicaragua could be left with a nasty hangover.

Since Nicaraguan President Daniel Ortega returned to power three and a half years ago, exports to Venezuela have jumped by nearly 6,000 percent, from $2 million in 2006 to $119 million in 2009 — an amount that is projected to double again this year. Venezuela is now Nicaragua’s second-biggest export market behind the United States — a remarkably fast achievement considering three years ago Venezuela didn’t even rank in Nicaragua’s top 25.

Though Nicaragua has always relied heavily on Venezuelan oil imports, it has only recently started to reciprocate by exporting beans, beef and cattle.

Ortega claims the numbers offer convincing proof that the “fair-trade” economic model of the Bolivarian Alliance for the Americas is redefining international relations in a world dominated by “savage capitalism.” The alliance, known as ALBA, is a a leftist cooperation agreement between Venezuela, Cuba, Nicaragua, Ecuador, Bolivia and three small Caribbean nations.

Originally formed as a socialist alternative to U.S.-led free-trade advances in Latin America, ALBA has evolved into a Venezuelan-bankrolled effort to promote political, commercial and cultural unity among likeminded countries in Latin America. But five years after its inception, critics argue ALBA is little more than a clubhouse of impoverished nations dependent on Venezuelan oil and a political platform for Chavez’ arbitrary style of leadership.

“Venezuela is a market that is going to continue to grow, we’re sure of that,” Ortega said at a political rally earlier this month. “That’s the will of our brothers in ALBA, our presidents and our people — to continue strengthening this process.”

But economists and business leaders worry that Nicaragua and Venezuela are building an economic house of cards on a wobbly foundation of political rhetoric. Any tremors in either of these two politically seismic countries could have a devastating effect on ALBA and the continuation of bilateral trade, analysts warn.

“This is political trade; it’s not sustainable in any way,” said Jose Guerra, a former top official with Venezuela’s Central Bank and head of the economics department at the University of Central Venezuela. Guerra said the commercial relation between the oil giant and this impoverished Central American nation is “ideologically convenient, but nothing else.” He warned that any change in government in Nicaragua or Venezuela will nix the deal.

Other factors, such as Venezuela’s deepening economic crisis, could also affect the future of Nicaragua’s role as an emerging trade partner. If Chavez feels pressure to normalize relations with neighboring Colombia by lifting the crippling trade embargo that he imposed last year, Nicaragua could find its substitute role terminated.

That’s why Nicaragua’s private sector is asking Ortega to formalize the sweetheart commercial relations by signing a free-trade agreement with Venezuela now before the bubble bursts. By establishing clear rules to the game now, Nicaragua’s private sector hopes trade relations between the two countries can evolve beyond a backroom handshake and backslap between Chavez and Ortega.

Arteaga, president of the Nicaraguan-American Chamber of Commerce, said all trade is good, but it must be put in writing with a trade agreement similar to the one Central America signed with the United States (CAFTA). He said a trade agreement would help depoliticize and depersonalize trade relations with Venezuela, assuring that they’ll continue beyond the next change in government.

Arteaga said the fact that Nicaragua’s exports to the United States continue to grow under Ortega, an outspoken critic of the U.S. government and former Cold War foe from the 1980s, is a testament to the importance of institutionalizing trade.

Unfortunately, Arteaga added, the Sandinista government has not responded to calls for a proper free-trade agreement and Ortega and Chavez continue to treat ALBA as if it were their own personal property. Using a combination of state companies and private ALBA business holdings, Ortega and Chavez are acting like middlemen, buying directly from small Nicaraguan producers and exporting to Venezuela under an arrangement that critics claim confuses the roles of state and party.

But without clear terms of trade, Nicaragua’s traditional private sector is having a hard time getting in on the action.

During Ortega’s first year in office in 2007, Nicaragua’s export-promotion agency NicaExport tried to organize a private-sector trade mission to Venezuela to strengthen commercial ties under ALBA. But instead of finding willing government partners, NicaExport’s efforts were frustrated by both administrations’ lack of cooperation.

Ivan Saballos, NicaExport’s executive director at the time, said he thought the problem was that neither Chavez nor Ortega wanted “the first success of ALBA to come from the private sector.” He added, with frustration, “So far ALBA is just blah, blah, blah; there’s nothing concrete.”

Three years later, the growing trade numbers and $1.1 billion in Venezuelan aid for Nicaragua shows that ALBA has moved slightly beyond blah, blah, blah. But the business sector’s continued complaints about unclear rules and exclusion indicate that ALBA is still something that is not entirely concrete, inclusive or even understood.

“A free-trade agreement would offer the hope, at least, of a more permanent arrangement that would benefit Nicaraguan exporters,” said opposition Liberal Constitutional Party congressman Francisco Aguirre, of the legislature’s economic commission.

“However,” he hedged; “that’s assuming the Venezuelan economy does not totally collapse.”

One Response to “Venezuela and Nicaragua trade politically seismic”