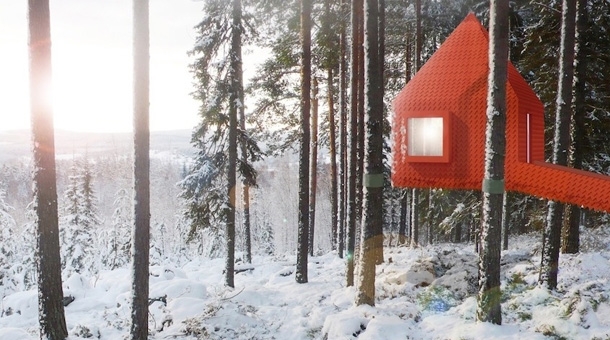 Last year, we told you about a conceptual treehouse in Sweden that looked like a Robert Morris sculpture screwed onto a tree trunk — that or a scene from Predator. It’s the kind of quixotic idea you always hear about in the design world, but because of money or politics or sheer technical impossibility, it never comes to fruition. This one was actually built.

On Saturday, the Mirrorcube will be unveiled alongside the almost-as-lofty Cabin (below) –two tree-bound hotel rooms done up by modish Swedish architects and just begging to sleep design junkies, who kinda like the idea of a treehouse, but are too cool for the whole Swiss Family Robinson thing.

Here’s the inside of the Mirrorcube, by Tham & Videgård architects — unapologetically Scandinavian.

Ornithology dorks rest assured: a layer of ultraviolet color, visible only to birds, is laminated onto the mirrored facade, so they won’t go smacking into your bedroom. The rooms form the first phase of Treehotel, a new lodge in the fairytale-esque boreal forest of Harads, Sweden, about 40 miles south of the Arctic Circle. Eventually, there’ll be other rooms, all hanging 13 to 20 feet in the pines, with whimsical names like the Bird’s Nest (a reference to Herzog & de Meuron’s stadium of the same name?), the Blue Cone, A Room with a View, and, awesomely, the UFO. Some renderings:

Like we’ve pointed out before, treehouse hotels aren’t especially new. They’ve got ’em in Oregon, the Amazon, Costa Rica, South Africa — all over the place. This one is different because it moves beyond adventure kitsch into high design (the UFO, perhaps, excluded). If the pics don’t prove it, just check out the prices. A night in the Mirrorcube will set you back about $575.

Suzanne LaBarreSuzanne is a staff writer at Co.Design.