– Shahram Amiri, the Iranian nuclear scientist who claimed to have been kidnapped by the U.S. and returned to the Islamic Republic to a hero’s welcome today, was handed more than $5 million by the CIA to provide intelligence on the regime’s atomic program, according to intelligence officials interviewed by The Washington Post.

The paper noted that while there was no obligation for Amiri to return the cash — agents reportedly received significant cooperation from him — he may find it hard to access the greenbacks from within the Islamic Republic. “Anything he got is now beyond his reach, thanks to the financial sanctions on Iran,” an unnamed U.S. official told the paper. “He’s gone, but his money’s not. We have his information, and the Iranians have him.”

That source said that the $5 million payment to Amiri — who worked at Malek-e-Ashtar Industrial University, which has close ties to the influential Revolutionary Guard — reflected the fact that he had coughed up high-quality information, including confirming claims made by other sources and providing details on several nuclear facilities. 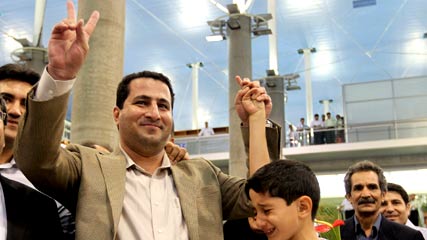 Since arriving back in Tehran early this morning, Amiri has given a string of news conferences in which he denied knowing anything about the country’s nuclear program. The scientist told Al-Jazeera that he did not have “any expertise in any nuclear domain or anything else pertinent to the military nuclear domain.” Hassan Qashqavi, a deputy foreign minister who sat beside the academic throughout the interview, added, “We deny that Amiri is a nuclear scientist. Amiri is a researcher at one of Iran’s universities.”

During this morning’s news conferences, Amiri retold the story of how he ended up in the U.S., claiming that American agents kidnapped him while on pilgrimage to Saudi Arabia in June 2009. “I was abducted in Medina. … Then I was transferred to an unknown location in Saudi Arabia,” he told Press TV. “They injected anesthetic drugs into me. They took me to the United States on a military plane. During my stay in the first two months, I was subjected to heavy psychological and mental tortures by CIA interrogators.”

Most shocking of all, he said, was the threat that if he refused to “cooperate with them, they will hand me over to Israel and there are hidden prisons in Israel and there will be no trace of you any more.” In contrast, the U.S. says that he was in the country “of his own free will” and denied there was any ill treatment.

And while U.S. officials say that Amiri happily took their money, he argues that he stuck to his principles and turned down $50 million and a home in Europe — supposedly offered by the CIA to persuade him not to return to Iran — and $10 million “in exchange for my participation in a 10-minute interview with CNN.” When these attempts at bribery failed, Amiri’s captors allegedly allowed the scientist to hand himself in at Iran’s Interest Section at the Pakistani Embassy in Washington, where he asked to be sent home. (As Iran and the United States do not maintain diplomatic ties, the Pakistani Embassy looks after Iran’s interest in the capital).

U.S. intelligence sources interviewed by several news outlets have hinted that the defector returned for other reasons: he was worried the regime was about to take revenge on his wife and son. “He just wanted to see his family and — unfortunately — he chose a dumb way to do it, lying about what happened to him here to try to build up his credibility back home,” one unnamed official told CNN. Those “dumb” actions included recording a series of contradictory videos this spring — alternately accusing his CIA captors of inflicting torture and abuse, and saying that he was enjoying his freedom in America.

The Iranian at the center of a murky intelligence caper — stretching from the deserts of Saudi Arabia to the strip malls of Tucson to the diplomatic outposts of Washington and back to Tehran — is a simple researcher with no special knowledge of his country’s nuclear program, an Iranian official declared Thursday.

Shahram Amiri, who arrived in Tehran on Thursday, had been described previously by the Iranians as a radio isotope scientist employed by the Atomic Energy Organization, and an affiliate of an elite university that trains specialists for the Revolutionary Guard. In a report Thursday, the Washington Post cited unnamed U.S. officials as saying Amiri had been paid $5 million after defecting and cooperating with American intelligence agencies.

But Hassan Qashqavi, a deputy foreign minister who appeared alongside Amiri at a media briefing in Tehran, insisted that Amiri knew nothing about Iran’s nuclear program.

Intelligence insiders told The New York Times that Amiri was on the CIA payroll several years before his disappearance in the summer of 2009, and supplied more than enough information to justify his $5 million paycheck. The unnamed Washington sources revealed that the scientist-turned-spy sneaked out secrets that eventually appeared in a 2007 National Intelligence Estimate on Iran’s nuclear capabilities, which predicted the regime would be able to build a bomb between 2010 and 2015. They also stated that Amiri described in detail how the college where he taught — Malek Ashtar University outside Tehran, which has previously been linked with the Iranian Revolutionary Guard — became the headquarters of the regime’s atomic program.

These intelligence releases are designed to undermine allegations Amiri has made since he arrived home Thursday. In a succession of interviews with Iranian media, the academic claimed he was snatched at gunpoint by American agents while on pilgrimage in Saudi Arabia in June 2009 and whisked away to the U.S., where he was tortured and ordered to reveal details of Iran’s nuclear push. He claims he said nothing despite being offered $50 million and a new home in Europe by the CIA.

“His safety depends on him sticking to that fairy tale about pressure and torture,” one U.S. official with knowledge of the operation to woo Iranian scientists told the Times. “His challenge is to try to convince the Iranian security forces that he never cooperated with the United States.”

The question now is, will the Islamic Republic keep playing along with that fairy tale in the face of ever stronger U.S. allegations?

Farhad Khosrokhavar, an expert on Iran at the School for Advanced Studies in the Social Sciences in Paris, told AOL News that the regime is fully aware that Amiri “has been playing a double game and cooperating with the Americans.” However, he believes that for the next few months, President Mahmoud Ahmadinejad and his officials will continue to present the scientist as “a hero of opposition to the United States.”

And Iran desperately needs a hero like Amiri — who claims he outwitted his U.S. captors and found refuge at the Iranian Interest Section at the Pakistani Embassy in Washington last week — to counter recent high-profile American victories, such as the U.N’s decision in early June to place tougher sanctions on the Islamic Republic.

Amiri’s cautionary tale, as told by the Iranian media, could also discourage other nuclear scientists from fleeing to the U.S. “The regime can say, ‘Don’t go to America, look what happened to Amiri — he was tortured and treated very badly,'” Khosrokhavar explains.

But while Amiri may look like the regime’s darling at the moment, that could soon change. “Maybe in a few months time, when his propaganda value has been depleted, he will be in for a surprise,” Khosrokhavar says. “Perhaps he will die in a tragic car accident. These things happen in Iran.”
Filed under: Nation, World
Tagged: Central Intelligence Agency, International relations, Ir n – Noticias, Iran, Iranian nuclear program, iranian nuclear scientist, Iranian Revolutionary Guard, Iranian scientist, IranianNuclearProgram, IranianNuclearScientist, IranianScientist, Mahmoud Ahmadinejad, National Intelligence Estimate, scientist defects, ScientistDefects, Shahram Amiri, ShahramAmiri, spy, Tehran, US