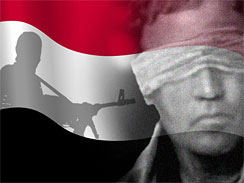 Tribal gunmen kidnapped two American tourists in Yemen on Monday and are demanding the release of a jailed tribesman for the pair, security officials said.

A senior State Department official in Washington confirmed the kidnappings to CBS News and said the U.S. was working with Yemeni authorities to resolve the situation.

The security officials, a taxi driver and tribesmen said the two – a man and a woman – were seized while traveling in al-Hudaydah province west of the capital San’a. The couple had been hiking in the Hamya Mountains.

One of the abductees was able to contact embassy officials to report the situation.

The kidnapped man is believed to be an attorney living in Dubai.

The officials spoke on condition of anonymity because they were not authorized to speak to the media.

Taxi driver Mohammed Saleh, who was driving the two, said six gunmen stopped them on the road and took them to the al-Hamra village. Al-Sharda tribesmen said the hostages were now “guests” in the village.

The kidnappers also abducted a Yemeni driver and translator traveling with the Americans, the New York Times reported Monday.

The abductors are from the Shardah tribe, an unidentified Yemeni official told the Times. They sought the release of Mahmoud Shardah, a prisoner from the same tribe, the official added.

Kidnappings are endemic in Yemen and are usually carried out by disgruntled tribesmen hoping to win concessions from the government. In the past few years, however, al Qaeda has begun kidnapping foreigners as well, often with lethal results.

They often take place outside the heavily guarded capital, underlining the fragility of security in rural areas. It is this weak government authority outside San’a that’s believed to have tempted al Qaeda militants to seek refuge in the impoverished Arab nation in the southern corner of the Arabian Peninsula, thus posing a threat to the interests of the West and its allies in a strategic part of the Middle East.

The United States and other Western powers have been increasing their support to Yemen’s security forces to enable them to better deal with the al Qaeda threat. However, such efforts are often frustrated by the protection offered by tribal chiefs to the militants, the country’s difficult mountainous terrain and the deep anti-Western sentiments shared by many Yemenis.

A Yemeni tribal group has claimed responsibility for the kidnapping and it is not believed to be linked to “terrorism” as it is understood by most Americans.

Nevertheless, the kidnapping comes a day after radical American-born Yemeni cleric Anwar al-Awlaki called for the killing of American civilians in a video released by the al Qaeda branch in Yemen.

“We are actively trying to find him and many others throughout the world that seek to do our country and to do our interests great harm,” he said.

The Obama administration admitted in April that al-Awlaki is on the C.I.A.’S list of targets for assassination, despite his American citizenship, reports CBS News correspondent Lara Logan.

“Because he’s so visible, it would be very important to get him because it would send a message to radical Islamists and jihadists around the world,” said terror expert Neil Livingstone.

Al-Awlaki is believed to have been in contact with Maj. Nidal Hasan, who is accused of waging a shooting rampage at Fort Hood in Texas, and with Umar Farouk Abdulmutallab, the Nigerian man who allegedly tried to blow up a Delta passenger jet over Detroit on Christmas day. He was also linked to several of the plotters in the 9/11 attacks.