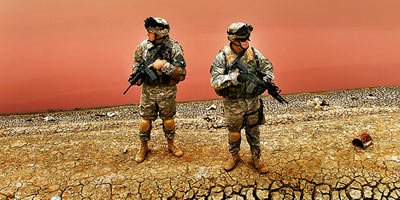 We have no illusions about the challenges ahead of us,” Secretary of State Hillary Clinton writes in the State Department, But we have to prioritize, and any list has to begin with the local army. Without a monopoly on the means of violence, we don’t stand a chance.

If you look at the last 60 years of civil wars, that’s the obvious conclusion. In her new book, Securing the Peace, Harvard’s Monica Toft analyzed 129 civil wars that raged in the last six decades (Rwanda, Colombia, Somalia, Sri Lanka, Democratic Republic of the Congo, Sudan, and Lebanon among them). She concluded that security-sector reform—the wonky phrase for building an army and a local police force—is essential, and too often neglected, in creating a lasting peace. “Building the Afghan National Army is a key piece to stabilizing the country,” Toft says. It’s not the only one, but without it, any settlement, as countless others before it have, will prove short-lived.


Biggest problem, is the political question looming over Afghanistan: is President Hamid Karzai’s government worth fighting for? If Karzai is seen as illegitimate by the Afghan people in the wake of the contested 2009 elections, the entire counterinsurgency strategy—even beyond just building a national army—is almost hopeless. Without sound political leadership in Kabul, even the economic and development plans that might come with a stable Afghan National Army begin to look like a pipe dream. So, it is full-speed-ahead suiting Afghans with military uniforms, and it is up to Karzai to make the flag on their shoulder worth wearing.