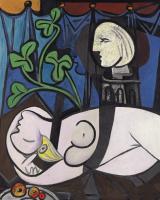 A Dash of Cold Water

There’s been much fuss over “Nude, Green Leaves and Bust,” the 1932 Picasso that sold for $106.5 million at auction last week. Roberta Smith devoted an article in “The Week in Review” section of the New York Times to the guessing game about the anonymous buyer. Bemoaning the “irksome” secrecy of art sales, she conjured a rogue’s gallery of possible bidders, including “Buyer X,” a “puppet master,” a “Russian oligarch” fearing “home invasion or too much unfriendly attention from Vladimir Putin,” and “someone with vast sums of money stashed in a Swiss bank account or a dubious tax shelter.” All very James Bond. Buyer X must be smiling.

Anyway, on one score, the article, along with most others I have read, is unambiguous: The Picasso claimed “the highest price ever for a work of art at auction”—a “world record.” Technically speaking, the number is the highest—the largest pile of US dollars ever spent on an artwork at auction. But adjusted for inflation, this Picasso is a far cry from Van Gogh’s 1989 record-setter, “Portrait of Dr. Gachet,” which, at $82 million at the time, would be worth about $140 million in today’s dollars.

Leaving out inflation is a bit like measuring one high jumper’s performance in inches and another’s in centimeters. It’s worth noting, for context, that we have had at least three private sales in the neighborhood of $140M in recent years. And there have been a couple of auction sales exceeding $106 million in 2010 dollars, including a Picasso, “Garcon a la pipe,” which sold in 2004 for just over $104 million.

All of which is to say, Buyer X doesn’t get the gold medal after all. As Smith rightly points out, record mania is something of an irksome diversion in itself. In any event, the search for the mystery collector continues. Anyone have a clue?