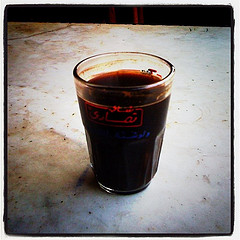 BLOOD
*As the Syrian uprising gets more serious, the logo for the facebook group “Syrian Revolution against Bashar al-Assad 2011” is becoming proportionately bloody. The group, which now counts more than 150,000 members, posted footage of a funeral in the small city of Houla that was broken up by gunfire. As they arrive to the central square, the firing starts one minute into the video and men start to fall, bloodied. Dozens of unarmed civilians duck and begin running for cover as the non-stop gunfire continues from what appear to be snipers. The Syrian government continues to blame “armed gangs” for the violence, but countless video clips show unarmed protesters dodging invisible sniper bullets in a pattern being repeated across the country.

*In Daraa, at least 30 people are reported dead over the past two days as Assad relies on the military to crush what is being called “the cradle of the uprising.”

ARMS
While President Bashar al-Assad is relying on a conventional army to crush protesters, the BBC’s Kim Ghattas writes that an Internet army of activists is fighting back using facebook and Twitter. In the article called “Facebook and Twitter: Two weapons in Syria’s demonstration,” Ghattas reports that the social media is giving journalists a window into events in Syria since the government has imposed a blanket ban of media coverage.

DEAL
Yemenis in at least 18 different cities and towns launched a civil disobedience campaign to pressure President Ali Abdullah Saleh to finally step down. A senior member of the Yemeni opposition said it looks like a transition deal is finally falling into place after near daily protests affecting the country since the beginning of February. The GCC-brokered deal calls for Saleh to resign within 30 days, with a transitional government to rule until elections are held. It is not clear who would head the new government, but the incoming cabinet would face a longstanding revolt in the north, a growing Al-Qaeda presence in the south, along with a secessionist movement that wants to create an autonomous south, the region home to the country’s oil and gas resources.

COMMENT
On the facebook group “We are all Khaled Said,” one of the catalysts for the January 25th Egyptian revolution, the administrator asks, “’It’s not worth it,’” ‘Egypt won’t change,’ ‘just put up with it’ – these are the people who ask where the revolution went?” More than 1,700 people like the comment.