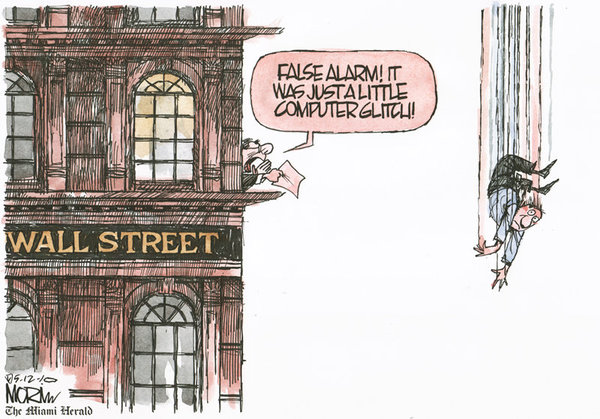 Last week’s market swoon briefly shaved about $1 trillion dollars off of the value of U.S. equities. But it may have a much more lasting and beneficial effect on the NYSE Euronext — the exchange world’s resident tortoise.

Until last Thursday, the NYSE’s gripes about the dangers of market fragmentation and opaqueness seemed like little more than the sour grapes of a former monopoly pining for the old days of fat spreads and easy living. But after a still-inexplicable near 1,000-point drop in the Dow Jones Industrial Average, even U.S. lawmakers are now parroting the Big Board’s complaints.

It wasn’t long ago that the NYSE itself embraced the electronic exchanges and dark pools it’s partially blaming for last week’s crash. Although at first it had to be pushed kicking and screaming into the technical nirvana of electronic trading, it snapped up Archipelago Holdings in 2005, then merged with Euronext in 2006; last year it launched its own dark pool in Europe. However, none of that history seems relevant to NYSE executives these days. They prefer to talk up their old-school specialists as a valiant army of Captain Americas who stood firm last Thursday against the recklessness of opaque trading systems and the high-frequency algo-trading horde.

Of course, the NYSE failed to stop the slide, and its curbs — known as liquidity replenishment points — may have even exacerbated it. But the NYSE says that’s just because its competitors have been allowed to run wild, thanks to unwelcome bits of a 2005 rule called Regulation NMS. The rule was designed to increase competition and provide faster, cheaper ways of making markets.

It’s understandable the NYSE is using this moment to shine a light on what differentiates it from its perhaps more hip and nimble competitors, some of which exist in a nebulous regulatory arena where they can skirt many of the rules that harness registered exchanges. The Big Board handles just 23% of NYSE-listed trades today, down from nearly 80% in 2005. Much of that volume now rests with upstarts like BATS Exchange, which began as a storefront alternative trading system in Kansas City in 2006, turned itself into an exchange after capturing a market edge in 2008, and now controls roughly 11% of the daily equity market volume in the United States.

Last Thursday, when the NYSE dusted off its quirky curbs and handed trades over to the humans on the floor, computer-driven trades routed around the NYSE to some of these often less liquid markets. But those who stayed with the slow and steady approach of the NYSE now seem pretty brilliant. In the end, sell orders at the other trading platforms swamped the buys, and a cascade of prices ended with some large-caps briefly trading for pennies a share. Then, in the post-mortem, many of those trades had to be busted, leaving speed-seeking investors licking wounds and holding unwanted stock.

The bugaboo, the NYSE was quick to point out, existed in the regulation that allowed all this unfettered competition in the first place. “Because the New York Stock Exchange had switched to LRPs, and because Regulation NMS allows traders to bypass us, orders were routed to electronic markets that had not mitigated the volatile price declines and which had limited amounts of liquidity on their books,” NYSE COO Lawrence Leibowitz told a House Financial Services subcommittee yesterday. “In turn, a spasm of selling spread through the markets with little liquidity, and no opportunity for the markets to pause or human judgment to intervene.”
0:00 /6:02NYSE CEO explains selloff

The NYSE does have a point. The sheer number of trading systems being used (more than 40 by the NYSE’s count) has added to the complexity of trying to figure out what caused last week’s market decline. And the SEC has recently raised its own concerns that market fragmentation — particularly when stock volume is ending up in shadow systems — may be increasing market volatility and impairing the ability of investors to get the best execution at the best price. The NYSE estimates that more than 37% of the daily volume in NYSE-listed securities now occurs off exchanges entirely and that 30% of the share volume in all national market system stocks runs through such opaque dark pools.

Although the NYSE is now a hybrid exchange running its own London-based dark pool, that hasn’t stopped it from singling out these sources of “undisplayed liquidity” for ire. The exchange recently complained to the SEC that the systems are taking some of the most valuable order flow — particularly that coming from long-term and institutional investors — while leaving the dregs (such as the high-frequency traders and other sources of “toxicity”) flowing through the exchanges.

Spurred into action by the downdraft, lawmakers and regulators are currently focused on fashioning a system of uniform circuit breakers that would kick in when markets or individual stocks decline more than a certain percent (score one for the NYSE).

But the Big Board has its eye on much broader reform, one that might also benefit its own trading volume even if it doesn’t put the NYSE back on the top of the exchange stack. In January, the SEC began seeking comment for a broad review of the effectiveness of regulation in the equity markets. On April 25, the NYSE offered its suggestions, noting the “toxicity” problem and the need to better regulate “off-exchange trading.”

Had the NYSE persevered way back when Regulation NMS was first being debated, things might look far different. Back then, the SEC considered making quotes emanating from the NYSE’s floor brokers among those covered in its trade-thru rules. This would have effectively slowed down trading last Thursday and universalized the NYSE’s curbs, while also helping to protect NYSE old perch as a source of unparalleled volume and liquidity.

Alas, fast markets were seen as fair markets, with the added competition driving down the cost of trading for large and small investors alike. The NYSE had to gobble up electronic exchanges just to compete. While it is too late to turn back the clock, the NYSE can only hope recent market hiccups may make regulators wish for a simpler time when floor brokers held sway and the volume still came easy.