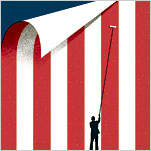 United States has fallen from the ranks of economically “free” countries, according to the conservative Heritage Foundation’s Index of Economic Freedom World Rankings.

America has slipped into the category of “mostly free” this year — just below Canada and above Denmark.

The Heritage Foundation analysis cites “notable decreases in financial freedom, monetary freedom, and property rights” as reasons that the United States has dropped out of their list of totally “free” countries

Though the analysis of American freedom acknowledges a longer-term trend stretching back to the end of the Bush administration, it seems to put the lion’s share of blame on the policy initiatives of President Obama:

“The national government’s role in the economy, already expanding under President George W. Bush, has grown sharply under the Administration of President Barack Obama, who took office in January 2009. Economic growth, which collapsed in 2008, had resumed by the second half of 2009, but legislative proposals for large and expensive new government programs on health care and energy use (climate change) have increased prospects for significant economic disruptions and raised concerns about the long-term health of the economy.”

The index puts America as the 8th freest nation in the 2010 index, having fallen 2.7 points since 2008 and now trailing Canada as the second freest country in North America.