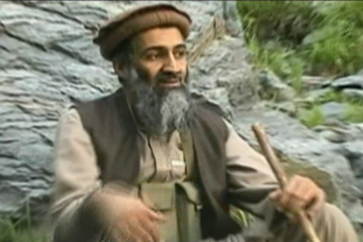 Osama bin Laden has in a new audio recording threatened to kill any Americans that al-Qaeda takes prisoner if Khalid Sheikh Mohammed, considered as one of the masterminds behind the September 11 attacks, is executed.

The latest recording purportedly from the al-Qaeda chief was broadcast on Al Jazeera on Thursday.

“The day America will take such decision [to execute Mohammed and any others] it would have taken a decision to execute whoever we capture,” Bin Laden said.

The White House did not respond directly to the comments, but Robert Gibbs, the White House spokesman, said: “The president has rightly increased our tempo and put pressure on the al-Qaeda network.

“We see that al-Qaeda has nothing to spread but hate and that’s why the administration will keep up the pressure to destroy the al-Qaeda network.”

Mohammed and four other people allegedly involved in the 9/11 attacks are due to go on trial in the US, where prosecutors are expected to seek the death penalty.
in depth

Bin Laden and Palestine
Timeline: Messages from bin Laden
The $30bn pair of underpants
The search for bin Laden
Growing up with bin Laden

Mohammed was captured in 2003 by Pakistani troops and sent to the US prison facility in Guantanamo Bay, Cuba in 2006, where he was expected to undergo a military trial.

But last November, Eric Holder, the US attorney-general, said that he would try Mohammed in a New York civilian court.

The US government is currently deciding whether to overturn that decision following opposition from Michael Bloomberg, the mayor of New York, and legislators in Washington.

US officials have said that presidential advisers are nearing a recommendation that Mohammed, along with four others, be tried in a military tribunal.

Bin Laden also said that Barack Obama, the US president, is “following in the footsteps of his predecessor”, a reference to George Bush, the former US president.

“The politicians in the White House were practicing injustice against us and still they are. Especially by supporting Israel in its continuous occupation of Palestine.

“They used to think that America across the oceans is protected from the rage of the oppressed until our reaction was loudly heard at your home on the 9/11 with God’s help,” he says in the recording.

Nearly 3,000 people were killed at the World Trade Centre in New York, the Pentagon in Virginia and in a field in Pennsylvania during the co-ordinated attacks in 2001.

The last audio recording attributed to bin Laden was released on January 24.

In it, he claimed responsibility for alleged attempted attack on a US airliner on Christmas Day and vowed there would be further attacks on the US unless Obama took steps to resolve the Palestinian situation.
Bin Laden threatened to kill Americans if Mohammed, pictured, is executed [Al Jazeera]

Abdel Bari Atwan, the editor-in-chief of the al-Quds al-Arabi newspaper told Al Jazeera that bin Laden’s mentioning of Obama in his latest recording indicates that the message has a dual meaning.

“Osama bin Laden believes that the euphoria which erupted in most of the Arab countries, Muslim countries, after the Obama election now is eroding, is disappearing.

“Obama is not really as popular as he used to be when he was elected.

“So Osama sees the opportunity to say to the Muslim world: ‘Obama is actually not going to deliver what you expect him to deliver; the peace process is completely dead; Jerusalem is boiling; al-Aqsa mosque is under threat of Israeli demolition – now the only way to treat Americans is the way we treated them on 11 September’.”