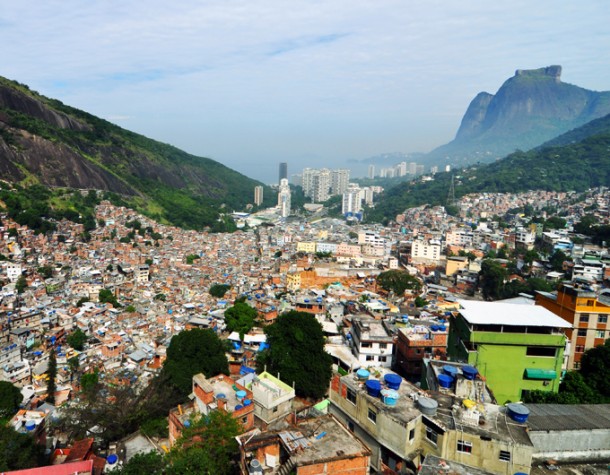 Even on a recent Saturday afternoon, her salon was empty. “There are not as many parties as before,” Oliveira complains. Already past 5 p.m. and no customer has come in for a 20-reais ($10) simple straightening or the 100-reais ($50) longer version. She already had to dismiss four employees. In the old days, dryers and straighteners would work continually. “Until midnight,” Oliveira says.

Funk parties in Rio slums have become world-famous for their scantily-clad girls and songs with sexually explicit lyrics. “There used to be parties in Rocinha from Monday to Monday — for free and with lots of drinks,” says Fabiana Escobar a.k.a. Dangerous Bibi, the owner of the now-bankrupt Danger Girl brand that used to make clothes for girls who liked to party hard on the dance floor.

With the UPP, “there are no parties anymore and girls have no money or reason to dress nice,” complains Bibi, who is also the former wife of drug dealer Saulo de Sá Silva, known as the “Baron of Cocaine” in Rocinha.

In January, she closed Danger Girl. Now she lives on renting out commercial spots in Rocinha. She has started a blog and is now famous—to the point of being the inspiration behind a character in the most popular telenovela currently on Brazilian TV.

Bibi rents two beauty salons. They are being used by an evangelical church and a bar. Folha also counted 16 beauty salons, 14 bars and nine churches that have opened in places previously used for funk parties.

Up and down the favela’s steep hillside, police have put an end to an economy moved by cocaine. “The measure has hit all those who depended on money coming from the dealers. Before they could not leave Rocinha, and spent all their cash here,” says taxi driver Manuel Vale, 48.

The order was also a shock for party organizers. The funk parties in Rua 1 were closed by the Civil Defense because the place had no emergency exit. “I’m trying to meet the requirements,” says promoter Marcelo Tocão, who had about 3,000 people attending his parties and now has no more than 500.

UPP Commander, Edson Santos, is a kind of a manager in Rocinha. He is in charge of 700 men who keep the slum safe. “Citizenship is a two-way street. Parties ended because they weren’t fitting the rules.”

“Now there are rules,” says Allan Barroso, 21, organizer of the Social dos Atores party. New at this game, he tries to be up-to-date with all the local ordinances from the police and fire department.

A few days ago, the party made it through two blackouts. The venue was full of people when rain started flooding the streets and made the “landslide alert” siren ring from 4 to 6 a.m.

“Down with the UPP,” shouted 14-year-old Verme upon seeing a police car driving by. The nephew of a former drug kingpin, he got into several fights until he was kicked out from the party at 3 a.m. Before UPP, this was Sodom and Gomorrah”, says Bibi, refering to the Biblical towns destroyed by their immorality.

In October 2012, Bibi says she was taken to the police station because of loud sound at her birthday party. “Police’s intolerance is partly due to the people who live here and call them all the time for no reason.”

Father Dito, from the Nossa Senhora da Boa Viagem church, says he can now feel that he is “no longer living in a lawless world.” He believes criminals have abandoned the mentality of doing whatever they want.

“The party’s over, thank God,” adds Zilda Ameida, 44, a housekeeper and member of Brazil’s Worldwide Church of God’s Power

Major Edson says the “drug dealers’ widows” are getting along in the new era. “They are trying to live honestly.”

Pacification has given risen to new kinds of businesses — like the Hotel Boa Viagem, which opened last January. It covers four floors of a building with 106 apartments. Half of them were converted to rooms charging 98 reais ($49) a night.

After eight months of refurbishing, the fourth floor of the old building is now ready for guests. Folha reporters were the first to stay in rooms 418 and 420, with air-conditioning, flatscreen TVs, a sink to wash dishes and an en-suite bathroom.

Manager Marco Antônio da Conceição, 26, says there are no vacant rooms for the Catholic Church’s World Youth Day in July. The first shipment of tourists are due to arrive this month. “A group of 29 French confirmed they were staying for one week. They want to see what a slum looks like.”

A sea of parabolic antennas are another symbol of pacification. “They used to be illegal,” says Luciano Viana, owner of Evolution Internet which — lawfully — provides cable TV and Internet access. “Bureaucracy and competition are tougher,” he says. Now he has 100 customers who pay 58 reais ($29) per month, as opposed to 700 paying 30 reais ($15) for illegal service.

But perhaps the most notable emblem of the changing times in Rocinha is on one of the shanty town’s terraces: a sign advertising yoga classes.