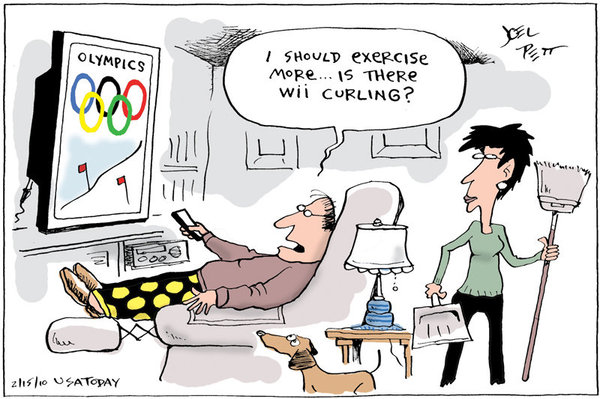 Street trading is often described as a blood sport. But inside the great investment houses, the sport of the moment is, of all things, curling — that oddball of the Olympics that is sort of like shuffleboard on ice.

This slow-poke game, which originated in 16th-century Scotland, has captivated the Type-A world of Wall Street almost by accident. CNBC, whose market chatter is the background music on trading floors, switches to curling from Vancouver shortly after the closing bell.

And so, after a day of braying for money in the markets, traders are winding down with curling. It is, fans say, a bit of after-market therapy. Curling is so slow and drawn out that it becomes mesmerizing.

“It is like drinking merlot,” said Douglas A. Kass, the president of Seabreeze Partners, who got hooked on Olympic curling a few years ago via CNBC.

People at Bank of America, Citigroup, Goldman Sachs, JPMorgan Chase and even the Treasury Department have gone a bit curling crazy. Terms like “kizzle kazzle” — a curling stone that is wobbled to compensate for slush on the ice — have suddenly entered the Wall Street lexicon. CNBC’s ratings have gotten a boost, too.

But, really: curling? To the uninitiated, the game seems like horseshoes combined with housekeeping. One team member slides a 42-pound stone toward the target zone, or “house,” while two “sweepers” guide it along by frantically sweeping the ice with brooms. Not exactly super-G.

But aficionados say it isn’t about thrills (or the lack thereof). It is about strategy and precision. Curling is like chess on ice, and that, Wall Streeters say, it part of its quiet appeal.

Jake Siewert, a counselor to the Treasury secretary, Timothy F. Geithner, said curling provided a welcome respite from the usual shout-’em-down-style of business TV. “It’s better than that thing where they have eight people in a box screaming at each other,” he said.

Raj Atri, a research analyst at Bank of America, said the game’s plodding pace was a plus. Curling is so leisurely that he can easily multitask, with one eye on his Bloomberg terminal that provides financial data and another on a game.

It never would’ve happened without CNBC — or, in all likelihood, at any other time of year.

“Let’s face it: if baseball and football were in the winter, nobody would be watching,” said Robert P. Kelly, the chief executive of Bank of New York Mellon, who took up curling when he was growing up in Canada. He is a former “skip” — the player who usually directs the strategy during a game —and dispenses curling tips to employees.

For Olympic curlers — and Wall Street — it is almost over. The women’s gold-medal match is Friday at 6 p.m. on CNBC. The men’s final is on Saturday.