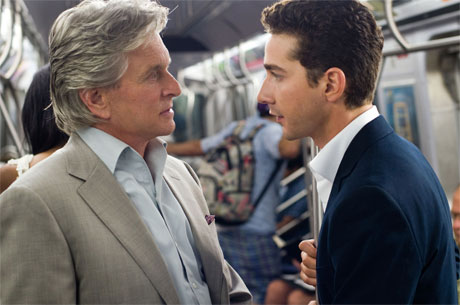 Sammy Glick, the backstabbing climber of Budd Schulberg’s Hollywood satire What Makes Sammy Run, Wall Street’s gel-slicked corporate raider Gordon Gekko (Michael Douglas) was intended as a cautionary anti-hero but came to be seen as a model for success at all costs. Oliver Stone has often said that he had written the 1987 film as a morality tale, but by making his villain so attractive, and so damn quotable, he ended up inspiring a generation to charge into finance with “Greed is Good” as their war cry. Most likely these were the same people who, as kids, had wanted to be archaeologists after seeing Raiders of the Lost Ark—and the same people who, all grown up, spearheaded the financial meltdown, setting the perfect backdrop for the sequel, Money Never Sleeps, which screened at Cannes this morning.

As a rule, sequels need to outdo the original—larger body counts, grosser gross-out gags, higher stakes. And so there was no better timing for a second Wall Street installment than just before the crash of 2008, when the leveraging of toxic debt had inflated the real-estate bubble to the point of bursting; bonuses were exponentially higher; and profits were counted in billions, not tens of millions.

It’s an age that makes even Gordon Gekko blush. Upon his release from an eight-year sentence resulting from the events of the first movie, Gekko seeks to make a buck not from the markets, nor off the backs of the working man, but from royalties from his new book, a condemnation of the greed he formerly endorsed. (He even owns a Metrocard, unlike the majority of New York–based bankers I know.) Gekko’s only priority, it seems, is to reconnect with the daughter he abandoned.

This time around, then, the job of playing a finance titan as an epoch-defining villain falls to Josh Brolin, a cutthroat partner in the investment bank Churchill Schwartz. (As he did with football teams in Any Given Sunday, Stone uses fictional stand-ins for America’s financial behemoths.) Brolin performs his role with brio, but this film isn’t about the comeuppance of a villain so much as the disillusionment of a ambitious young trader, and his struggle to do the right thing. Like its precursor, Money Never Sleeps is a morality tale, but one that centers on a positive example.

Stone’s challenge this time around was to make his protagonist, Jake Moore (Shia LaBeouf), a hotshot, 20-something banker, sympathetic in an age when fresh-out-of-school Wall Street types are vilified as bottle-service-swilling douchebags. On the face of it, the casting of LaBeouf, whose grating, agitated swagger has never seemed more appropriate than in a trading room, runs counter to that goal. But his character is redeemed by the following “good-guy” factors:

• He believes in something grander than the almighty dollar. Jake is concerned not merely for the profitability of his investments but for their impact at large. (A novel concept in an age where banks have become glorified casinos.) So whereas Bretton James (Brolin) invests in oil, Jake cares deeply about alternative energy, specifically fusion. Green is the new good.

• He’s not in it for the tail. Jake seems unenthused by the banker nightlife, unrealistically ignoring the advances of a club bunny described as “an eleven.” In contrast with his counterpart in the first installment, Bud Fox (Charlie Sheen), whom we found waking up next to a nameless pair of buttocks, Jake is awoken—in his enviable apartment— by his loving girlfriend, played by the decidedly unbimbo-ish Carey Mulligan. We know she’s a good girl because, a) she’s got short hair and that’s Hollywood shorthand for “smart and liberated,” and b) she pretends not to care about money, and devotes herself to—get this—a news Web site! Ha! Oh, and she’s Gekko’s daugher.

• He’s loyal. Specifically to Louis Zabel (Frank Langella), a finance dinosaur at the head of Keller Zabel Investments, whose old-school methods of dialing the phone and fostering personal relationships have been rendered moot by computer-aided high-speed trading. After [SPOILER ALERT] Bretton James spreads rumors about the toxicity of Keller Zabel’s assets, in order to buy the firm for a fraction of its share price, prompting Louis to jump in front of a subway car, Jake vows revenge. And seeks Gordon Gekko’s help for it.

• He’s fiscally responsible. When his realtor mother (Susan Sarandon) asks him for loan after loan to uphold her foundering business, he refuses on the grounds that he simply doesn’t have the money. (It reminded me of the “Don’t Buy Stuff You Can’t Afford” sketch on S.N.L.) The Sarandon storyline, though, serves little narrative purpose other than tangentially acknowledging the role real estate played in the crash.

The makers of Wall Street: Money Never Sleeps have done their homework—the writers interviewed dozens of bankers, Stone’s father worked on Wall Street, Brolin was once a day trader, and LaBeouf passed his Series 7—and that shows. The alphabet soup of C.D.O’s, C.D.S’s, M.B.S.’s, etc., is appropriately dizzying, reflecting the complexity of the instruments that led to disaster.

The film is entertainment above all, however, and there are numerous cheeky nods to the campiness of the original, including the dumbbell-sized mobile phones, a smarmy cameo by Charlie Sheen, and more Sun-Tzu-like aphorisms. (Though they aren’t nearly as memorable as in the first movie, which is where the catchprase “money never sleeps” is from.) Stone also relies on intentionally hokey stylistic throwbacks, including pan wipes and iris shutters.

The one problem I had with the movie was the brief return, towards the end, of the evil Gordon Gekko, which seems to be there only as a tongue-in-cheek concession to fans of the first film, a pretext for Gordon to slick his hair back one more time, and knot his fat power tie with a full windsor. But the toe-dip into the Gekko of old seems inorganic, and doesn’t reveal a thing about the current crisis.

In his book The Moviegoer, Walker Percy wrote about the phenomenon whereby a place is not “certified” until it has appeared on film. I felt a related quickening by seeing New York and the financial crisis that has been part of our daily life for two years finally get a just cinematic treatment.