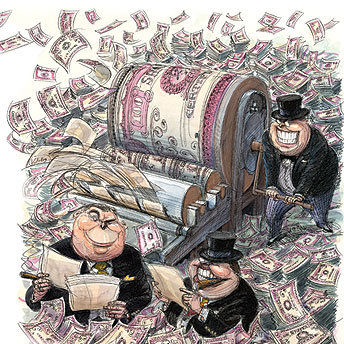 President Barack Obama’s $3.8 trillion fiscal 2011 budget puts an emphasis on job creation with $100 billion in additional stimulus spending, along with higher taxes for the wealthy in an attempt to narrow the deficit.

Obama’s new budget blueprint preaches the need to make tough choices to restrain run-away deficits, but not before attacking what the administration sees as the more immediate challenge of lifting the country out of a deep recession that has cost 7.2 million jobs over the past two years.

The result is a budget plan that would give the country trillion-dollar-plus deficits for three consecutive years. Obama’s new budget projects a spending increase of 5.7 percent for the current budget year and forecasts that spending would rise another 3 percent in 2011 to $3.83 trillion.

“Until America is back at work, my administration will not rest and this recovery will not be finished,” Obama declared in his budget message.

Addressing the fact that his budget first projects big increases in the deficit before starting to lower these imbalances, Obama told reporters, “It’s very important to understand, we won’t be able to bring down this deficit overnight given that the recovery is still taking hold and families across the country still need help.”

Obama’s budget offers tax cuts for businesses, including a $5,000 tax credit for hiring new workers this year, help for the unemployed and $25 billion more for cash-strapped state governments. All the temporary measures would boost the deficit over the next two years by $245 billion.

The deficit for this year would surge to a record-breaking $1.56 trillion, topping last year’s then-unprecedented $1.41 trillion gap, a number which had dwarfed the previous record of $454.8 billion set in 2008 under former President George W. Bush.

The administration is forecasting that deficits over the next decade will add an additional $8.5 trillion to the national debt, even if Congress adopts the administration’s package of proposals to trim future deficits starting in 2011. Those include a three-year freeze on spending for government programs, an effort which does not touch popular benefit programs such as Social Security and Medicare and which also exempts defense and homeland security. It also proposes a boost in taxes on the wealthiest Americans, families making more than $250,000 annually, by allowing the Bush tax cuts of 2001 and 2003 to expire.

Republicans were not impressed with Obama’s deficit cutting, saying that it fell far short of the bold steps needed in light of the fiscal challenges the country is facing.

“This country is sinking into a fiscal quagmire,” said Sen. Judd Gregg, the top Republican on the Senate Budget Committee. “These circumstances call for a bold, game-changing budget that will turn things around.”

The administration argued that Obama inherited a deficit that was already topping $1 trillion when he took office and, given the severity of the downturn, the president had to spend billions stabilizing the financial system and jump-starting economic growth.

Obama’s new budget carries forward the pledge he made in his State of the Union address: To put full attention on reviving the moribund U.S. economy, an effort to convince recession-battered voters that Democrats are in tune with the issues that affect their lives.