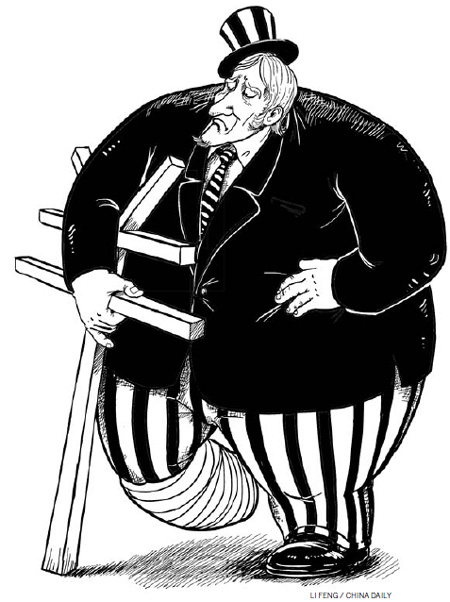 What a contrast! This was my first trip back to Asia after having spent three years living in the region. I returned to the United States a couple of months ago with enormous respect for how Asia had pulled itself together after its own devastating crisis in the late 1990s. Bouncing back and forth between these two regions has only deepened my conviction that an important shift in the gravity of global economic power from the West to the East could well be at hand.

It’s not just the Asian miracle that reinforces my belief in such a possibility. America has lost its way. In the three years that I have been away, it has become a very different place. The despair of chronically high joblessness is sapping the nation’s sense of self and poisoning the political debate. Back in mid-2007, when I relocated to Hong Kong, the US unemployment rate stood at just 4.6 percent. Today, it is more than double that at 9.6 percent. Nor is there much hope of a spontaneous resurgence of hiring that will temper the angst of this jobless recovery.

How could Asia get it so right, and the US so wrong? I suspect a good deal of the answer has to do with the arrogance of power. Long the global hegemony, the US took its image for granted and its dominance as an entitlement. Asia, on the other hand, was far more humble. It learned painful lessons from a series of very tough experiences – the post-”cultural revolution” (1966-76) chaos of the Chinese economy, the post-bubble aftershocks of Japan, and the ravages of its own financial crisis in 1997-98.

But Asia also benefited from a deep appreciation of the limits of policy. Stability became the mantra of the region – especially social and economic stability. Asian policies – fiscal, monetary, currency and regulatory – are all focused on avoiding the types of destabilizing disruptions that have wreaked such havoc on the US. Once that genie is out of the bottle, Asians are doubtful of a policy fix. That is the lesson they take from Japan and now from the US. It is a lesson that keeps Asian authorities committed to a pre-emptive approach in avoiding major threats to stability.

China is an obvious and important case in point. Hit hard by the collapse in global trade in late 2008 and early 2009, the Chinese authorities implemented an aggressive pro-active fiscal stimulus to counter the functional equivalent of a full-blown recession. Yes, there were serious consequences of those actions that have also had to be addressed – namely, deteriorating loan quality of a bank-funded infrastructure stimulus and a liquidity-driven bubble in high-end residential property markets. But the Chinese authorities wasted little time in dealing with these aftershocks as well.

Significantly, China’s regulators have been quick to build firewalls between the real economy and distressed bank lending and asset markets. That stands in sharp contrast with the approaches in Japan and the US, where asset and credit bubbles were condoned and allowed to infect the real side of their economies with devastating and lasting aftershocks. Seared by the memories of its own painful experiences of the past 30 years, a developing Asia does not trust counter-cyclical stabilization policies to put the post-bubble pieces of a crisis-torn economy back together again.

The US, on the other hand, has yet to get it right. The great debate over yet another stimulus is dominating pre-election posturing in Washington and Wall Street. Implicit in this debate is the presumption that the first stimulus – all $787 billion of it – was actually too small to jump-start a classic recovery. Up the ante, goes the argument, and the economy will finally heal.

Don’t bet on it. The lessons of Asia should give considerable pause for thought in accepting that premise on blind faith. As the experience of Japan suggests, post-bubble economies have an extremely tough time achieving policy traction. If Japan’s debt-to GDP ratio of 200 percent can’t pull its economy out of the quagmire, why should the US be any different – especially given the ferocious headwinds of a perfectly rational deleveraging of an overextended household sector. Just because the heavy artillery worked in arresting the crisis, there are no guarantees that another round of firepower will covert a weak post-crisis recovery into a strong one.

The US needs to develop a greater appreciation of the Asian mindset of economic management and policy strategy. There is nothing wrong with focusing on financial and economic stability – and aiming the full force of regulatory, monetary, and yes, even currency policy toward that end. Rather than bashing Beijing for using its currency as an anchor of financial stability, Washington needs to take a much deeper look in the mirror and finally come to grips with the perils of a savings-short US economy that has lived beyond its means for close to 15 years.

The Asian way is far from perfect – especially its lack of support from internal private consumption. That shortfall must be addressed in the years to come. But Asia offers a discipline and a focus on stability that is sorely lacking in post-crisis US.

The penchant for the quick fix is dominating the US political debate in the weeks before the mid-term election. The real lesson from Asia – and especially from Japan – is that there is no quick fix for a post-bubble economy. The US needs to crack the denial and stop blaming others for its own blunders. It needs a long-term strategy – just like Asia.

* The author is a member of the faculty at Yale University and non-executive chairman of Morgan Stanley Asia. He is the author of The Next Asia (Wiley 2009).