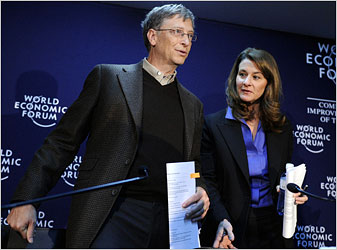 Microsoft tycoon Bill Gates announced at the World Economic Forum in Davos, Switzerland that the Bill and Melinda Gates Foundation will donate $10 billion to develop vaccines for the world’s poorest nations. The ten year program will focus on vaccines for AIDS, tuberculosis, rota virus and pneumonia.

The world’s leading philanthropist told the audience at the Economic Forum that increased vaccination could save more than eight million children by 2020. He called on governments and the private sector to do more, saying their foundation couldn’t do the work alone. Gates stated, “We must make this the decade of vaccines. Innovation will make it possible to save more children than ever before.”

Melinda Gates added: “Vaccines are a miracle, with just a does, they can prevent deadly diseases for a lifetime. We’ve made vaccines our number one priority at the Gates Foundation because we’ve seen first hand their incredible impact on children’s lives.”

After stepping down as CEO of Microsoft in July of 2008, Bill Gates now spends most of his time working with the philanthropic organization he and wife Melinda founded in 1994. They’ve alread committed around $25 billion towards global health, education and agriculture in the third world.