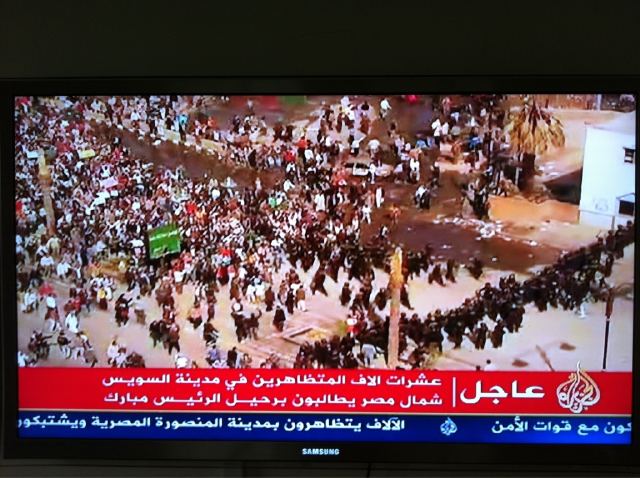 JERUSALEM – Israel expects that the regime of Egyptian President Hosni Mubarak will survive pro-democracy protests that have shaken the country over the past three days, government officials and analysts said.

The wave of demonstrations throughout Israel’s southern neighbour have raised speculation about whether Mubarak will be forced from office, and how the protest movement will affect ties with Cairo.

Egypt is one of only two Arab nations, along with Jordan, to have signed a peace treaty with Israel, and is considered a key strategic partner for Israel in the Middle East.

But Israeli officials and analysts said they did not foresee the downfall of the Egyptian government, and were confident that even regime change would not result in the breakdown of ties with Cairo.

“We have an earthquake in the Middle East … but we believe the Egyptian regime is strong enough and that Egypt is going to overcome the current wave of demonstrations,” a Cabinet minister, speaking on condition of anonymity, told journalists on Thursday.

The Egyptian demonstrations are inspired by those who overthrew Tunisian leader Zine Al Abidine Ben Ali earlier this month, but the official said Israel saw limited parallels between the countries.

“Mubarak is not Zine Al Abidine Ben Ali. There is a huge difference. The Egyptian regime is well-rooted, including the defence establishment. Their regime is strong enough to overcome the situation,” he said.

Also, the minister said, while Israel encourages democracy these protests may not be the best way to achieve it.

“Looking at the Middle East situation, I’m not sure the time is right. We look at democratisation as a longer process.”

A second Israeli government official echoed the view that the regime would weather the storm.

“The regime may be shaken by the troubles, and anything is possible, but it doesn’t have a serious air to it,” he told AFP, adding that Israel’s peace treaty with Egypt was not in danger.

“It is in the fundamental interests of Egypt to maintain its privileged ties with the West, and maintaining peace with Israel is part of that,” he added.

Israel has so far been silent on the eruption of large-scale anti-government demonstrations in Egypt, the biggest the country has seen in at least three decades, for fear of being accused of interfering in Egyptian domestic affairs.

On Wednesday, Vice Prime Minister Silvan Shalom expressed hope that the Egyptian authorities would “give their citizens freedom and rights while continuing on the good path of good relations with Israel established over thirty years ago”.

As for the unlikely scenario of regime change, Yoram Meital, a researcher at Beersheva University, said that “even if the Muslim Brotherhood, who have criticised ‘illegal ties with Israel,’ came to power, the army and the Egyptian security services would oppose it with all their might”.

“Even if the opposition is very hostile to Israel, if they refuse any form of normalisation [with Israel], it is not ready to renounce the ‘cold peace’ between the two countries and take the risk of a new war,” said Meital.

He pointed out that the demonstrations “are to do with social and democratic demands, they are focused on the president himself and do not have anything to do with, or very little to do with, relations with Israel”.

Uri Ben-Joseph, a professor of international relations at Haifa University in the north of Israel, agreed.

“Egypt is not Iran. Even within the Muslim Brotherhood, there is a moderate current that will not take the risk of rejecting the peace agreement,” he told AFP.

Ben-Joseph, an intelligence specialist, said it remained possible that Mubarak and his family would be Sidelined inside Egypt.

But, even in that case, “all the cards would be in the hands of the army, which will continue its security cooperation with Israel against Islamic terrorist groups and against Iran”.