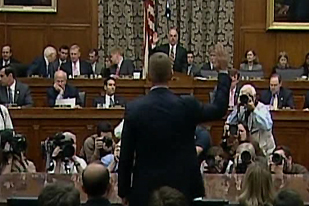 *Xe, the US-based security firm formerly known as Blackwater, is under investigation by the US justice department, for trying to bribe Iraqi officials.

*According to the New York Times, the attempted pay-offs were made in hope of securing contracts after a deadly shooting in 2007, which eventually led to the company’s expulsion.

*The US justice department’s fraud section opened the inquiry late last year to determine whether Blackwater employees violated a federal law banning US corporations from paying bribes to foreign officials.

*The allegation is the latest fallout since the 2007 shooting in Baghdad’s Nisour Square, which involved Backwater security guards and left 17 unarmed Iraqi civilians dead.

*(According to the New York Times, the justice department has obtained two documents from the state department that have raised questions about Blackwater’s efforts to influence Iraqi government officials after the killings.

Former employees at Blackwater have claimed that the firm’s top executives had authorised secret payments of about one million dollars to Iraqi officials.


Only a small portion of the bribes were intended to be compensation for the Nisour Square victims, the New York Times said.

The bribery investigation has been confirmed by three current and former officials speaking on condition of anonymity, the newspaper said.

The move comes shortly after Joe Biden, the US vice-president, announced that the US government will try to reopen dismissed criminal cases against five former Blackwater employees implicated in the Nisour Square massacre.

The guards had been charged with killing 17 unarmed Iraqi civilians and wounding 18 others in September 2007 at the busy Baghdad roundabout using guns and grenades.

They claimed they acted in self-defence after a convoy they were protecting came under attack, but witnesses and victims said the guards shot indiscriminately.

In December, a US court acquitted the men, saying US justice department prosecutors improperly built their case on sworn statements that had been given under a promise of immunity.

Xe pulled out of Iraq in May last year, after the US state department refused to renew its contracts.