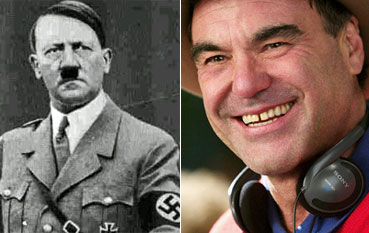 Oliver Stone will attempt to humanize Adolph Hitler in his new, upcoming 10-part documentary series, “The Secret History of the United States,” right?

That’s evidently the plan as reported last week by The Independent. Stone apparently wants to “liberalize” Hitler and to finger U.S. corporations for their role in the rise of National Socialism in Germany in his forthcoming series for Showtime who are showing some remarkable balls for giving the controversial director a platform.

The Huffington Post noted that Stone has called Hitler a “scapegoat,” and said he was for everything that went down in Nazi Germany in the 1930s and ’40s and was “enabled by Western bankers.”

“Hitler is an easy scapegoat throughout history and it’s been used cheaply,” Stone said at TV critics conference in California this weekend. “Stalin has a complete other story. Not to paint him as a hero, but to tell a more factual representation. He fought the German war machine more than any person.”

And apparently Stone’s still at it, telling the press in Bangok today (as part of a lecture to high school students on the role of film in peace-building), “Hitler is a monster. There is no question. I have no empathy for Hitler at all. He was a crazy psychopath,” Stone told reporters in the Thai capital. “But like Frankenstein was a monster, there was a Dr. Frankenstein. He is product of his era.”

Dunno, the controversial filmmaker might be nutty, but his posits aren’t without total merit and this sounds like a potentially fascinating and rabble-rousing documentary. That last quote, a “product of his era” sounds admittedly a very interesting take on the subject matter and most people are obviously not bold enough to go there. Stone having no compunction about looking foolish or tackling controversial subjects is obviously the man for the job. Maybe Stone’s widebrush take on American history will at least be a compelling trainwreck worth tuning into?

Stone has been doc crazy of late. At the aforementioned TV critics conference, he mentioned he has another doc in the can about Venezuelan president Hugo Chavez, called, “South Of The Border” that we assume will never get widespread distribution, but who knows.