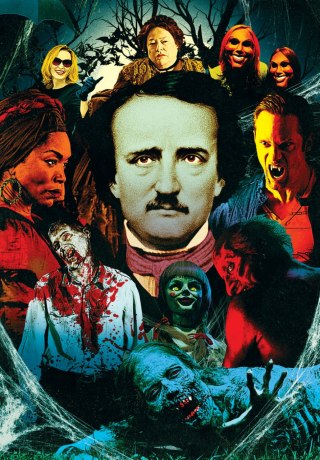 H has grabbed the country by the throat, with the low-budget likes of Paranormal Activity and The Purge regularly breaking into the box-office Top 10, while cable’s highest-rated drama, The Walking Dead, leads a crowded TV lineup of witches, vampires, and other ghoulish fare

Down to the Morgan Library I bat-flew one afternoon to pay homage to Edgar Allan Poe, the martyred saint of literary hacks, tattered soul of Baltimore, and interior decorator of the funeral parlor of American Goth, rich in velvet drapings and “blood-bedewed halls.” As the Morgan Library exhibition, “Edgar Allan Poe: Terror of the Soul,” reminded us, Poe was scorned in his time as a dissolute, disreputable vagabond of letters—a reputation that dogged him in posterity for decades—but his spirit had the last bitter laugh. High-low culture is unimaginable without Poe’s clammy imprint. His fermented brain fathered or advanced nearly every genre that we modern ghouls take for granted: the detective story (“The Murders in the Rue Morgue”), the tale of terror (“The Black Cat,” “The Premature Burial”), the psychological allegory (“The Fall of the House of Usher”), the theater of cruelty now often considered torture porn (“The Pit and the Pendulum”), and cosmological bop (Eureka: A Prose Poem). Others came before and others came after—such as H. P. Lovecraft, who had an immense, depth-charge ripple effect with such visionary upheavals as “The Call of Cthulhu”—but Poe is the tormented godhead from which so much sprang: the inseminator of everything from Val Lewton movies to EC Comics (which are enjoying a posthumous boom in handsome, gruesome reissues), Charles Addams cartoons to French Symbolist poetry, Stephen King novels to the mortician touch and signature mustache of fellow Baltimorean John Waters. Edgar Allan Poe is to the spirit of Halloween what Charles Dickens was to the creation of Christmas as we know it, and Halloween, once mostly a kiddie-costume outing for candy and pranks, has grown into the premier American pagan holiday, an ever mushrooming merchandising bonanza (an estimated $7 billion in sales for 2013) that mirrors how the country has gone completely horror-mad. And not just this country. According to The New York Times, Britain has let the Guy Fawkes mask slip in favor of Halloween full-body leotards, because, as we all know, Brits are weird.

Horror as a boo dispenser used to occupy the novelty store of paperback fiction and B-movie, double-bill, drive-in entertainment, the kitsch department where Vincent Price cultivated his vowels like orchids in one Roger Corman–directed cheapie after another and Abbott and Costello met Frankenstein. Amateur-looking gore-fests such as Blood Feast and Two Thousand Maniacs! seemed to skim the pond scum off the lurid daydreams of an audience waiting for Quentin Tarantino to get cracking. Horror was the hobby shop that broke down the door to the film factory. From Wes Craven’s The Last House on the Left to David Lynch’s Fuseli-ish fever dream Eraserhead to Tobe Hooper’s The Texas Chainsaw Massacre to John Carpenter’s epochal Halloween (which released Alfred Hitchcock’s slasher technique from Psycho into the wilds of teenage hormones) to The Blair Witch Project (which pioneered the night-vision postnasal-drip monologue), horror and suspense have been a low-cost entry point for writers, producers, and directors, and remain so today. In October, New York Times media reporter Brooks Barnes profiled producer Jason Blum, whose company Blumhouse Productions is making a mint on movies that break into the box-office Top 10 like safecrackers, bypassing the red-carpet la-di-da: “Over the last five years, for production costs totaling a mere $27 million, [Blumhouse Productions] has churned out eight hit horror films—including Paranormal Activity, Sinister and The Purge—that have taken in $1.1 billion at the worldwide box office. Insidious: Chapter 2, for instance, cost $5 million to make and last month sold $116.5 million in tickets.” Producer Blum is also pitching to television, where the crypt is getting awfully crowded with witches (Witches of East End, American Horror Story: Coven), vampires (The Vampire Diaries, True Blood, Jonathan Rhys Meyers in Dracula, and, preparing to bust out of the coffin, director Guillermo del Toro’s The Strain), monster/demon slayers (Supernatural, Grimm), lycanthropes (Teen Wolf), serial killers (Dexter, Hannibal, The Following), sensitive mama’s boys learning the hospitality trade (Bates Motel), and, dragging their ravaged skulls and skeletons at a snail’s pace toward the nearest unwilling organ donor, a flash mob of zombies.

Since its debut on AMC, in 2010, The Walking Dead, the top-rated drama on basic cable, has metastasized into the War and Peace of flesh-noshing epics, its use of wide, low horizons and teeming legions endowing it with movie scale, making everything look more consequential. Just as Breaking Bad, also on AMC, modernized Western motifs—the tense meetings in wide-open spaces with the antagonists positioned like Sergio Leone hired guns in dusters, the shoot-outs in parched, deserted patches of bouldered landscape that evoked the Southwest of Anthony Mann, Budd Boetticher, Sam Peckinpah—The Walking Dead in its first episode gave us a lone figure on horseback riding into the necropolis, and, as its story unfolded, harrowing Fort Apache sieges with hordes of bony hands relentlessly clawing in. Queasily enveloping as it is, The Walking Dead doesn’t light up my arcade the way Breaking Bad did, largely because I’ve never found zombies that dramatically interesting a breed of dread-bearers. They’re poor company with deplorable hygiene and manners, lacking basic conversation skills and incapable of appreciating a fine Chianti, unlike your average gentleman vampire or Cher-wigged witch. But there’s no disputing the paramount importance of zombies as postmodern multi-purpose signifiers that can be plugged into any pandemic-disaster scenario and survivalist manual. With their staggering gait and ravenous need to feed, “the mobile deceased”—as Daniel W. Drezner calls them in his provocative study Theories of International Politics and Zombies—conjure images of famine, holocaust, plague, toxic waste, genetic mutation, unburied furies, borderless chaos, racial warfare, urban riots, suburban home invasions, soul-less consumerism (a shopping mall becomes the slaughterhouse in zombie master George Romero’s 1978 Dawn of the Dead), the rampaging march of Marx’s reserve army of unemployed workers in a post-industrial economy, and opaque projections of the Other: a Hieronymus Bosch buffet for the whole family.

The other big bopper in the ratings and social-media mentions is American Horror Story: Coven, a baroque ballroom showcase set in New Orleans that has released an armada of over-the-top divas and Broadway scenery chewers to revel in the roles offemmes de Sade—Kathy Bates, Jessica Lange, Angela Bassett, Christine Ebersole, Sarah Paulson, and guest star Patti LuPone—and whose younger sorority members include Emma Roberts, Gabourey Sidibe, and Taissa Farmiga. Coven may be set in Anne Rice territory (terrortory?), but its violent bravado and erotic transgressions recall the late director Ken Russell riding the rocket of blasphemy in The Devils. (The promotional art for Coven shows three ripe lipsticked mouths sharing a thick white snake, which, I submit to the women and women of the jury, is highly suggestive.) American Horror Story: Coven has a campy cult following, its writing and acting are wicked sharp, but it’s all a bit overbaked and overfrosted for my taste, a wedding cake left out in the sticky rain. It confectionizes evil, for sick kicks. But then, when it comes to impaling and decapitating, I’m rather old-school, and by old-school I mean Joss Whedon’s Buffy the Vampire Slayer and Angel, where horror and humanism weren’t afraid to hold hands.