NO LONGER “CONSPIRATORS”, BUT “TRAITORS”

The EU, NATO, NewsGuard and the Voltaire Network

The propaganda device aimed at stifling dissenting voices has taken a step forward. It is no longer simply a matter of accusing them of committing factual errors or deliberately lying, but of presenting them as traitors in the pay of a foreign power. 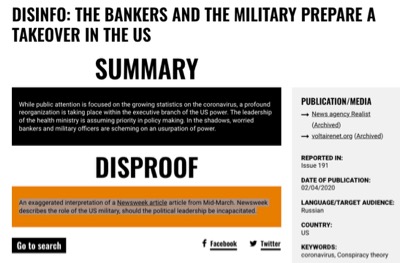 According to this official website of the European Union, the Voltaire Network is a gang of traitors in the pay of Russia charged with defaming the United States army.

The European External Action Service created in 2015 the East StratCom Task Force, a unit tasked with combating disinformation from the Russian secret services. It runs a website, EUvsDisinfo.eu, and sends weekly e-mails to EU journalists to spread its good word. We have already reported that this unit is linked to the NATO Communication Centre in Riga [1].

This unit has just warned journalists of the Union and incidentally all those who subscribed to its newsletter [2] that our article of March 31, “Putchists in the Shadow of the Coronavirus” [3], is Russian disinformation [4].

First, we are outraged to appear on an official site of the Union responsible for listing Russian disinformation – and this is not the first time. We have no connection with the Russian authorities, nor with those of any other country. This is pure defamation.

Secondly, the EU’s rebuttal merely states that our work would be: “An exaggerated interpretation of a Newsweek article from Mid-March. Newsweek describes the role of the US military, should the political leadership be incapacitated”. However, we have quoted part of William Arkin’s article without distorting it and analysing his information in relation to others that are not more contested. It is the perspective of all this data that troubles the EU.

Until now, the public authorities had financed private initiatives to de-credit dissident sources. This is, for example, the function of the Decodex du Monde [5]. It is now a matter of going further and accusing them of treason.

To distinguish between true and false, exercise your critical mind!

NewsGuard, a New York-based company created to evaluate the reliability of websites and make a note on search engines, contacted us asking first what our relations with the Syrian state are, and then what we “think of this criticism”.

On its French site, NewsGuard is careful not to give the names of the members of its Advisory Council, except one, Anders Fogh Rasmussen. Not hesitating to lie, he presents the former NATO Secretary General not as a senior official of the Atlantic Alliance, but of the United Nations.

Under the European Treaties, NATO protects the EU. In other words, the European Union is only the civilian part of a whole in which NATO is the military part.

After several attempts to kidnap or assassinate one of my staff and me in four different countries, we have every reason to believe that it is the Atlantic Alliance that has, on numerous occasions, saturated or even hacked into our website. Our opponents seem to be reverting to non-lethal means: lies and defamation.

War Propaganda is a three-phase process of engaging the public in causes they would normally disapprove of:

The first is to mix the false with the true while accusing those who tell the truth of being wrong or lying (fake news).

The second is to dismiss all dissenting speeches and thus create an appearance of unanimity around the doctored truth. At this point, the dissidents are no longer hullabaloo-mongering storytellers, but become traitors.

The third one to push the targets to practice symbolic acts of acquiescence to the new ideology.

A step has just been taken.