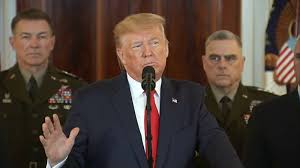 HOW TRUMP REBELLED AGAINST THE GENERALS 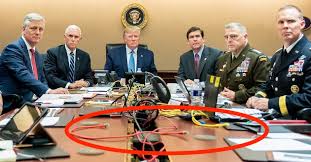 In early 2017, just as Trump was inaugurated, we wrote how of an old power center theory that seemed to explain how Trump won the elections:

Seen from the perspective of power centers Clinton once had all the support she needed. But she then lost a decisive group due to her uncompromising neo-conned foreign policy. Here is an interesting take based on a theory from the 1950s:

[T]he power elite can be best described as a “triangle of power,” linking the corporate, executive government, and military factions: “There is a political economy numerously linked with military order and decision. This triangle of power is now a structural fact, and it is the key to any understanding of the higher circles in America today.”The 2016 US election, like all other US elections, featured a gallery of pre-selected candidates that represented the three factions and their interests within the power elite. The 2016 US election, however, was vastly different from previous elections. As the election dragged on the power elite became bitterly divided, with the majority supporting Hilary Clinton, the candidate pre-selected by the political and corporate factions, while the military faction rallied around their choice of Donald Trump.

…The decisive political point in this election round was the fight between neo-conservatives/liberal-interventionists and foreign policy realists. One side is represented exemplary by the CIA with the U.S. military on the other:

A schism developed between the Defense Department and the highly politicized CIA. This schism, which can be attributed to the corporate-deep-state’s covert foreign policy, traces back to the CIA orchestrated “color revolutions” that had swept the Middle East and North Africa.

The CIA created bloodthirsty future enemies the military will later have to defeat. …

That explanation has held up well. At the beginning of his regime Trump stuffed the White House with the military faction while the executive government -the deep state- wage a war against him. The corporate side of triangle of power was quite happy with his tax policies.

But Trump soon discovered that the military faction did not concur with his ‘America first’ isolationist tendencies. The ‘grown ups’ and generals wanted to explain to Trump why they believe that the U.S. needs many allies and bases and why the many long wars the U.S. fights are sensible policy.

According to a new book, partly adapted in a Washington Post piece, that effort did not end well:

Trump organized his unorthodox worldview under the simplistic banner of “America First,” but [Secretary of Defense Jim] Mattis, [Secretary of State Rex] Tillerson, and [Director of the National Economic Council Gary] Cohn feared his proposals were rash, barely considered, and a danger to America’s superpower standing. They also felt that many of Trump’s impulsive ideas stemmed from his lack of familiarity with U.S. history and, even, where countries were located. To have a useful discussion with him, the trio agreed, they had to create a basic knowledge, a shared language.So on July 20, 2017, Mattis invited Trump to the Tank for what he, Tillerson, and Cohn had carefully organized as a tailored tutorial.

The meeting in the Tank, a secure conference room in the Pentagon, were part of an effort to subdued Trump’s insurgency against the top military’s world view. and the presentation by top generals came off as a lecture which Trump immediately disliked:

An opening line flashed on the screen, setting the tone: “The post-war international rules-based order is the greatest gift of the greatest generation.” Mattis then gave a 20-minute briefing on the power of the NATO alliance to stabilize Europe and keep the United States safe. Bannon thought to himself, “Not good. Trump is not going to like that one bit.” The internationalist language Mattis was using was a trigger for Trump.“Oh, baby, this is going to be f—ing wild,” [White House chief strategist Stephen K.] Bannon thought. “If you stood up and threatened to shoot [Trump], he couldn’t say ‘postwar rules-based international order.’ It’s just not the way he thinks.”

Bannon was right. Verbal scuffles about NATO, South Korea and U.S. bases followed. Then Trump took on the generals:

“We are owed money you haven’t been collecting!” Trump told them. “You would totally go bankrupt if you had to run your own business.”

The discussion turned to the war on Afghanistan:

Trump erupted to revive another frequent complaint: the war in Afghanistan, which was now America’s longest war. He demanded an explanation for why the United States hadn’t won in Afghanistan yet, now 16 years after the nation began fighting there in the wake of the 9/11 terrorist attacks. Trump unleashed his disdain, calling Afghanistan a “loser war.” That phrase hung in the air and disgusted not only the military leaders at the table but also the men and women in uniform sitting along the back wall behind their principals. They all were sworn to obey their commander in chief’s commands, and here he was calling the war they had been fighting a loser war.

“You’re all losers,” Trump said. “You don’t know how to win anymore.”

When one reads the recent Congress testimony of the Special Inspector General for Afghanistanone can see that Trump has a point. The war is long lost and the military is lying about it:

“There’s an odor of mendacity throughout the Afghanistan issue .?.?. mendacity and hubris,” John F. Sopko said in testimony before the House Foreign Affairs Committee. “The problem is there is a disincentive, really, to tell the truth. We have created an incentive to almost require people to lie.”
…
“When we talk about mendacity, when we talk about lying, it’s not just lying about a particular program. It’s lying by omissions,” he said. “It turns out that everything that is bad news has been classified for the last few years.”

Trump’s rant during the meeting with the generals continued:

Trump mused about removing General John Nicholson, the U.S. commander in charge of troops in Afghanistan. “I don’t think he knows how to win,” the president said, impugning Nicholson, who was not present at the meeting.
…
“I want to win,” he said. “We don’t win any wars anymore .?.?. We spend $7 trillion, everybody else got the oil and we’re not winning anymore.”
…
“I wouldn’t go to war with you people,” Trump told the assembled brass.Addressing the room, the commander in chief barked, “You’re a bunch of dopes and babies.” 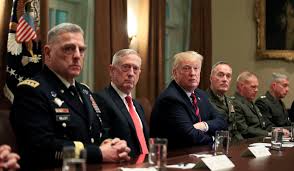 A drill sergeant act performed on recruits with four stars on their shoulders. I find that quite impressive. Those perfumed princes must have fumed.

While some will certainly say that Trump disgraced the military with his rant most of the soldiers in the field will likely agree with his opinion about their generals.

Most of the ‘dopes and babies’ who were in that room have since been fired or retired. Their replacements are yes-men more to Trump’s liking. They did not even protest about Trump’s latest blunder. He rented out scarce air defense units to Saudi Arabia and went on to murder Qassem Soleimani in Iraq while the U.S. bases there no longer had air defenses to protect them against the inevitable retaliation.

The anti-Trump leaders of the executive side of the triangle have likewise been removed and replaced with people who are unlikely to put up a fight against Trump.

The third side of the triangle, the corporate faction, is happy that Trump pressed the Fed to douse the markets with free money. Unless the inevitable stock market crash comes before the election, which is unlikely, they will stick to Trump’s side.

With all three sides of the triangle of power inclined o favor him or neutralized Trump seems to have a good chance to win the next election.

That is unless he continues to follow the advice of neocons with a bad record and starts by shear stupidity a war against Iran.