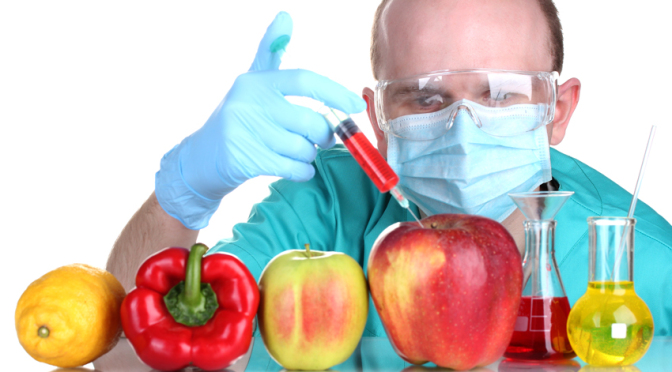 The debate over GMO safety and risks stems from the fact that the definition is too generalized, or too ambiguous. The mainstream conversation about its pseudo-science always favors the corporations behind it.

But mere scientific definition is not enough to circumvent the actual disastrous experience, i.e. those glaring facts about its negative effects outside the GMO laboratories.

The long term side effects of consuming genetically modified, processed, or preserved, foods are beginning to unravel. The corporations have billions of reasons not to publicize its methods and why they are moving heaven and hell not to label GMO products.

Whatever you do, don’t ever gamble with the food you eat unless you can afford to pay for your expensive medications later on.

Here are the real scientific reasons why GMO foods are extremely dangerous, and how scientists around the world are being coerced to toe the biotech establishment’s line.

Up to now we are still very skeptical if the reported removal of GMO ingredients from Kraft products is real, or mere publicity stunt.

Orange you glad you didn’t notice.

Kraft altered its beloved formula for the Day-Glo sheen of its popular Macaroni & Cheese earlier this year — but now the company is rolling out a big bucks ad campaign to tell people.

It’s not as if it were a secret. Kraft announced nearly a year ago it was going to make this change. It started shipping the new recipe in December and has already sold over 50 million boxes.

Its new commercial features Craig Kilborn standing in a supermarket.

The problem with this claim is that no independent consumer group is certifying that such is the case. Another known fact to remind ourselves is the inherent chemical contamination right at the production lines itself.

If ordinary tampons, or gauze, can be contaminated with glyphosate during production [here], why not food products which were subjected to artificial fertilizers and pesticides from growing to packaging?

Nitrates increase the risk of blue baby syndrome, according to the recent study. The illness replaces a child’s hemoglobin with methemoglobin, which minimizes the ability of blood to carry oxygen throughout the body. Infants are most often affected by the malady, which is marked by a blueness around the mouth. Other symptoms include difficulties breathing, vomiting and diarrhea. In extreme cases, blue baby syndrome can be fatal.

There are so many concerned groups that have taken the cudgels of bringing down abusive food corporations for decades now. Yet, the fight to end these abuses has not achieved its intended outcome.

Then came a covert global effort to neutralize the single crime syndicate that’s been doing all the evils in our society today.

The information we received after the events in 2001 said that there is a global movement to take down the “tightly knit, highly efficient machine that combines military, diplomatic, intelligence, economic, scientific and political operations,” that sought to depopulate and control the world for its own caprices.

This Reformist Collective, the most visible manifestation of which is the BRICS, is said to be employing both hard and soft power to achieve its aims of creating a world of mutual progress by allowing the full and responsible use of suppressed technologies to eliminate scarcity and institute abundance for all, and end all types of geopolitical conflicts.

There is now a growing body of evidence that the genocidal group of the Bushes, Rockefellers, Gates, etc. are being systematically neutralized, i.e. their attempts to start a nuclear war with Iran has been suppressed.

The Rothschild banking dynasty, along with the UK Monarchy and Vatican, are said to have no other choice but cooperate with this group after the Global Collateral Accounts, the massive tranche of historical gold lent by Asian royalties to back up the entire financial system for the last 100 years or so, were frozen prompting the massive resignations of CEO bankers around the globe in 2012.

This bankers’ resignations were punctuated by the resignation of the World Bank president and Vatican Pope Benedict XVI in 2013.

Part of the global reform is to bring down Monsanto, the acknowledged rogue player in the realm of genetically modified food production, of which mass vaccinations advocate Bill Gates is a major stockholder.

Those who have chosen the path to peaceful resolution and have since cooperated with the BRICS and will be paid for handsomely.

Early in February of this year, ChemChina frustrated Monsanto’s attempt to buy off Swiss Syngenta through a $43 billion offer. While western media is saying that China is just trying to feed its more than a billion mouths, we believe there is a much profound objective for the acquisition, among many acquisitions.

… The company is also looking to expand its presence in the domestic market. A merger with Syngenta would turn ChemChina into the country’s top pesticide company. This is no small undertaking, given that China is the world’s third largest pesticide market, after the US and Brazil. If foreign agrochemical companies were to be interested in investing in China’s vast market they would find themselves squeezed into a minor corner by a gigantic Syngenta-ChemChina combination.

ChemChina’s ambitions are part of a larger story. Chinese food and agriculture companies are moving abroad and starting to compete toe to toe with their Western counterparts and even buying them out. In 2013, China’s Shuanghui corporation bought Smithfield, the leading US pork company, for $7.1 billion, the largest ever purchase of a US company by Chinese investors.

Another Chinese company to watch is COFCO, the country’s leading food processor, which acquired a controlling stake in the Netherlands’ agricultural commodity trader Nidera. The majority stake in Nidera would give COFCO greater control over pricing and better access to Latin America and Russia, important grain-growing regions, the Wall Street Journal reported in 2014.

Once the deal is fully consummated, China could dictate where Western companies should proceed from hereon.

Will China continue the regressive direction of the food industry? Or, will it force the positive enhancements of food production drawing the lessons learned at l Loess Plateau, Central China?

It is estimated that even if only 10% of the population of the earth will do permaculture, it’s enough to feed the entire population.

Of course, we can always question China’s real motives, but judging from how the decades of Western control of Africa induces famine, hunger and endless ethnic conflicts, one needs to see only how Ethiopia achieved 11% economic growth after they have allowed China to participate in their economy.

While it’s true that China has been investing billions in Africa in exchange for access to its rich natural resources, it’s also true that the West has been plundering Africa’s resources for centuries just to satisfy its military industrial complex.

In deep contrast and in addition to China’s acquisition of Syngenta, it is also planning to create the largest solar power farm grid around the planet.

China’s $50 Trillion Global Clean Energy Project Muted by Panama Papers
How then can we participate in the global effort to defeat the regressive group responsible for our collective misery and moral degradation?

We Need to Step Back

Humanity has reached the apex of its own capacity to inflict pain on itself.

Scientific advancements are all being used to manufacture great weapons of war; genetic engineering is being exploited to create plant and animal species only to increase production and profits rather than make people healthy, drugs and medicines are designed to make people sick, and the school system and mass media are making the people dumber.

The frequency and number of colorful protests against corporate abuses in the realm of education, food production and healthcare, banking and finance, are breaking previous records yet the benefits gained from these mass actions are disproportionately useless.

Corporations will just change the name of their products to circumvent the unfavorable regulations.

In order to make changes happen, we must understand how we arrived here.

First, we have been lured to come to the poorly designed cities where we could not grow our own organic food, and where we need to work in order to have access to the most resources basic for human survival.

Then, they supply us with industrialized processed food, neurotoxic vaccines and chemical drugs, where safer organic competitions from the countryside are deliberately stifled through the use of the police.

Consumerism has made us too vulnerable for totalitarian control later on.

The physical and psychological stresses of home mortgage and junk foods defeat the conveniences of city living. In fact, we cannot afford to describe it as living anymore, but merely surviving.

We can’t go on with this same regressive trajectory. We cannot redesign our cities while most of us are still inside any of them.

We need to step back. We need to go back to the countryside and start growing our own food organically. We need to remove the power we’ve given them.

While building our organic permacultured farms, we must take all the bad urban experiences into consideration, and take the necessary measures to avoid them.

By doing so, we will be empowering ourselves, and that’s how we regain our long lost freedoms.

Aside from the fiat monetary scam and bloodsoaked petrodollar, another significant source of funds for the Nazionist Khazarian Mafia is the “healthcare” industry which registered a whopping $3.09 trillion in 2014, and is projected to soar to $3.57 trillion in 2017, in the US alone. We believe that this is just a conservative figure.

We can avoid using drugs, defeat any viral attack and scaremongering, like the Zika virus, easily by knowing how to build our own comprehensive antiviral system. Find more about it here.