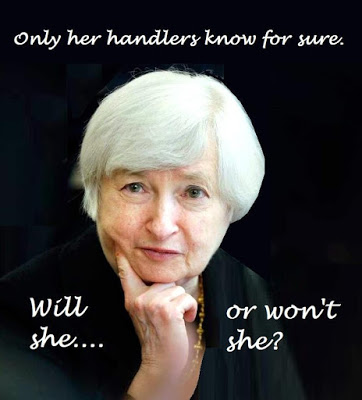 This whole spectacle of the health of the global economy pirouetting on the decision of an American Banker, or perhaps more properly, the Viceroy of Wall Street, on whether to symbolically raise a benchmark interest rate, tied to an avalanche of internationally distributed paper claim checks for conceptual ephemera and political promises, must be one of the oddest things that we have come to take for granted in our modern society today. Even moreso than the atavistic significance of the merely human, in an age when soulless, corporate behemoths freely roam across the land and the seas.

At the height of the British Empire, it is not clear that even the dowager Queen Victoria held that sort of whimsical power. This sort of individual discretion is more reminiscent of the barbarity of former ages, of pharaonic Egypt, of the Mongol hordes, or of the cults of the dark gods that fed on beating hearts torn from human sacrifices.

Such is the power of the modern religion of the markets, and with those who would displace God to make way for the overheated imaginings of their restless wills and fancies.

Future generation must surely think that we are mad.

This story of how bankers with help from the members of Wall Street’s Opacity Protection Team (this includes politicians, economists, think-tanks, rating firms, investment charter constrained asset managers and the financial regulators) undermined the global financial system by reintroducing opacity.

The result of reintroducing opacity was the worse financial crisis since the Great Depression and the slowest economic recovery.   Bankers of Wall Street and the City of London creating and maintaining a veil of opacity to hide behind as they rig the global financial markets for their benefit.

Their bad behavior isn’t constrained to simply misrepresenting financial products like toxic subprime mortgage-backed securities, but includes rigging the global interest rate, foreign exchange, commodity and equity markets so the bankers’ bets pay off. The bankers’ bad behavior affects everyone. Whether you are buying electricity or a house or you are investing in your pension plan, opacity lets the bankers take money from you that they are not entitled to.

In addition to misrepresenting securities and rigging the global financial markets for their benefit, the veil of opacity also allowed bankers to manipulate the response to the financial crisis that began on August 9, 2007. They used it to sell the idea banks should be bailed out using taxpayer money for fear financial contagion would trigger a second Great Depression.

Naturally, part of bailing out the banks was not holding the bankers accountable for their misbehavior or stopping their looting.

Wall Street and the City of London bankers reintroduced opacity and cynically fight any legislative or regulatory attempt to restore or retain transparency in the financial system.