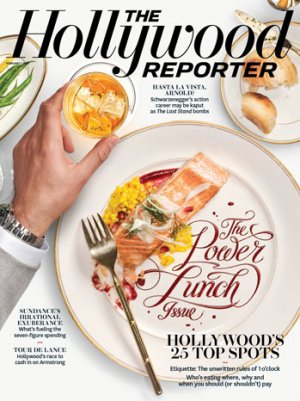 News Flash: The Power Lunch — where deals are made, influence is peddled and relationships are forged — is alive and swell. That might be surprising, given a decade that saw the midday meal leveled by corporate downsizing, rocked by the recession and undermined by an increasingly digital mind-set that often regards a constant email rapport as equivalent to getting to know one another in person. “There’s something about being in person that makes all the difference,” says Millennium Films president Mark Gill. “In-person alleviates a lot of fears, especially when you are talking someone into doing a movie.”

Back in the day, lunch meant Ma Maison, Orso and Morton’s as well as still-kicking heavyweights The Polo Lounge, Spago and the Grill on the Alley. The business was different then. People needed to see one another because players drove decisions by passion and instinct in a way that now, in an age of cold bean-counting, seems by turns heroic and quaint. As one senior TV exec observes: “Business used to be done by force of personality. And force of personality isn’t enough anymore.” Adds producer Lynda Obst: “The song-and-dance is dead. These days, it’s all quantifiers — attachments and numbers.”

Indeed, for many in this town, lunch now often is something you want to do rather than something you feel beholden to do. “It’s a more ceremonial meal,” says Electus chairman Ben Silverman. “You tend to be having it with somebody you are already in business with or truly do want to know better.” Sundance Channel GM and exec vp Sarah Barnett notes there’s something “sentimentally appealing” to lunching these days, with so much interaction taking place virtually. “I think it may not be that the deals are done at lunch, but it sure helps get them done,” she says.

To inaugurate its first-ever Power Lunch Issue, THR editors surveyed more than 100 of the most influential names in the entertainment business. An elite list of CEOs, A-list producers and top agents, managers and lawyers gave their candid takes on where power congregates today and why the midday meal remains important, with its victory laps around the dining room after a big box-office weekend and constant jockeying for status-conferring tables. If Hollywood is, indeed, much like high school, these restaurants constitute its collective cafeteria — anxiety ever-present, the threat of breaching innumerable unspoken rules of etiquette perpetually looming.

Lunch has lost many of its indulgences. Iced tea is the new martini. Just about everyone’s on a special diet, regardless of whether the intent is to lose weight. It’s rare to find people tarrying at their tables beyond an hour and a half. And folks are generally more conscious of cost. Notes producer Keri Selig: “It used to be, ‘Oh, I’ll take it!’ ‘No, I’ll take it!’ Now a lot of people put their credit cards down and share. And people seem to be a little more open to meeting at a different grade of place. You can be more neighbor hoody. You can do M Cafe or Cafe Gratitude.”

Many of those who’ve been in the game the longest believe that breaking bread might just be its most benevolent ritual. Explains producer Steve Tisch: “It’s fun! This business used to be a lot more fun, and part of that was enjoying each other’s company.” Phil Rosenthal, who named his production company Where’s Lunch and has invested in Bouchon, agrees: “It’s a bright spot in your day. Have some pleasure. Otherwise, why are we here?”