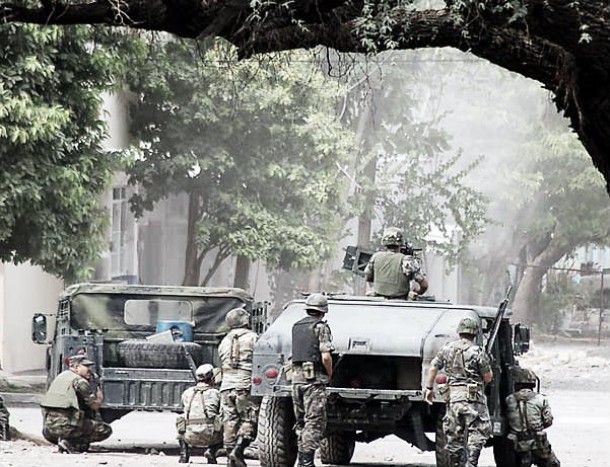 Since the death of Italian anti-Mafia magistrate Giovanni Falcone 20 years ago, how much has organized crime spread internationally? The trans-continental dimensions of the Sicilian Mafia, Cosa Nostra, was already clear to the legendary prosecutor in 1980 when he took up the “Pizza Connection” case against Salvatore Inzerillo and the boss of the Gambino familiy in New York.

But in the last 25 years, the criminal world has changed radically.

When Falcone first became an investigating judge in 1964, drug use in Italy was virtually non-existent, and even the U.S. market was still limited. Italy was just a passage way: morphine was bought by the Sicilians in producing countries, like Turkey and Lebanon, who then moved it from Sicily to Marseille, France where it was refined. It then came back to Sicily before it was sent off to the US.

The Sicilian mafiosi could count on proven relationships with their fellow American “godfathers,” but they didn’t have any solid contact with their producers. So, an emissary was sent to the Middle East to test the drugs, and often pay in advance. This sleepy world of trafficking, with only occasional misunderstandings and seizures by the police, was bound to end when the demand for drugs in the U.S. grew exponentially.

At first, the Sicilian-American network was largely centered around the Inzerillo and Gambino families, and was in the best position to take advantage of the financial opportunity. So the Sicilians began to import drugs into the States at a rate of $600 million per year.

Antonio Calderone, a mob boss who turned state witness, told Falcone “(the Mafia) all became millionaires. Suddenly, just in a few years. All thanks to drugs.” The trafficking revenues were then reinvested by Inzerillo’s son-in-law, Rosario Spatola, in Palermo, which was run by Vito Ciancimino. During those years in the capital of Sicily, drug money ran everything.

The Sicilian Mafia continued to play a key role in the drug trade into the early 1980’s; when they arrived in the States approximately 80 percent of heroin was consumed in the northeast of the country. The center of this distribution system was “Al Dente”- a pizzeria in Queens that is still open today but with new management. The Sicilians oversaw the importation of the tons of narcotics on American soil, up to the point when the American “Dons” began to fear their Italian cousins who had now set up shop on the East Coast and “wanted to control everything” as recalled by Joseph Pistone (Donnie Brasco), the FBI agent who infiltrated the Bonanno family.

At the height of the Sicilian power, they still hadn’t come to terms with the fact that there were some very determined investigators such as Falcone, future FBI chief Louis Freeh and future New York City Mayor Rudolph Giuliani. It was the Sicilican investigators who discovered the connection between the drugs being sent at the same time the payments came into the offices of the Swiss Banks in Zurich and Bern.

The reign of the Sicilians, who were slowed down by Falcone’s investigations and arrests, was over rather fast. Very soon the Italian-American Mafia lost the heroin market and they never managed to get into cocaine. Since the mid-1970s, heroin entered the U.S. from Mexico as well as from the West Coast thanks to Chinese and Vietnamese entrepreneurs, and it came to New York without any mafiosi being able to prevent its distribution.

When the Pizza Connection trial ended in 1987, the route that went from Sicily to the port of New York dried up. Compared to the Sicilians, the Asian importers of heroin, cocaine, as well as the Colombians, had a strategic advantage: they could rely on their direct relationships with manufacturers and with their fellow compatriots, who were growing in numbers in the U.S.

At that point in the fight against drugs, the U.S. focused on Colombia and began a dirty war against the traffickers. The effect of the defeat of the Colombian cartels and the closing of the Caribbean route that brought cocaine through Florida would end up deepening the problem.

By the end of the 20th century, the Mexicans become the leading distributors of cocaine in the States. Nearly 50,000 people have been killed since 2006 in Mexico, victims of a merciless war for the control of drug passageways. The end of the Italian reign on drug trafficking in the U.S. had the paradoxical effect of raising the supply and a reducing the price. The current situation is one of unbridled competition, without any rules.

The Calabrian mafia, the ‘Ndrangheta, had become strong in Italy and wanted to pick up where Sicily’s Cosa Nostra had left off. Drugs arrive today from Latin America in the port of Gioia Tauro in Calabria, and distributed northward through the rest of Europe by members and affiliates of ‘Ndranghete.

Indeed an Italian investigation, coordinated by the prosecutor Salvatore Curcio, demonstrated how the Colombian drug lords and Calabrian mob had developed a sophisticated situation for cargo insurance: an exchange of hostages to remedy the problem of lack of mutual trust. For a “modest sum” the mafiosi importers could insure the cargo. As done in the middle ages to seal international allies, often the intermediates would live under armed house arrest until the transaction was completed.

One exceptional event that changed the way that global organized crime works in the last 25 years was the collapse of the Soviet Union. The departure of the Red Army from Afghanistan in 1989 allowed it to become the world’s largest producer of heroin. The democratisation of Burma could have the same effect, leading to the potential increase in the production of heroin and amphetamine in the “Golden Triangle”: Burma, Vietnam and Laos. Today, the drugs produced in Burma supply the ever growing Chinese market. As ever, rampant crime and economic development go hand in hand.

Not only did the fall of the USSR have a huge effect on world drug trafficking, it led to the emergence of the Russian mafia, which dominates many important aspects of daily life of both the post-Soviet state as well as crime networks in other countries too. For example, during the late 1990’s, the most powerful mafia group that emerged from the ashes of the Soviet Union was the Solntsevskaya Bratva from Moscow, who counted on a boss in Rome to coordinate the Russian operations in Italy. In addition to the lack of cooperation from Russian police during investigations, the most shocking aspect that emerged from a survey conducted on Italian police for this story was how the role of the banks facilitated the transfer of dirty money. Respectable Western bankers gave Russian mob bosses useful tips on how to transfer the money in a legal way from Russia to the rest of Europe.

The geopolitical landscape and the world map of organized crime have profoundly changed, but financial institutions continue to be a central element of Mafia life, as Falcone knew years ago. The only difference is in the extent of the phenomenon: two years ago the head the United Nation’s Office on Drugs and Crime said that important elements of the global banking system survived the 2008 crisis because they accepted the cash that had come from the mob: $352 billion from the drug trade have has entered the legal financial system in a short time.

The intertwining of the banking system, organized crime and state bureaucracy are characteristic of our lifetime. What can be done? A lesson of Falcone that is often overlooked is as relevant as ever. Weakness, corruption and inefficiency of democratic institutions allow the mafia to become alternative authorities in their own territories, that can eventually expand elsewhere and successfully participate in complex overseas trafficking. Falcone wrote that “The mafia is not invincible,” but this is battle that cannot be won by a small group of judges alone.