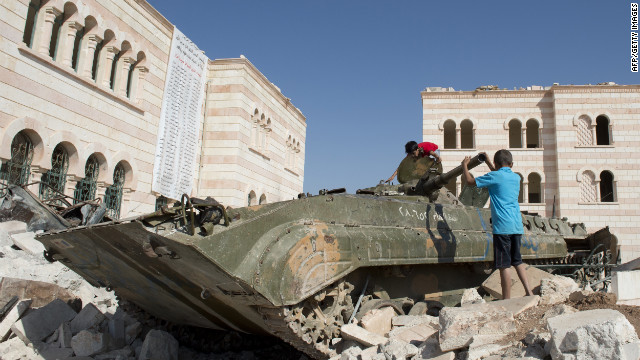 As Syria continues its descent into civil war, the terrible humanitarian tragedy occurring is unfolding in plain view: 20,000 dead, 250,000 refugees outside the country by some accounts, over a million people internally displaced.

There seems no easy solution to end the crisis. But now, Syria’s neighbors are getting worried. Syria’s problems will not stay confined to Syria. Syria is a multi-sectarian society with shared identities with groups in other countries. As a result, the sectarian tensions that are being unleashed there are also spilling over from Syria’s borders.

Collectively, from the Kurdish point of view, this would fulfill a long held aspiration dating back decades, if not centuries, to create some kind of Kurdish community or state gathering together the Kurds of the Middle East. For those other countries involved, of course, it creates an enormous problem by exacerbating the separatist tendencies within each country’s borders. In effect, it creates safe havens for certain kinds of insurgent activities or anti-state activities and allows for the flourishing of sub-national identities. After all, Kurds in Iraq really don’t think of themselves as part of the Iraqi state – they have Kurdish passports, they speak Kurdish and the armed Kurdish fighters, the Peshmerga, are essentially the Kurdish national army.

All this is going to produce tremendous strains on the entire regional system. Joe Klein had a very good column in TIME in which he pointed out that to understand the big picture here, we need to remember that the states in the Middle East have very artificial borders. These borders were created for the most part at the end of World War I, and were carved out largely by the British and French. In almost no cases do they conform to natural borders – mountains, rivers and valleys – that have been the way nations have usually been formed through history. By some accounts, the only two natural countries in the Middle East are Iran and Egypt. (One might add Turkey, though it is not wholly Middle Eastern.)

Instead, borders in the Middle East were often formed by deliberately cobbling together separate groups that in the case of Britain allowed it to rule over these countries in the full knowledge that there was no one dominant group that would be able to drive them out. Iraq is thus made up of Sunnis, Shiites and Kurds, who often place their sectarian identity above a national identity.

The unfolding violence in Syria is tugging at this fragile state system. So, could Syria’s neighbors come to recognize that civil war in Syria is not simply an internal affair, but something likely ultimately to undermine the entire state system of the Middle East? If Syria’s neighbors do indeed recognize this, you would expect to see Saudi Arabia and Egypt on the one hand, and Iran on the other trying to find ways to rein in the violence. And there have been moves to form a “contact group” of those four powers to meet. Iran has been eager to join in but so far Saudi Arabia has refused to sit down with the Iranians.

When all is said and done, however, it’s difficult to see how any progress towards a new political order will occur with Bashar al-Assad remaining as Syria’s president. So the first step would have to be for the Iranians to recognize the inevitable and call on al-Assad to leave office.

Sadly, when I asked President Ahmadinejad about this very matter last week, his answer was not encouraging.