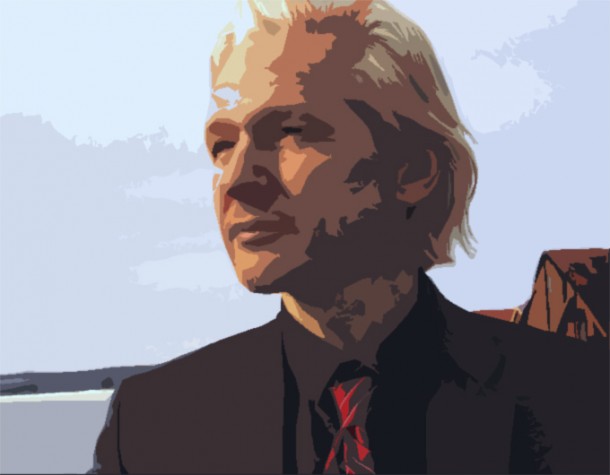 As always, whenever the government of Ecuador calls an official press conference, mostly only journalists close to the government are invited. The great majority of Ecuadorian independent media is left up to its own devices as to how to get a hold on whatever information was imparted at the conference.

Patiño justified the decision by saying that “asylum is a fundamental human right.” Ecuador is thus offering Assange a new political home. The Australian sent thanks via Twitter in Spanish a few minutes after the announcement, saying: “Thanks to Ecuador, thanks to everybody.”

Tension had been growing in Ecuador for days before the announcement. It was unclear which way the Correa government would go. On the eve of the press conference, angry demonstrators assembled in front of the British Embassy in Ecuador’s capital, Quito. They bore signs reading “We’re not a colony anymore” and “Respect our sovereignty.”

The Assange issue has been the cause of a diplomatic crisis between Ecuador and Great Britain for a while now. Ecuador interprets the British assertions that it will deny Assange safe conduct from the Ecuadorian Embassy as an attack on their sovereignty and the extraterritorial status of its diplomatic outpost in the British capital.

The president of Ecuador’s National Assembly, Fernando Cordero, called an extraordinary meeting on Thursday evening at which the only item on the agenda was the crisis between Quito and London.

The mother and the “tyrant hunter”

Christine Assange, the mother of the controversial Australian Internet activist, had for days been having behind-the-scenes meetings in Ecuador, “to protect my son’s life.”

She had previously expressed her fear that her son would be turned over to American authorities by saying: “When they do what they did [to allegedly tortured Bradley Manning] to one of their own citizens they’ll have even fewer scruples doing it to a foreigner.”

Manning, a former member of the Army, sent confidential information to WikiLeaks and was as a consequence placed in isolation and under heightened security by U.S. authorities. Human rights organizations have been sharply critical of the U.S. handling of Manning.

Assange’s choice of lawyer had already caused quite a media stir. The well-known Spanish jurist Baltasar Garzon, known as the “tyrant hunter,” is representing the Australian.

Fourteen years ago, the Spaniard issued an international warrant for the arrest of former Chilean dictator Augusto Pinochet.

For Ecuador’s president Rafael Correa, the Assange case is an ideal opportunity to clear his reputation as an anti-media government head. For months, he was in a legal war with the independent daily El Universo newspaper, one of whose editors had questioned the President’s version of events during a police uprising two years ago. Correa reacted with an iron fist, and sued the paper for millions. The owners were looking at possible bankruptcy, and the editor in question – who has since fled to Miami – a long prison sentence.

At the height of the crisis a few weeks ago, the newspaper’s office manager, Monica Almeida, said: “We have a president with a very, very determined character. The President views the media as his political enemies.” The World Association of Newspapers and News Publishers (WAN-IFRA) sent a message directly to Correa saying: “We demand an end to state attempts at intimidation.”

In the end, Correa “forgave” the newspaper, an act that speaks volumes about his relationship to a free press. And it wasn’t the first time that Correa had made his full weight felt by local media.

Correa is presenting himself as a kind of patron saint to the Internet activist. Foreign Minister Patiño stressed that Assange’s website, WikiLeaks, made important information available to the general public, and that this was one of the factors that had played in Assange’s favor when the asylum question was reviewed. But the decision makes something else crystal clear: the influence of Europe and the United States in Latin America has sunk to its lowest level: both countries had been hoping that Assange would be turned over.

Overwhelmingly leftist-governed South America openly defies Washington and London and no longer allows decisions be dictated to it. The heavy-handed, sneaky way the U.S. directed things for years in South America is now backfiring.

Great Britain doesn’t have a lot of friends on the continent either. Correa had always been critical of the hard British stance in the conflict with Argentina over the Falkland Islands. He recently stayed away from the Summit of the Americas in Cartagena, Colombia, because he did not agree with the refusal of the U.S. and Canada to discuss the Cuba embargo and the Falkland Islands…