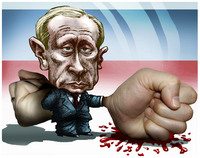 The history of authoritarian rule in Russia displays a certain depressing regularity. Such regimes rarely perish from external shocks or position pressure. As a rule, they die unexpectedly from some internal disease – from irresistible existential disgust at themselves, from their own exhaustion.

Czarist rule withstood many harsh tests during its long history: peasant revolts, conspiracies, and the alienation of the educated class. In January 1917, from his Swiss exile, Lenin noted with bitterness and hopelessness that: “We, the old, will hardly live till the decisive battles of that forthcoming revolution. But…the young maybe will be lucky not only to fight, but finally win in the approaching proletarian revolution.” By the following March, however, Czar Nicolas II was forced to abdicate.

General Secretary Yuri Andropov died in 1984, leaving behind a country cleansed of dissidents. But when in several years one of his former regional First Secretaries, Boris Yeltsin that is, signed a decree banning the Communist Party none of 18 million party members went to the streets to protest.

Today, before our very eyes, Vladimir Putin’s once seemingly impregnable regime may be fading in the same way as its predecessors. In just ten years, Putinism, which was consciously designed by its image-makers as a simulacrum of a great ideological style has run through all the classical stages of Soviet history. Indeed, Putinism now seems like a trite parody of all of them.

First comes the creation of a formative myth for the new system, one that generates a demiurge-hero, the nation’s father. Where the Bolsheviks had the October Revolution and the subsequent civil war to deify Lenin, Putinists used the second Chechen war, triggered by blowing up of Moscow apartments, to raise up Vladimir Putin as national saviour.

The second stage is the time of the tempest – the period when the country is stoically remade through the leaders’s iron will. Where Stalin had his barbarous yet monumental drive to industrial modernization, Putin boasted of making Russia a great energy power.

Next comes heroic triumph. The Soviets had the great victory over Hitler’s Germany in World War II, which left Russia one of the world’s two superpowers. Putin’s supposedly heroic victory came in the war with Georgia of 2008, followed by the subsequent virtual annexation of Abkhazia and South Ossetia.

From heroic victory, however, exhaustion invariably follows. Under the Soviets, this stage lasted about 40 years. But Putin’s simulacrum of Sovietism began to collapse much faster, partly by virtue of the fact that his regime’s ideology never had much substance to begin with, and so couldn’t begin to be used as a prop.

Indeed, at the onset of the financial crisis, Putin tried to bestride the world, portraying Russia as an island of stability and demanding the creation of a new global financial order, with the rouble to become one of the world’s reserve currencies. But that megalomaniac position was quickly reversed. Putinomics, however, proved to be even more vulnerable to the financial crisis than the economies of the West.

At such moments of decline in Russia, the clans always come to the fore in a mad scramble of self-preservation and self-enrichment. Even Putin’s truest followers are now beginning to speak of their leader and the results of his governance in impertinent and disrespectful ways.

Of course, no one should think that Putinism will disappear tomorrow, even though its jackals are already circling. Let us remember that Soviet communism took four decades to rot away – decades during which the inner circle knew that the regime was disintegrating from within but lacked any real idea of how to save it.

So now we hear pathetic echoes of all the reform communist efforts of the long years of Soviet decline: Putinism without Putin, Putinism with a human face, etc. There is much talk of great leaps forward, of modernization, innovations and nanotechnologies – the sort of myths with which fading rulers console themselves as they look for magical solutions to cure the dysfunctions of their regimes.

And on the street, other echoes are heard. Our “father” did not turn out to be a father at all. Even among Putin’s kleptocracy of ex-KGB men, as among the communist apparatchiks in the dying days of Gorbachev’s rule, there is a growing realization that the jig is nearly up, and that it is time to look after oneself.

So, as Putinism atrophies, the great hope among his immediate circle is that they will be able to do what the communist elite did in the early 1990’s – hijack whatever new system emerges and put it to work in the service of their own interests.