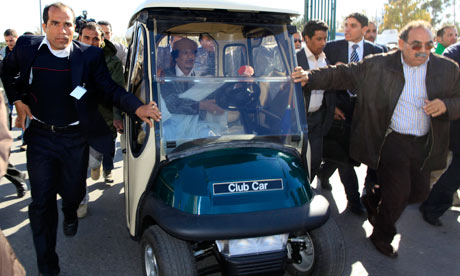 Colonel Muammar Gaddafi has offered an amnesty for rebels who hand back weapons, promising they would be “forgiven and not pursued” even as he warned that his country would be turned into “another Vietnam” if foreign countries intervened.

In a three-hour speech to supporters and international journalists in Tripoli, Gaddafi offered a handful of concessions aimed at those supporting the opposition forces who control more than half the country.

Faced with the threat of armed intervention by the west, he said: “We will enter a bloody war and thousands and thousands of Libyans will die if the United States enters or NATO enters.”

Although the defiance had been anticipated, what was surprising was a series of concessions designed to divert support for the escalating uprising and head off the growing threat of military intervention.

Conceding his almost complete isolation, Gaddafi admitted that the world appeared to be against including India, China and parts of Latin America as well as the US and Europe.

The speech, delivered on Wednesday as Libyan forces attacked opposition positions in the east of the country, bore all the hallmarks of being shaped by his son Saif al-Islam, who has argued in the past for some of the concessions on offer.

Despite his often fiery rhetoric, Gaddafi delivered the speech calmly, in contrast to fist-waving previous addresses in which he threatened to hunt down opponents like rats.

He promised he would not stand in the way of privately-owned media or a constitution for the country – long espoused by Saif – if that is what people wanted. He also offered an inquiry into violence on both sides.

Despite the offer, Gaddafi’s problem will remain one of credibility, not least because of his continued assertion that there had been “no peaceful demonstrations at all”, a view challenged even by some of his own officials.

His critics are skeptical that anything he promises can be trusted.

There is the danger for him too that his shift in tone will be seen as a sign of weakness by the opposition, as was the case with both Tunisia’s Zine Al-Abidine Ben Ali and Egypt’s Hosni Mubarak, who both offered a series of concessions before being forced to stand down.

Gaddafi also invited a commission of inquiry from the UN security council to investigate events, accusing it of making decisions based on “100% inaccurate media reporting”.

Talking of his own position, he said: “Muammar Gaddafi is not a president to resign, he does not even have a parliament to dissolve.”

His third public appearance since the uprising took place in a large ballroom at a ceremony to mark 34 years of “people power”. He said the regime was ready to discuss the challenges confronting Libyans, but that those fighting had not “approached him but chosen to fight”.

Despite the bellicose rhetoric – which included a threat to hand out millions of weapons to his supporters if they are faced with a foreign invasion – he appeared to distance himself from remarks he had made earlier in Green Square, claiming that he was speaking in the language appropriate for the “angry youth” and was now speaking the language appropriate for the international community.

In a highly pointed remark he added that if western companies choose to leave, they would be replaced with “Indian and Chinese companies”.

Also on offer from Gaddafi was the promise of increased financial incentives including low interest grants to build homes, presently capped at 30,000 dinars (£15,000), which would increase to over 100,000 dinars. He added that if Benghazi was peaceful it would receive $20bn (£12.5bn) in infrastructure improvements when the violence subsided.

On some issues, however, Gaddafi’s language had not changed.

He continued to blame a small number of al-Qaida fighters for inciting the rebellion and the international media for bringing the threat of international action through its inaccurate reporting.

He explained that reporters in the country’s east and in Tripoli and the surrounding towns had not encountered al-Qaida because they were staying in the background while the violence raged.

The veteran leader, who once said democracy was for donkeys,told the gathering in Tripoli the world did not understand that he had given power to the people long ago.

“We put our fingers in the eyes of those who doubt that Libya is ruled by anyone other than its people,” he said, referring to his system of “direct democracy” launched at a meeting attended by visiting Cuban leader Fidel Castro in 1977.

Referring to the two-week-old popular uprising against his rule, Gaddafi also called for the UN and Nato to investigate the facts about what had happened in Libya, and said he saw a conspiracy to colonize Libya and seize its oil