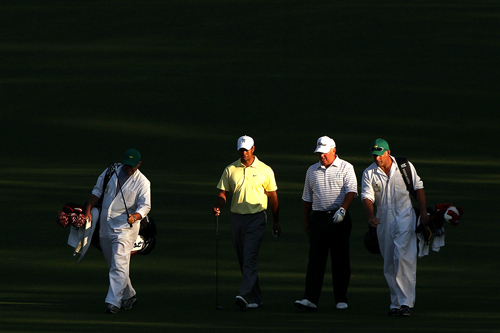 The  shift from Tiger Woods‘s past to his future occurred when he apologised for marital transgressions on 19 February 2010. Casting himself as a modern day Icarus, Woods spoke of the ugliness of arrogance, and the shame of forsaking his parents’ teachings. He acknowledged remorse at the pain he inflicted upon friends, family members, professional associates, and fans. His statement concluded with the hope that his supporters might find a way to believe in him once again.

The public clearly believes. Gambling odds and sports journalists’ opinions converge; Woods remains the best golfer on Earth, and the prohibitive favourite to win the 2010 Masters golf tournament. What is at stake then, is not simply belief, but the nature of belief. Tiger’s recent saga is a revelation because it forces us to focus on the meaning of our support for celebrity athletes.

In an interview on 21 March, Woods admitted he was “a little nervous” about the reception fans would give him. When asked whether he cares about fans’ treatment, he replied, “it would be nice to hear a couple claps here and there. But [I] also hope they clap for birdies too.” In this excerpt, Woods astutely separates fans’ reaction to his presence from their appraisal of his performance.

Tiger knows that fans have little choice but to react positively to greatness. In many cases, our rooting commitments are primarily driven by achievement. We cheer for greatness out of sheer appreciation for mastery, and because cheering for anticipated achievement allows us to bask in the glow of success when it comes. Our vocal and emotional support for a performer is an investment that helps us claim the athlete’s triumph as our own.

On some occasions, however, we cheer because we identify deeply and irrevocably with the athlete in question. Achievement is a secondary consideration, if it is considered at all. Our support is not conditional on greatness, it is simply an affirmation of who we understand ourselves to be. Support for sports teams, rather than individual athletes, is more likely to fit this model. We root for the uniform and team colours because they remain constant. They assure us that we know ourselves, and that we are true to the places we came from and the people we grew up watching sports with.

These two forms of rooting are non-exclusive, and fan allegiance is often a composite of the two. But under ordinary circumstances, an athlete from an individual sport who so flagrantly violates our moral conscience stands little chance of recapturing fans’ hearts. Los Angeles Lakers fans may forgive Kobe Bryant after allegations of sexual assault, but this forgiveness is heavily influenced by team loyalty. For fallen athletes without teams to redeem them, the chances of continued deep identification and affection are slim. It follows that Tiger should be left with the sort of applause he received at practice on Monday; respectful acknowledgment of his greatness, rather than effusive celebration rooted in identity.

The politics of race and ethnicity disturbs this logic in Wood’s case. Non-white bodies are unjustly stigmatised and marked as different and deviant. Through no choice of his own, Tiger’s racial and ethnic composition becomes his uniform and team colours. His non-whiteness is an anomaly in professional golf, and his success foregrounds the politics of race, ethnicity, and class, thanks to the history of discrimination and elitism in country clubs.

For many non-whites, Woods’s success publicly symbolised and confirmed their dignity in the face of racial stigma. For people of all racial and ethnic backgrounds, cheering for Woods becomes an opportunity to identify oneself as an opponent of racism (though social justice requires more than such symbolic affiliations). These are the forces behind Nike’s “I Am Tiger Woods” campaign, and perhaps the explanation for the company’s steadfast support of Woods, when most of his sponsors cut ties. Nike capitalised not only on Woods’s greatness, but on fans’ need to identify themselves as honorable racial subjects. The corporation is betting that this need remains, and that Tiger will recapture his iconic status, as fans cannot forsake the racial and ethnic politics implicitly associated with rooting for him.

Fans and pundits listened closely to the gallery’s initial reaction to Woods’s return, and this weekend will be filled with analysis of the cheers and jeers for Tiger. There will be evaluation of crowd noise with an eye towards closure. Indeed, it is long past time to forsake sensational enumerations and descriptions of Woods’s disgrace. He abused class and gender privilege, and acted irresponsibly – we know this. But the larger story, about celebrity, loyalty, and the politics of fanaticism is not yet over, and it is more our story than his.
By Michael P. Jefferies