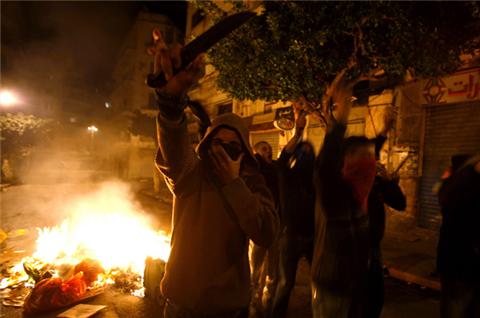 Self-immolation by fire is a rare, another form of political protest, horrific the past few days as number of incidents of men torching themselves have been reported in North African countries – Algeria, Egypt and Mauritania.

The fact that his protest against local authorities helped set off a popular revolt has prompted commentators to ask whether the incidents in the other countries, although isolated, were inspired by the Tunisian event and whether the protesters were aiming to set off a similar chain of events in their nations.

In Cairo on Monday, one man set himself alight outside the parliament building, while another set himself on fire in front of the presidential palace in Mauritania.

On Tuesday, it was reported that a second man had set himself on fire in Egypt, and up to seven men had either tried to or succeeded in setting fire to themselves in different towns across Algeria over a period of a few days, with one reported fatality.

“There is something horrifying and, in a way, moving about these suicide attempts. It’s a shocking, desperate tactic that instantly attracts attention, revulsion, but also sympathy.”
Parallels

Clearly the self-immolation of Mohamed Bouazizi has resonated across the region.
Continue reading the main story
Recent acts of protest

Egyptian blogger Hossam el-Hamalawy told the BBC that people had been comparing the Tunisian political situation with their own.

“There is great interest. The Egyptian people and the Egyptian public have been following the events in Tunisia with so much joy, since they can draw parallels between the Tunisian situation and their own,” he said.

Speaking on Monday after the initial incident in Egypt, Mr el-Hamalawy said the government would try to paint the attempted suicide as an isolated political act by a mentally unstable individual.

The few exceptions include a wave of self-immolations by Kurds in the late 1990s, but these took place in Europe rather than on their home territory.
Protest in Tunis Mohamed Bouazizi became a symbol for Tunisia’s protest

According to Dr Biggs, over the past few decades, hundreds of people have sacrificed their lives in this kind of protest, including Vietnamese Buddhists, Lithuanian nationalists, South Korean leftists, upper-caste Indian students and Kurdish nationalists in Western Europe.

But he says it is “new in this part of the world”.

Dr Biggs says that, in recent times, a more reported method of people sacrificing their lives in the Muslim world has been suicide bombings.

John L Esposito, professor of religion and international affairs and of Islamic studies at Georgetown University and author of the Future of Islam, says Arab countries are witnessing a new phenomenon.

“Historically for Muslims, the act of suicide has always been seen as wrong – in the same way that it has for Christians. But what is happening at the moment has taken on a type of different symbolism,” he says.

Mohamed Bouazizi’s act was being seen as a new expression of resistance.

“The situation for youths in these countries is depressing; the level of loss of sense of purpose is stunning.

Below is a translated version of Mohamed Bouazizi’s reported last Facebook message:

“I will be travelling my mom, forgive me; reproach is not helpful. I am lost in my way, it is not in my hands; forgive me if disobeyed words of my mom, blame our times and do not blame me, I am going and not coming back. Look I did not cry and tears did not fall from my eyes. Reproach is not helpful in time of treachery in the land of people; I am sick and not in my mind; I am travelling and I am asking who leads the travel to forget.”

“What we have seen in these parts are movements towards different forms of resistance, transcending the traditional cultural and religious norms.”

Prof Esposito says that even some Islamic scholars will argue that such acts will not necessarily be seen as simply the taking of a life, but as a demonstration of protest against social injustice.

“The sense of social justice is strongly rooted in the Koran,” he says.

Because Islam prohibits the cremation of bodies, the idea of people setting themselves on fire is all the more shocking.

The spectacle of a violent death in a public place can also have an enormous impact.

“It is a desperate political act but also a very effective one. For someone to do this, they are very committed, the injustices are so serious that it is a credible signal of how bad things really are,” says Dr Biggs.

Mohamed Bouazizi’s own story is likely to have a significant place in the mythology of his country.

“My brother is alive in all of us. He offered us so much, he opened many doors for us because we can smell democracy and freedom now,” his sister Leila Bouazizi told the BBC Arabic service in an interview.

While there is no direct evidence that events in Tunisia triggered those in Algeria, Egypt and Mauritania, Dr Biggs says that, historically, such acts have often been clustered.
Monk’s protest

Dr Biggs says the act of self-immolation as a symbol of resistance really began with the Vietnam War.

Photographer Malcolm Browne’s picture of an elderly Buddhist monk, Thich Quang Duc, engulfed in flames as he burned himself to death in Saigon in 1963, has become one of the iconic images of the war.

In 1965, Alice Herz, an 82-year-old pacifist, immolated herself on a Detroit street corner in an act of protest against the Vietnam War. This was followed by the suicide of Norman Morrison, who set fire to himself on the steps of the Pentagon.

“Herz and Morrison were not simply borrowing a form of protest that originated in Vietnam; they were deliberately re-enacting the fiery deaths of Buddhist monks in order to make the tragedy more immediate for the American public,” says Dr Biggs.
1969 file picture People of what was then Czechoslovakia pay tribute at Wenceslas Square to Jan Palach in 1963

And in 1969, a young university student named Jan Palach initiated the use of this form of protest against the Soviet Union, in an act of self-immolation in Wenceslas Square in Prague. Palach became a legend almost overnight and still has a significant place in Czech mythology.

Death by fire as a form of protest is more prevalent in some countries, such as India, where it is relatively more common. In 1990, there was a massive wave of such suicides against affirmative action for lower-caste quotas.

Generally the response to such acts is one of horror but it is an act that also elicits sympathy, says Dr Biggs.

In many cases, he argues that “those rare individuals who were prepared to die for a collective cause knew that this sacrifice could have a tremendous impact”.

In others, however, those who carry out this very personal form of protest can have little notion of what chain of events will follow.