The flag of Hezbollah features a fist holding an AK-47. The gun has become a symbol worldwide 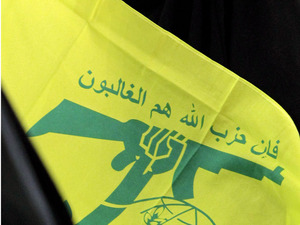 The AK-47 was designed after World War II by the Soviets, who issued the guns to the Communist army’s conscripted forces. In the past few decades, the AK-47 has become one of the weapons of choice for many groups — and one of the most commonly smuggled weapons in the world.

One of the first true assault rifles, the AK-47, or Kalashnikov, was designed for soldiers who have to endure terrible conditions on the battlefield: it’s light, it can carry a lot of ammunition and it can withstand harsh weather and poor handling. The gun’s design and ubiquity also have made it popular amongst small arms dealers — as well as insurgents, terrorists and child soldiers.

C.J. Chivers, a Pulitzer Prize-winning war correspondent for the New York Times, has encountered the Kalashnikov while reporting from Afghanistan and Iraq. His new book, The Gun, traces the migration of the AK-47 across the world, detailing the consequences of it’s spread.

pretty hard in many parts of the world, particularly in Afghanistan, to go [into] territory under insurgent control, and not be ambushed by Kalashnikovs,” says C.J. Chivers. “Their numbers are so outsized that this is quite a common experience.”

One estimate by the World Bank suggests that 100 million of the 500 million total firearms available worldwide are variations of Kalashnikovs.

Chivers has covered wars in Afghanistan, Iraq and Chechnya, and served as the New York Times’ Moscow correspondent from June 2004 through mid-2008. He also served as an infantry officer in the United States Marine Corps from 1988 to 1994. He received the Livingston Award for International Journalism for his coverage of the collapse of commercial fishing in the North Atlantic and shared a Pulitzer Prize in 2009 for his dispatches from Afghanistan and Pakistan.

Why child soldiers favor them:

“It’s out there. And the weapon that’s out there is the weapon that tends to get used. But the other reason is the design. It’s very, very simple. It’s almost intuitive. You can take it apart very quickly and put it back together just as quickly. It’s simple to clean. It’s simple to maintain. Most of the Kalashnikovs out there are very well made for the actual conditions of war. It has an excellent protective finish. It’s chromed on the inside of its barrel and its chamber. All of these things mean that if you’re not particularly attentive in caring for it, it’s still going to last and it’s still going to work.”

On the invention of the AK-47:

“It was a weapon that was designed to be issued to the Communist conscripted forces. It was going to be the standard shoulder firearm. And the Soviet Union was really quite brilliant at copying its enemies patterns. … The AK-47 was basically a conceptual knockoff — a copy of a Germany idea, which was to take a cartridge midway in size between those used by pistols and those used by the traditional rifles of the time and to take this medium powered intermediate cartridge and build a weapon around it. And this brought several technical advantages. With a lighter-weight cartridge, you could carry more ammunition, which meant each solider could be more effective and could last longer in a fight because he would have more ammunition in his pack or kit.”

C..J. Chivers is a war correspondent for the New York Times. He won a Pulitzer Prize in 2009 as part of a team of reporters and photographers reporting from Pakistan and Afghanistan.